THE MAN WHO MADE COUNTRY MUSIC SPARKLE

Nudie Cohn has been an inspiration since before we even knew his name. All the over-the-top suits of the era – Porter Wagoner, Elvis, Elton John, Hank Williams – we loved them all, without even realizing they were all the creations of the same out-of-the-box visionary. The designs were unexpected, and the genius behind them was perhaps even more so. 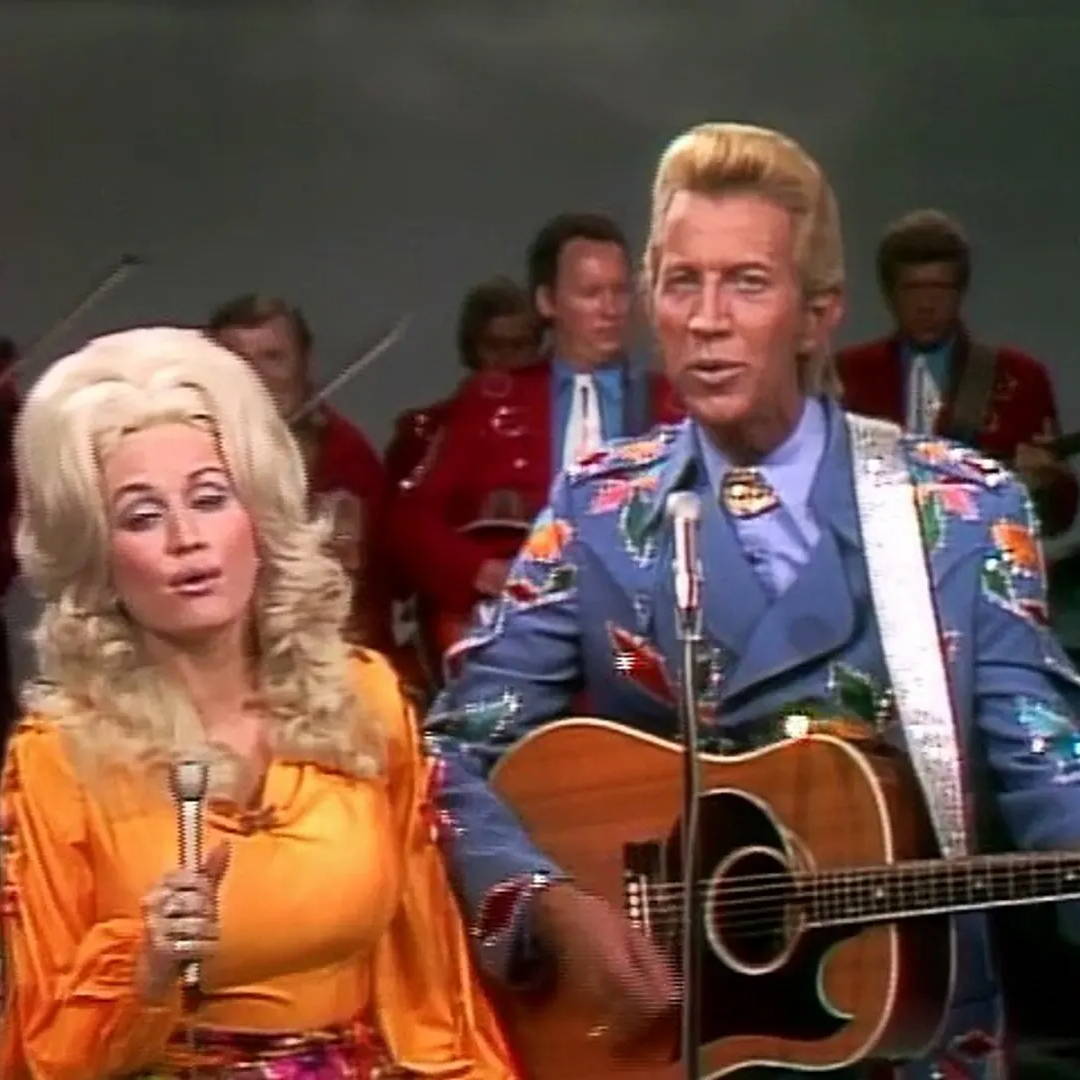 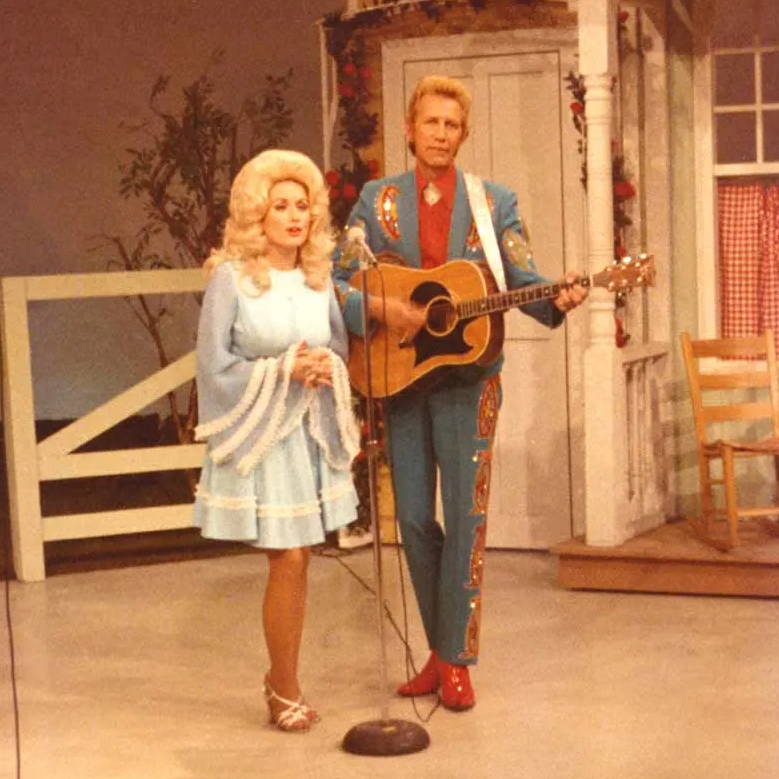 Who would’ve thought the man that would revolutionize the world of western wear and transform the look of country music would be an immigrant from Kiev? His story is truly one of the American dreams, of emigrating to America with the promise of a better life, and of starting with nothing and determining his own success. Nudie Cohn, originally Nuta Kotlyarenko, was sent to America along with his brother Julius at the ripe age of 11 years old. (Yes, “sent”. As in, didn’t go with them; just these two unattended minors on their own.) His name reportedly became Nudie Cohn as a result of a mispronunciation of his name at Ellis Island upon his arrival to the US, and so he carried on with it. (The eclectic name eventually came to suit him and his style quite aptly, if you ask us.)

Nudie spent his first several years in America crisscrossing the country, making his way as first a shoeshine boy and eventually as a boxer. (It is rumored that he developed a friendship with gangster Pretty Boy Floyd.) In 1934, he married his wife Helen “Bobbie” Kruger, and shortly after, the newlyweds moved to New York City and opened their first sartorial endeavor: Nudie’s for the Ladies. And it was pretty much what it sounds like; Nudie made custom undergarments for showgirls. Hey, somebody had to do it. 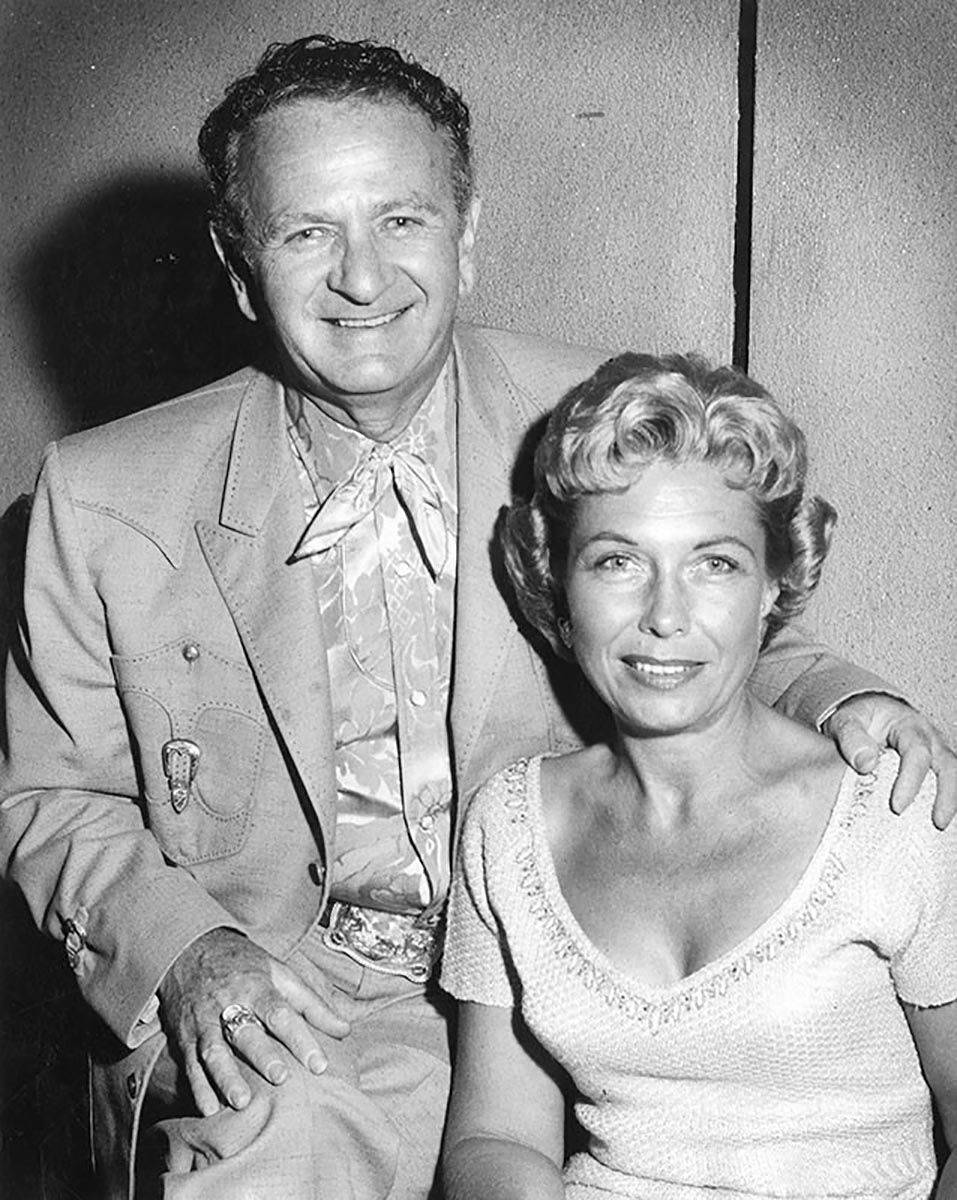 They made their way to California in the early ‘40s, and Nudie and Bobbie started designing and making clothes in their garage. (Well that sounds familiar…) Ever the resourceful entrepreneur, Nudie made an arrangement with his friend, musician Tex Williams, in which Tex would purchase Nudie a sewing machine in exchange for Nudie making him clothes. That was 1947, and it was arguably the turning point in Nudie’s career.

With Tex Williams as a walking billboard for his clothing, Nudie’s designs quickly grew in popularity. It wasn’t long before he and Bobbie opened up a storefront in North Hollywood, appropriately named “Nudie’s of Hollywood”. Unlike his NYC shop, Nudie’s of Hollywood manufactured and sold western wear, and this was when Nudie began developing the style he would eventually become famous for, embellishing his garments with rhinestones and bold embroidery of themed images. 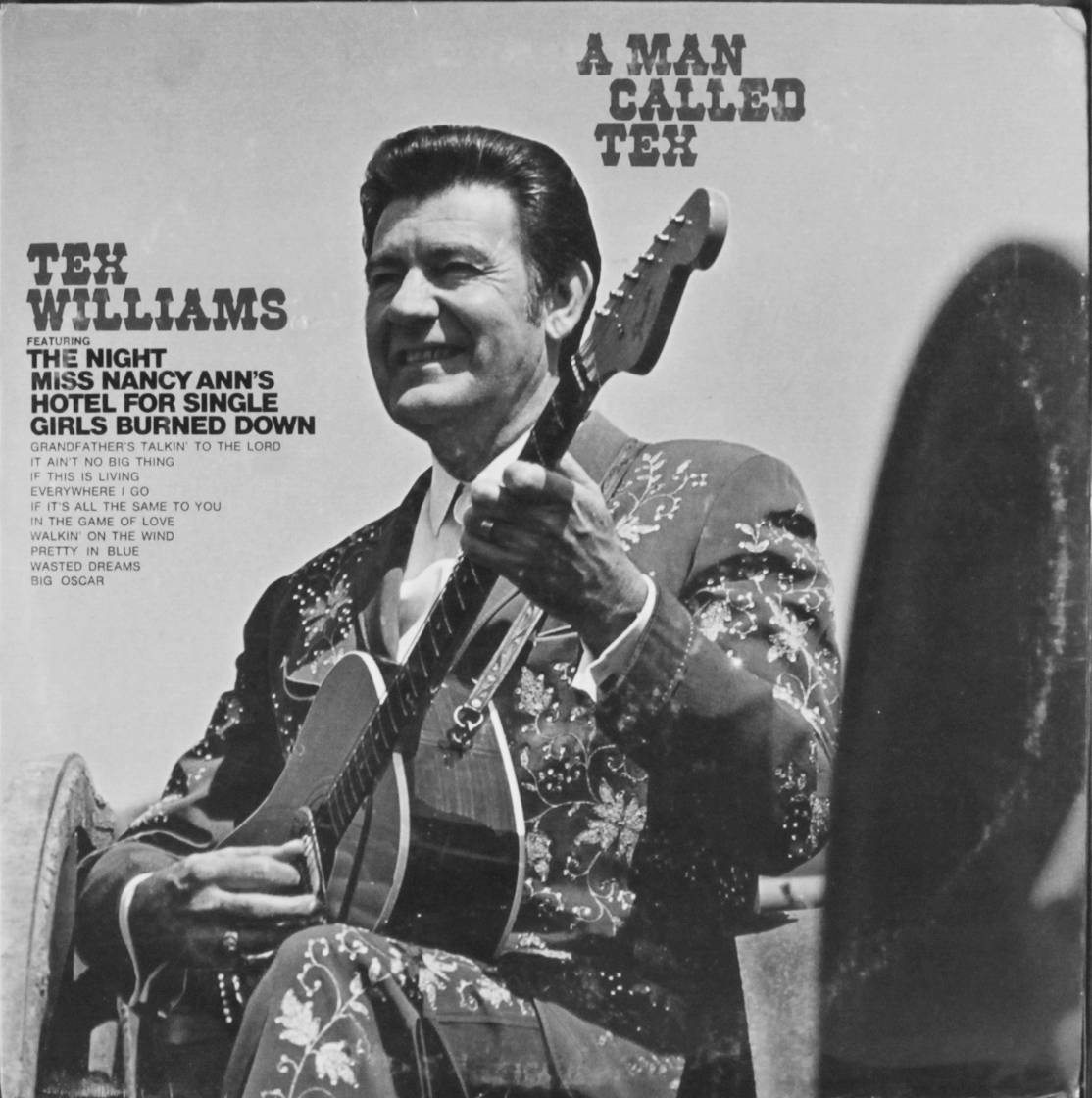 While his following steadily grew over the years, it can be argued that 1962 was when Nudie’s career really took off and his signature style became widely renown and instantly recognizable. Nudie got connected to Porter Wagoner (likely through Tex Williams) who had become a household name in America thanks to his popular television show. Nudie agreed to make Porter a custom suit, free of charge, if Porter would wear it on his show. He did, and Nudie’s little organic advertising idea paid off. People took notice of the flashy, blinged-out suit, and soon Nudie was dressing everyone from Hank Williams to Elton John to Elvis. (Fun Fact: you know that gold lamé suit that you always associate with Elvis? That was a Nudie original, and it cost $10,000.) Nudie became almost as famous as the stars themselves, and some of his work is currently in the Country Music Hall of Fame in Nashville. 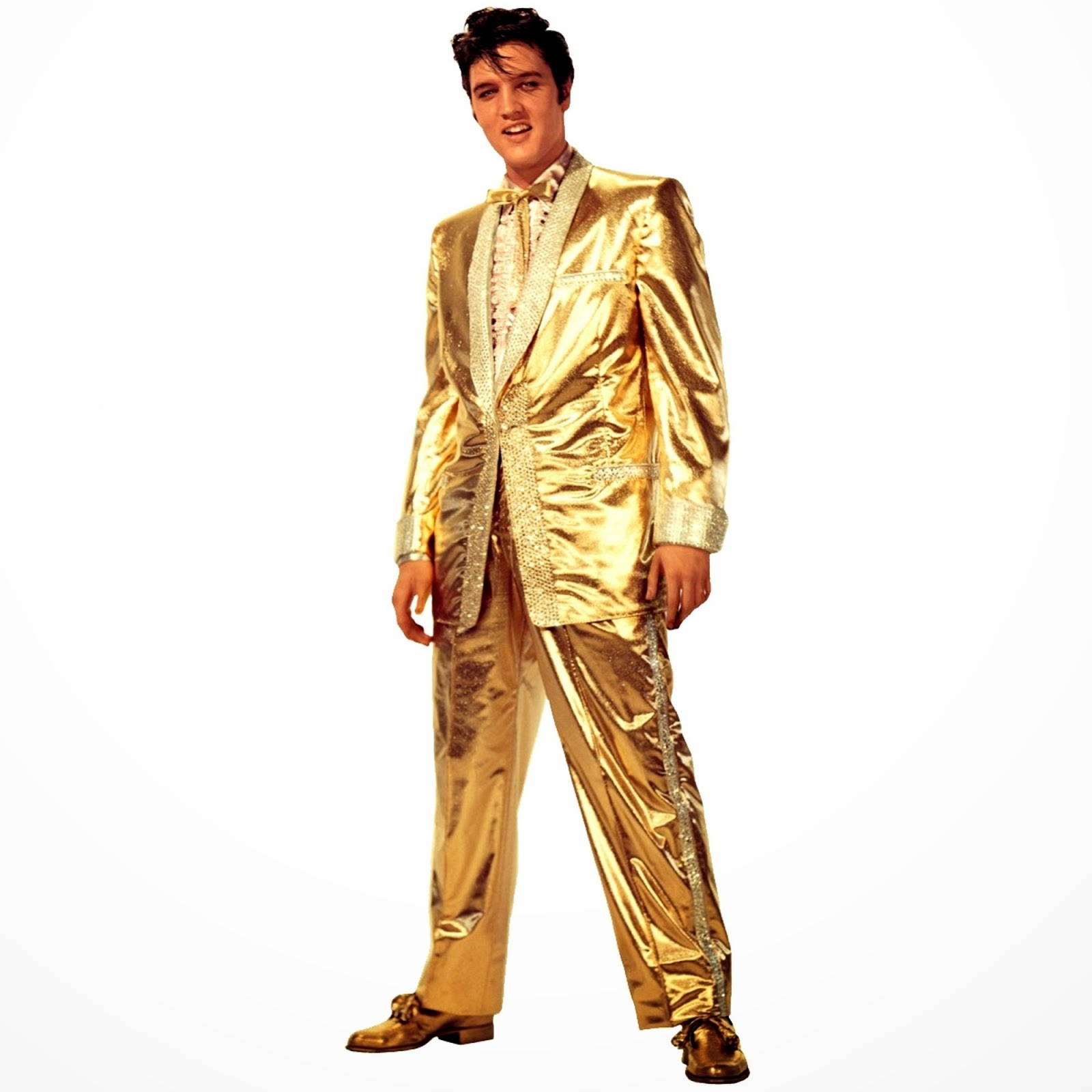 Nudie’s signature aesthetic sparked a dramatic shift in the style and look of country music and the fashion world in general. More and more artists sought to stand out in terms of their outfit, and because trends tend to trickle downward, that blingy, twangy western look had gone mainstream. While no one could ever truly duplicate what Nudie did, his daring creations have had an indelible influence on designers, decade after decade. Including us. 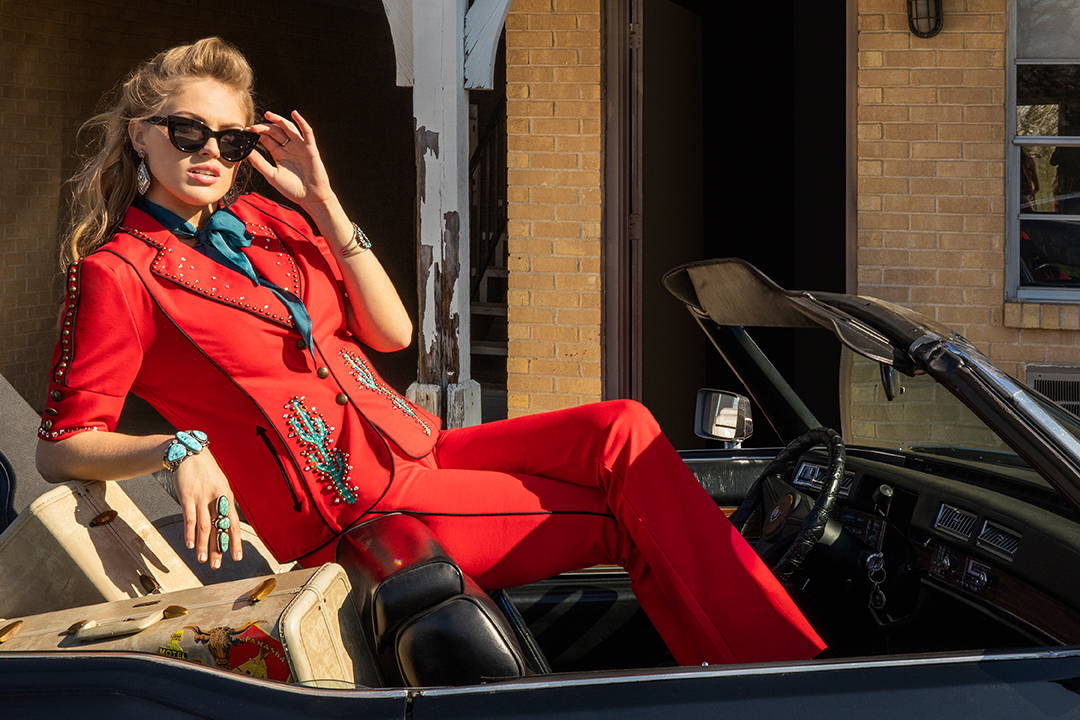 You first got a taste of our Nudie-inspired suits in Midnight Cowboy, with that mint green Warhol’s Suit everyone fell in love with, and then in Backwoods Barbie when we really spotlighted the black version in the Grand Ole Opry portion of the collection. In Bakersfield, we bring you a whole new version: the Rodeo Trails Jacket, Pants, and Shorts. It’s that same showstopping silhouette, but where the Warhol was all feminine floral embroidery, the Rodeo Trails is all prickly cacti blinged out with beads and studding and rhinestones. It’s just a little flashier, a little edgier, a little twangier. And a whole lot of fun.

Like we said, no one could ever duplicate what Nudie did, but we sure have enjoyed putting our Double D spin on it. 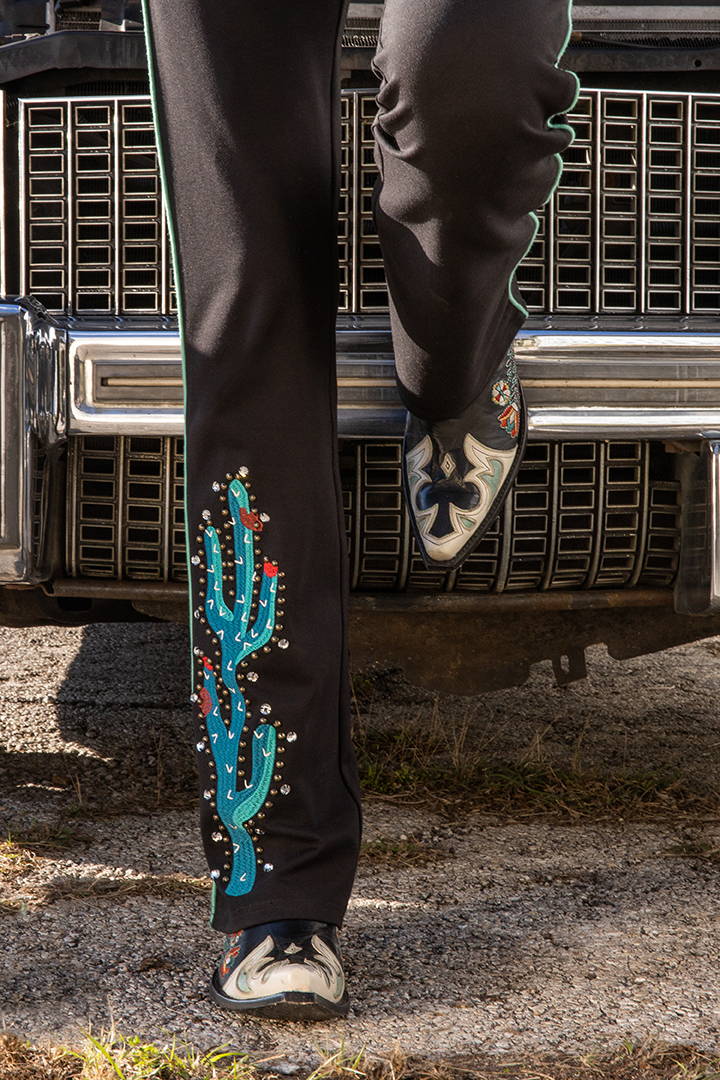 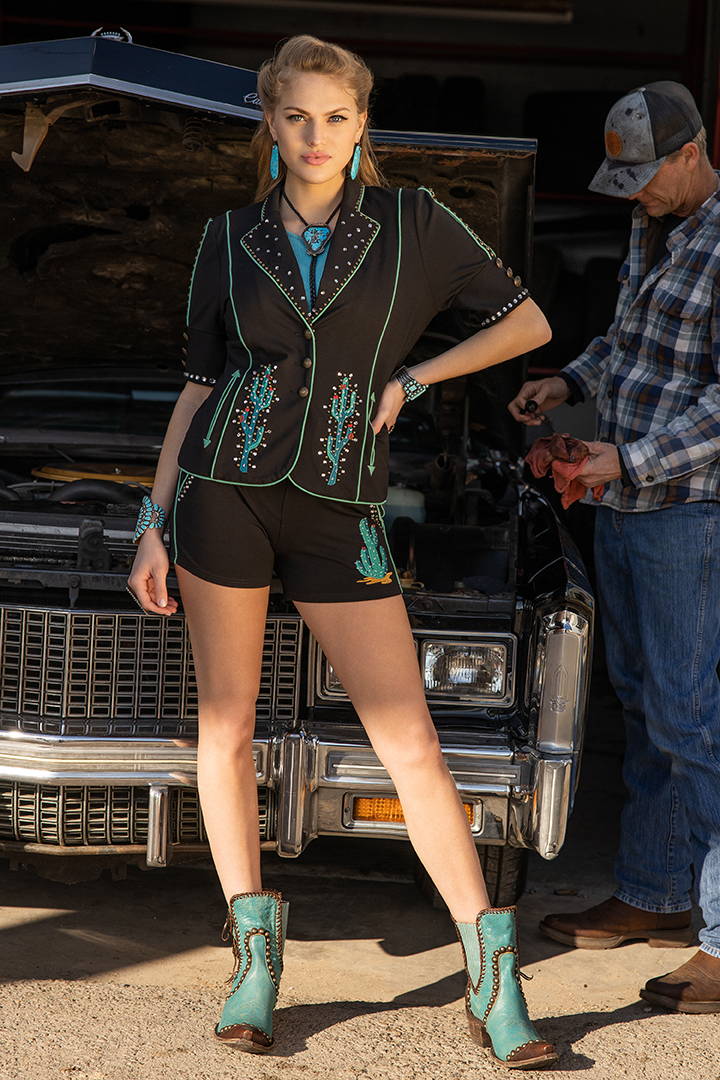 MORE ON THE LEGEND, NUDIE COHN

Love Love!!! I adore Nudie suits! Thanks for a great article and for doing your part in keeping the Nudie suit concept alive with your wonderful designs.

Extraordinary and a whole lot of fun! Thanks for sharing Ladies!

GREAT DOUBLE DOSE! Especially The Nudie Story section and the video clips. I enjoyed this so much! I’m still smiling… Thanks for including it. Love our DDR family and fun. Sparkle on, everybody! ❤️

Its seriously gaudy, but absolutely SPECTACULAL!! I just love it!!!♥️♥️♥️