It’s shenanigans sharing time! Nothing short of a GoPro strapped to one of us could truly capture the experience of a photoshoot, but we do enjoy bringing you behind the scenes highlights (or low-lights?) so you can get a glimpse and a giggle at all the not-so-pretty that went into making the photos oh-so-pretty.

If you recall, Maria was mild; the weather cooperated, the accommodations were exquisite and almost effortless. We had like, one bee and one sunburnt nose. That was it. It was like the unicorn of photo shoots. 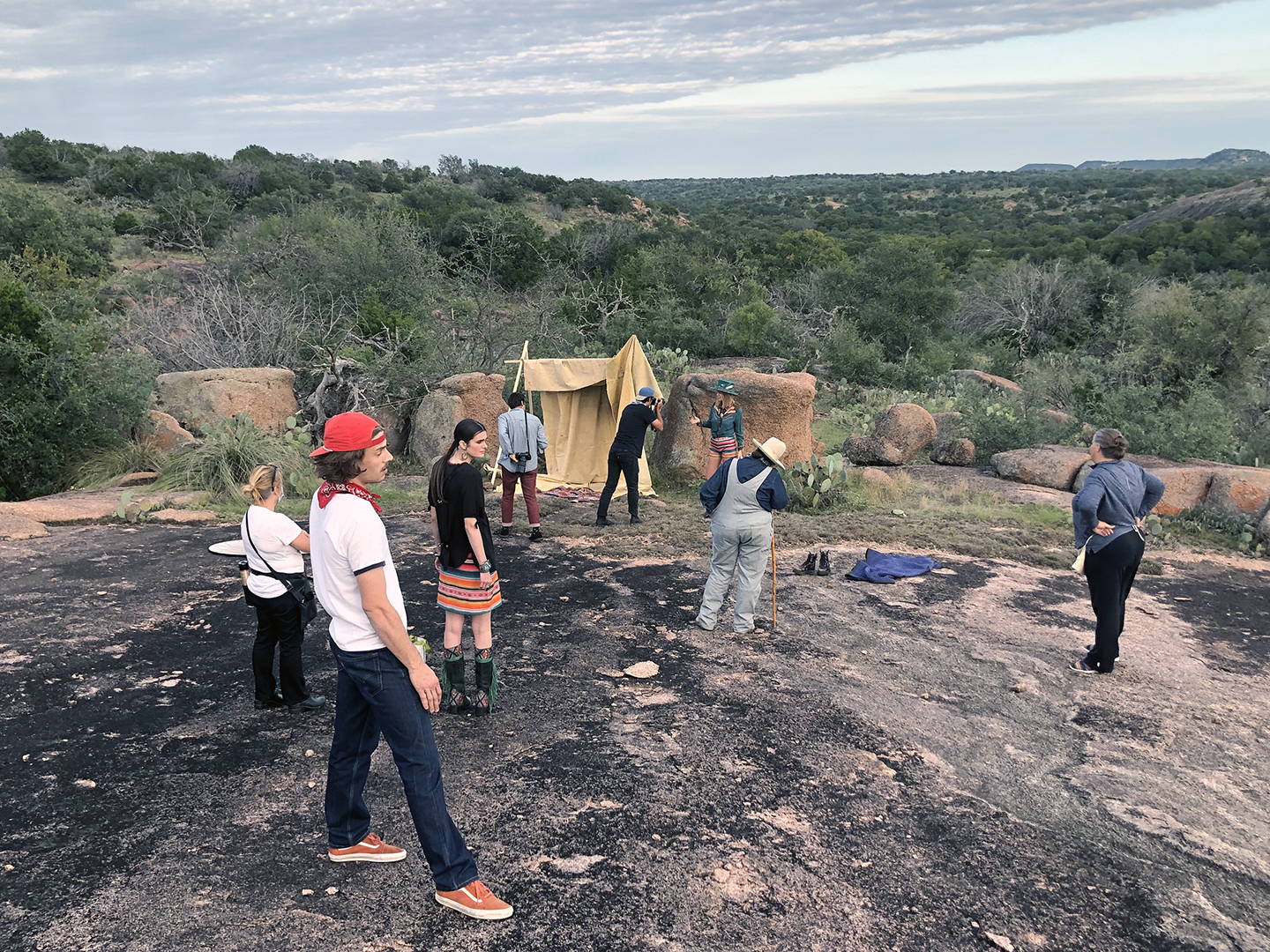 For starters, we were without our go-to photographer, Mitchell Franz. Sadly, right before the shoot was scheduled to commence, Mitchell lost his beloved grandfather (Audrey’s father-in-law) to whom he was remarkably close. In his absence, we enlisted the talents of Nico Paprota, who often serves as our digital tech on photoshoots, so he is no stranger to the company, the team, or the strenuous demands and high expectations from our photo shoots. And he, in turn, brought along his own tech who, incidentally, was also named Nico. To avoid confusion – and because we can’t resist a nickname – we took to calling them Big Nico (photog) and Baby Nico (assistant), despite being a mere two years apart in age. [FUN FACT: Big & Baby Nico have been friends their whole life; their dads were best friends who played professional soccer together and now co-own a restaurant in Austin.]

So, while our hearts were hurting for our Mitchell and we missed him on set, we were still in capable (and lovable) hands. We made the proverbial lemonade and it was more of a hiccup than a roadblock. Onward and upward… way, way upward, as it turned out.

You know how several of the Cynthia shots were on a background of nothing but beautiful blue sky? Yeah, that’s ‘cause we were literally on top of a mountain. We shot Cynthia on Enchanted Rock, outside of Fredericksburg, and well, it wasn’t exactly easy to get to. Big Nico ended up saving the day in more ways than one, because without his 4WD FJ Cruiser, we’d have been in a world of hurt getting up that steep and terrifyingly treacherous terrain. As Hedy eloquently said of the trek to the top, “If we were cans of paint, we’d sure be well-mixed!” 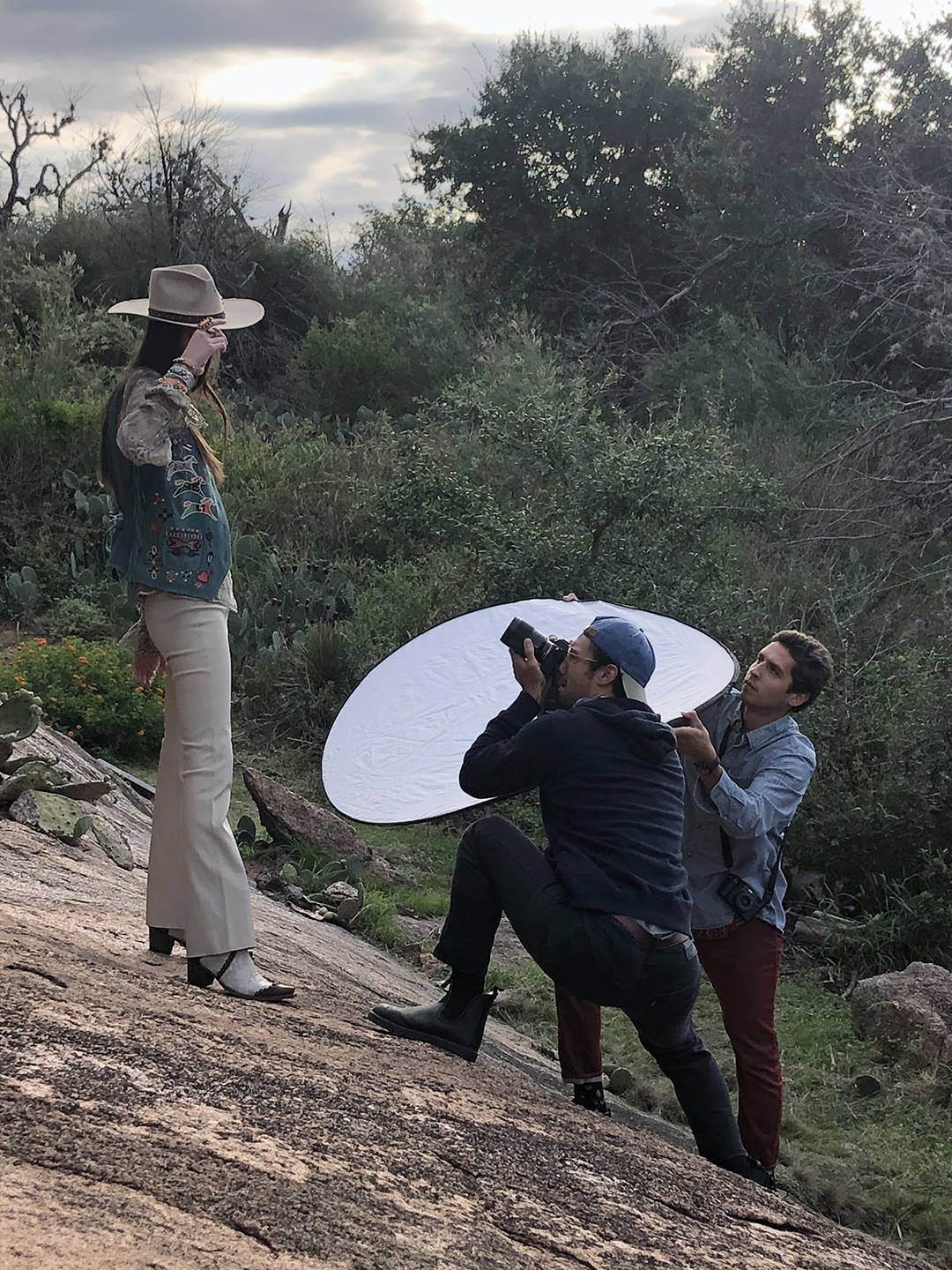 By now, y’all know that our little brunette beauty, Kaylin, is a Texas girl, and she’s been with us a long time, so she is no stranger to our on-set shenanigans or to the unruly wildlife of South Texas. You probably also know by now that our little blonde bombshell, Lozzie, is a Los Angeles gal who is still often fascinated and sometimes a little leery of our critters here in the Lone Star State. She (reasonably) was a little timid as she exited the car (at the closest spot we could safely drive) to trek to the spot to shoot.

Lozzie: Ummm… Jack… Are there going to be snakes?

Audrey: No, no, Jack… they said they’ve never seen a poisonous snake in 14 years.

[P.S. We did end up seeing a snake. Hedy spotted one in the creek. It minded its own business; no harm, no foul.] 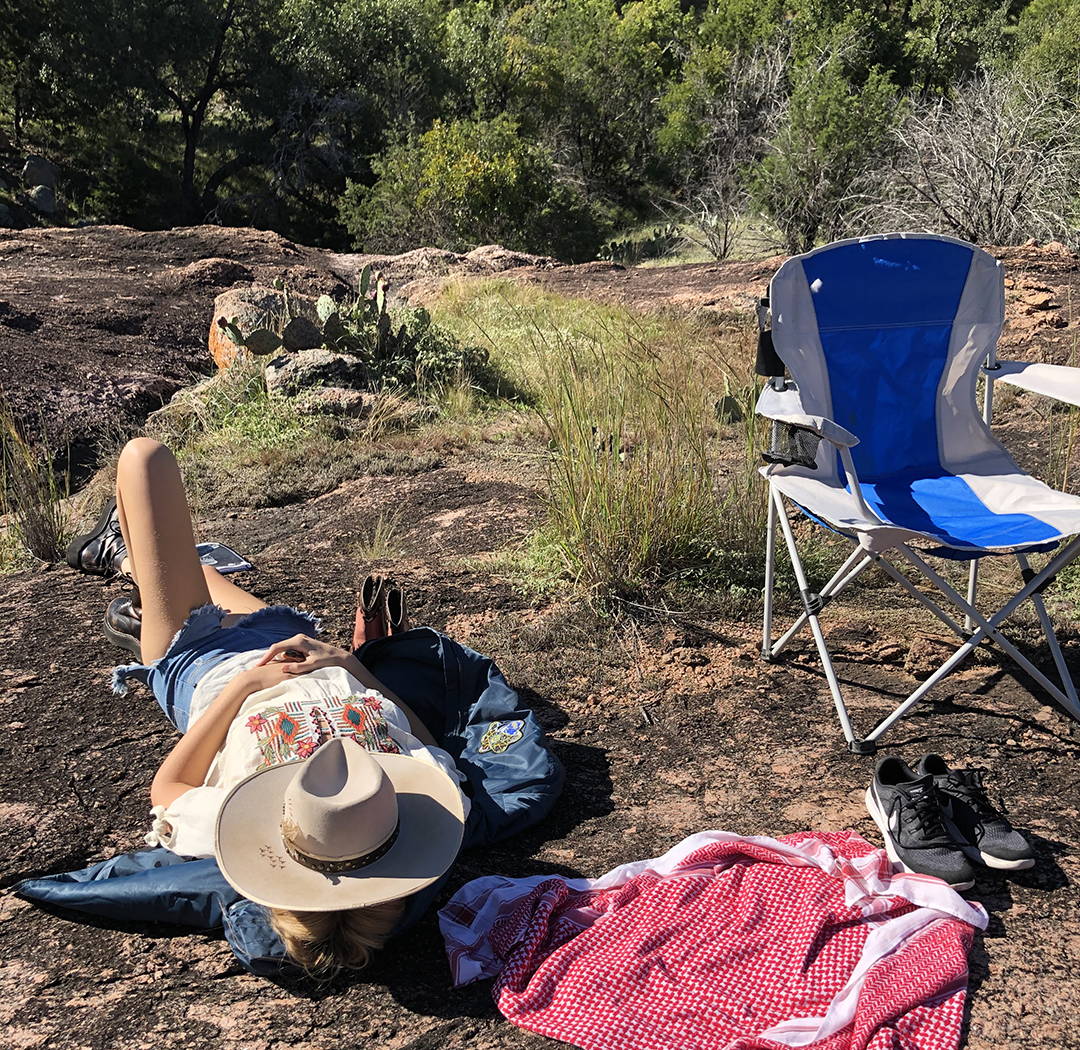 You know what else you find in wild Texas terrain? Cacti. No lie, within 2.5 minutes of arriving, Halley was already picking quills out of her leg. And, while everyone got a good laugh at the time, by the end of the shoot every single person ended up doing the same.

And another thing that goes along with being in the middle of nowhere: no cell service. No service of any kind. You could get a teeny bit of WiFi if you were standing on the porch of the house, but other than that – nada. Sure, sometimes it’s nice to get off the grid, but man, it can sure make the logistics difficult when you’re on a working location. Like, ordering lunch for instance. Someone (Halley) had to climb to the top of the mountain to get enough service to call it in in the first place, and then if anyone needed to reach you to indicate a change of plans or meeting spot, well – You’re SOL. Two days in a row, we sent Halley to meet the delivery driver. And two days in a row, we had to send Jack to go fetch her because she was at the wrong gate. Not sure how we managed before cell phones, but we’ll sure never take text messaging for granted again! 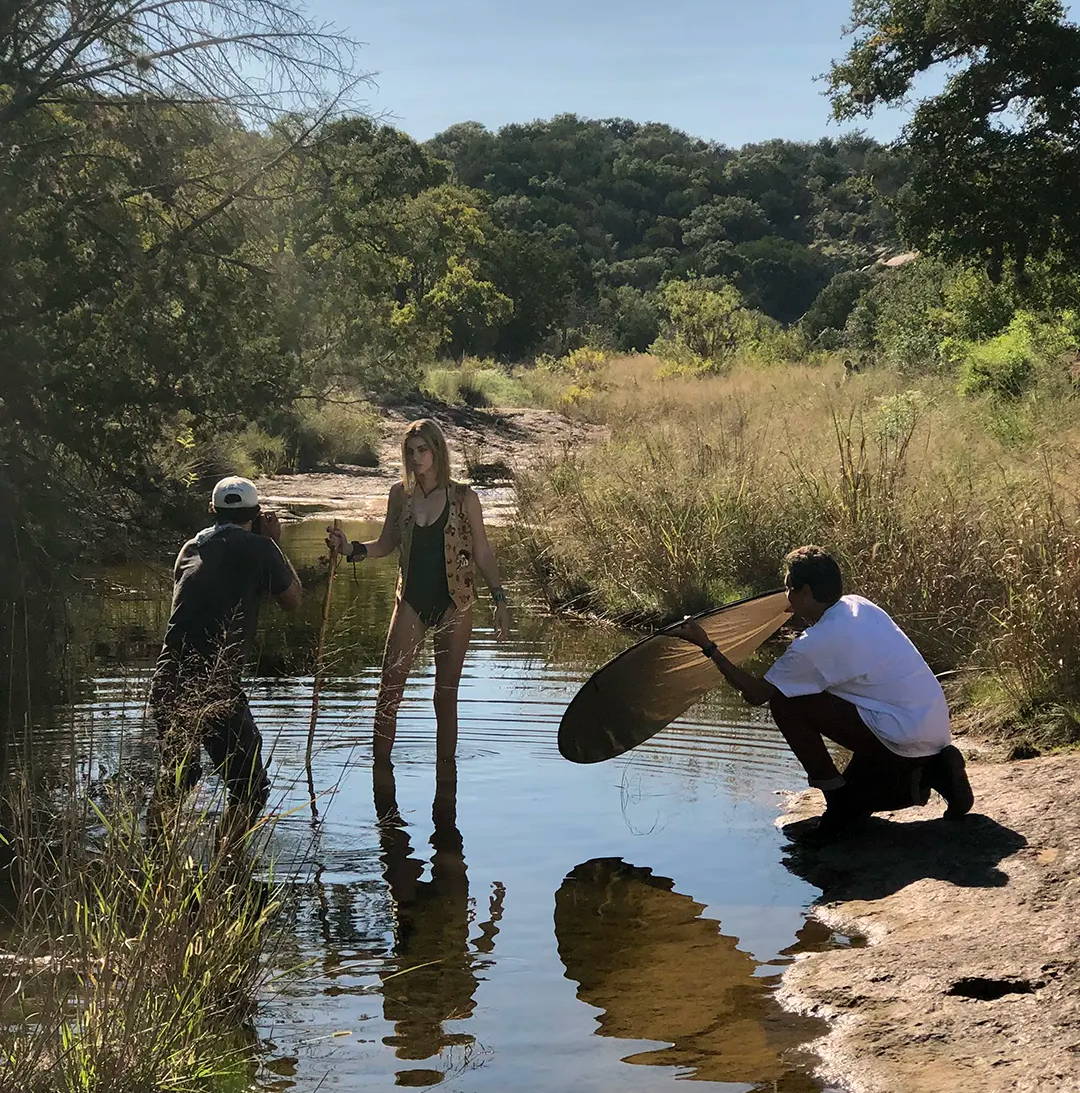 And of course everyone’s favorite intel from behind the scenes of any DDR gathering: what we’re eating.

There is never any shortage of snacks on a shoot – we don’t have time for people to be hangry. There are always the usuals: Cheetos, Doritos, mini Snickers bars, and an assortment of pickles and olives. And Hi-Chews, which if you don’t know what they are, seek some out immediately – they’re delicious. Now, since Audrey had introduced Halley to Hi-Chews, Halley wanted to introduce Audrey to AirHeads. It didn’t go well. “Ohhhh no, no, no, honey. You shouldn’t eat these. These aren’t food. What is this made of? No, no, no.” (Fine. Maybe it was a middle school nostalgia thing. To each their own.) 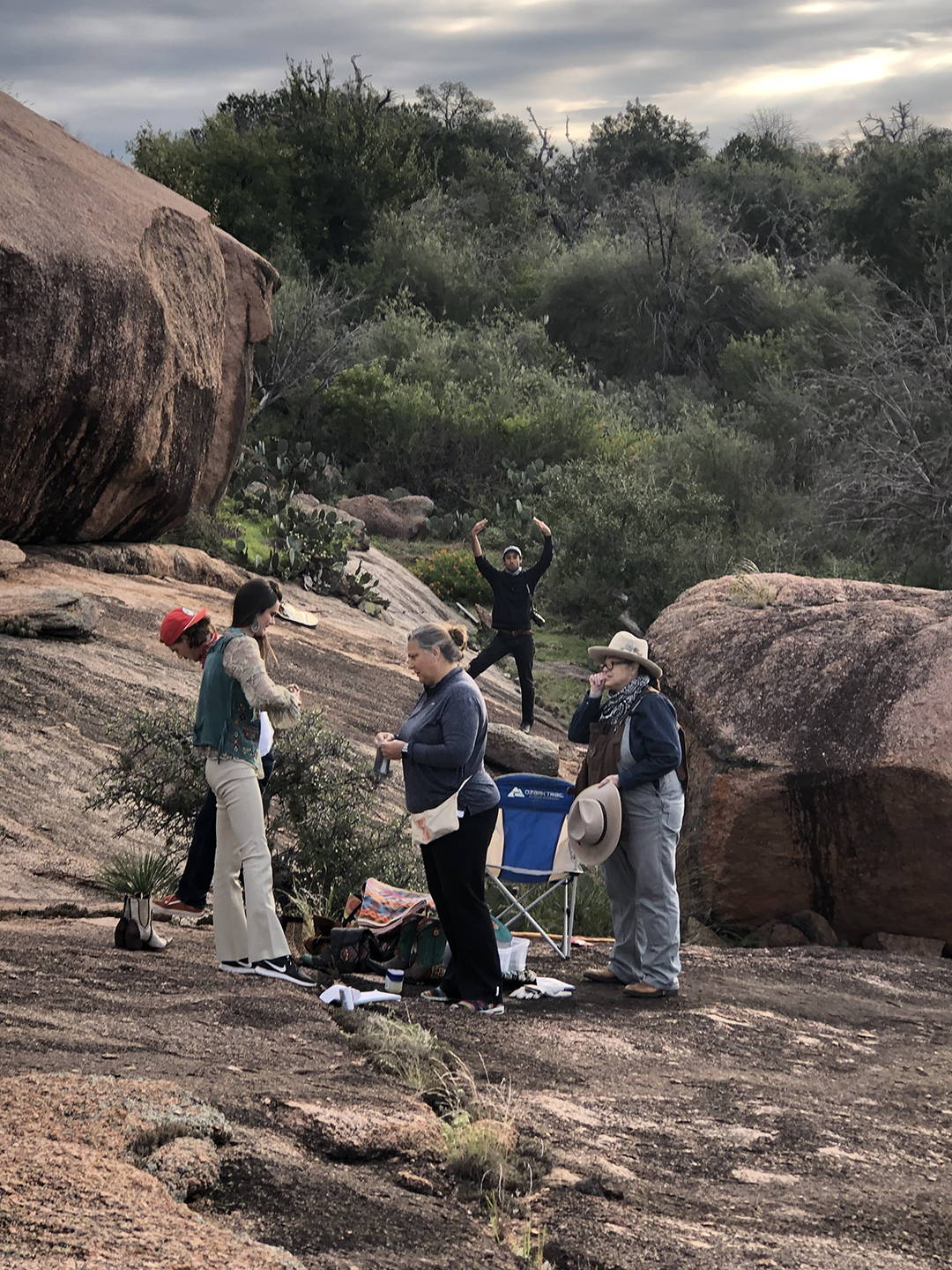 But, after a million trips up and down (AppleWatch says 60 flights of stairs!), balancing on slippery rocks knee-deep in a creek, and about a hundred cactus pricks, we had Cynthia in the can. As always, we swore we were never doing another shoot. And, as always, the trials and tribulations fade to distant memories when we hold the pretty pages in our hands and oooh-and-ahhh in admiration. Every. Single. Time.

Thank you so much for doing this. I would have enjoyed 10 times as many photos of the photo shoot.
Best wishes,
Maris Whitaker