The Jewelry Junket collection is, of course, all about jewelry. And while the love of southwestern jewelry is a pretty universal bond among this sisterhood, perhaps no one celebrates it more than – or quite like – Miss Alice Fisher*!

If you’re a member of Double D Addiction, you’re probably at least somewhat familiar with this colorful character – and might’ve even met her at the Mothership Meetup last July – but we’re looking to shine a spotlight on this gummy bear-loving, tequila-sipping sweet soul and her bold sense of style. 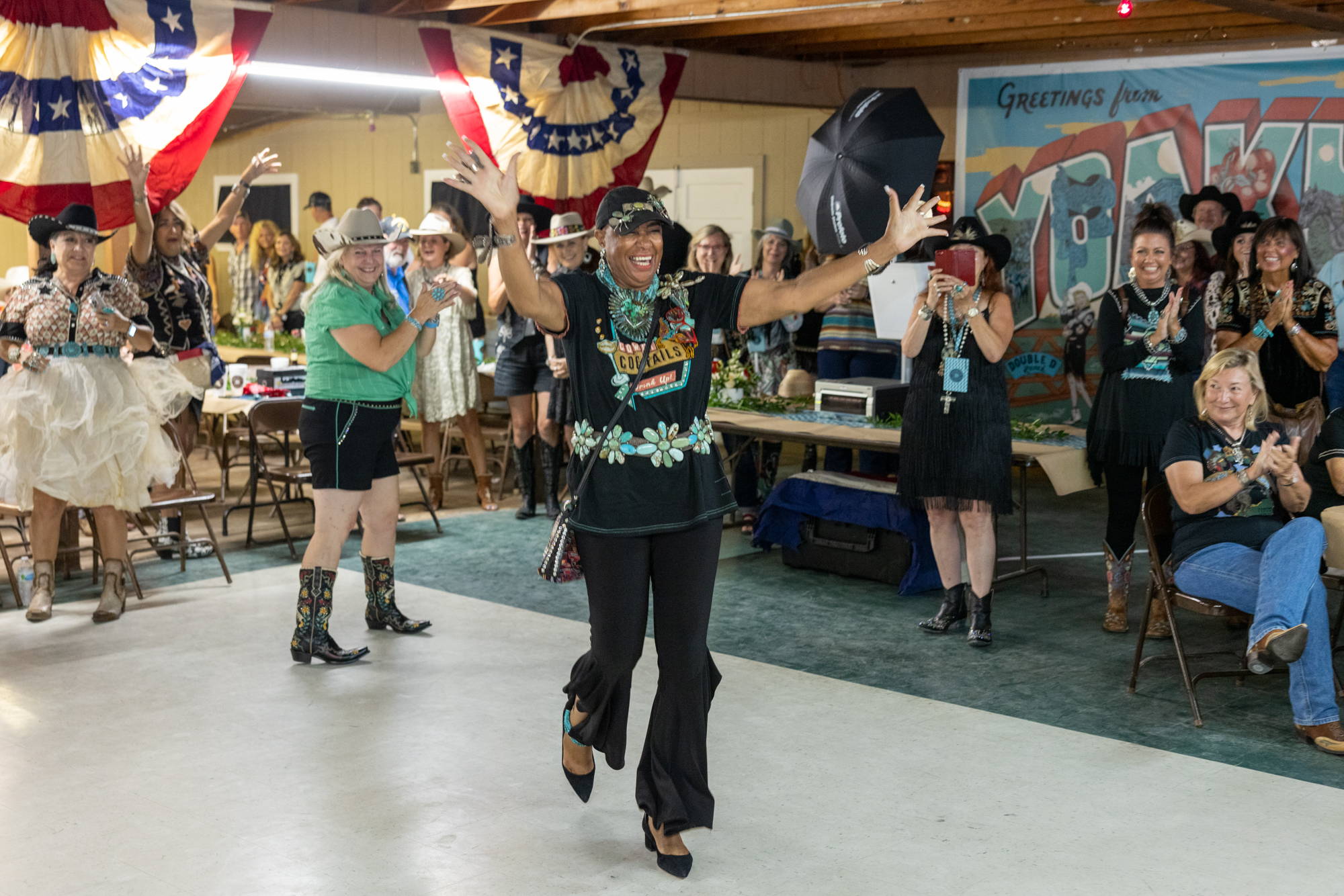 A native Texan like ourselves, Alice grew up in Oakwood (a little town of less than 1,000 people about halfway between Waco and the eastern Texas border) in a loving Christian home as the youngest of four siblings.

“We grew up living by and practicing the Golden Rule,” Alice shared. “I always had endless love, support, and encouragement from my parents. They are the core of my being!”

And that support spurred her quite a long way. *We like to call her “Miss Alice” as a term of endearment because it suits her jovial and congenial personality, but respectfully, she’s actually – and quite impressively – Dr. Alice Fisher. After graduating Oakwood, she earned her Bachelor’s Degree and a Master’s in Education at Sam Houston State University before obtaining her Doctorate in Administrative Leadership from Texas Southern. Before retiring, she dedicated 40 years to her career in education, including as a public school teacher, a criminal justice educator, and university professor.

As if that hasn’t impressed you enough, Alice has brains and beauty! A pupil of the Ben Shaw Modeling Studio in Houston, she was not only a role model but a real model.

“I became recognized as ‘the Modeling Educator’ throughout the community,” Alice laughed. “I would teach during the week and model on the weekends.” 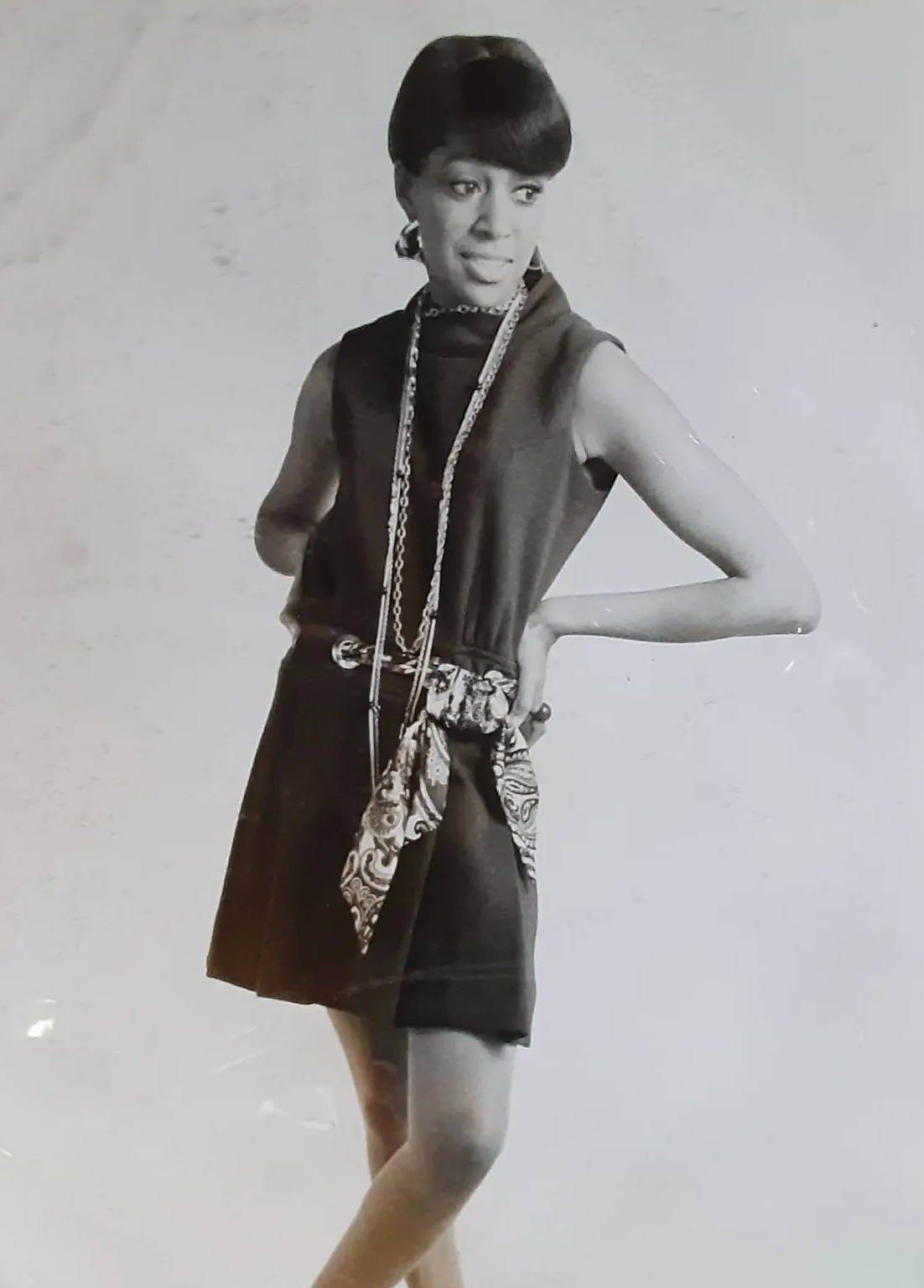 Perhaps that contributed to and fostered her lifelong connection to fashion, confidence, and style.

“Vibrant, free, bold, chic, and constantly emerging,” Alice said of her style. “I love wearing bright colors and brilliant hues. And I can never have on too much jewelry, as can be seen in my photos. Turquoise is my favorite; I wear it daily and the more the better! Wearing Turquoise is definitely my signature; it’s in my DNA, I never leave home without it.”

Obviously, we feel the same way about turquoise – we wrote it into our mission statement and we’ve basically designed a whole collection around it – but what is it about the southwestern stone that resonates with Alice?

“It goes with everything and add a natural pop to any and every outfit,” she said. “And I love the energy and the uplifting vibes I get when wearing turquoise. No other jewelry brings me such joy and sheer delight as turquoise does.” 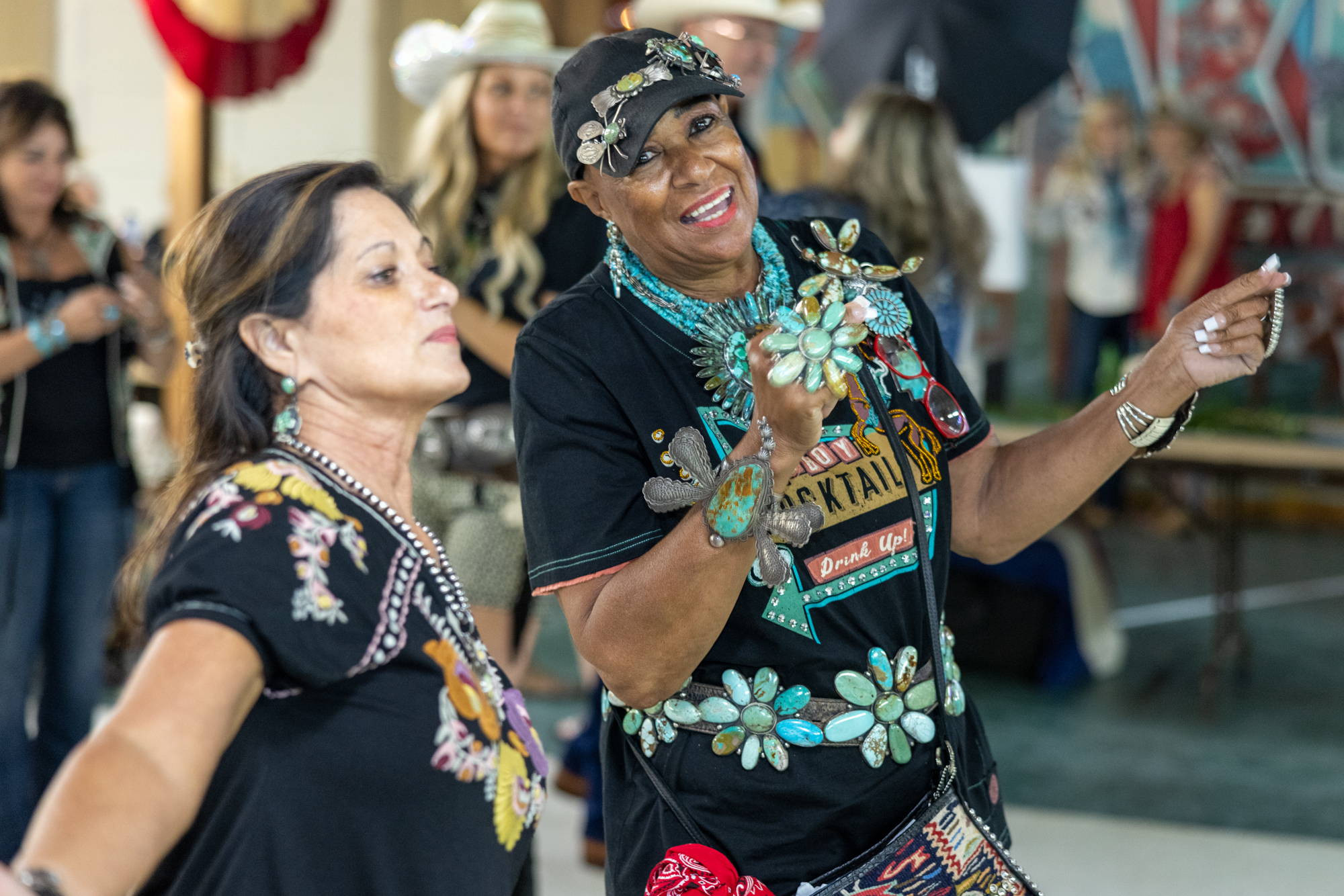 Well said and we couldn’t agree more! We distinctly remember falling in love with the look of statement squashes and ladies loaded up with turquoise from our days as little girls running around at the All American Futurity in Ruidoso, so we are always interested to know if there was a seminal moment in a Wolfie’s life that ignited their love for jewelry.

“My discovery of jewelry occurred at an early age,” Alice recalled. “I was about 6 [years old] and remember looking at a photo of my grandmother, my mother’s mother. She was wearing a beautiful turquoise brooch. The photo was in color and my eyes were drawn to the light blue stones. I never forgot that image nor wavered in my desire to have a brooch like that one day. Sure enough, my first turquoise purchase – and all-time favorite piece – was a brooch very similar to the one my grandmother wore in that photo.”

And just like that, the bug had bitten. Alice was instantly afflicted with a lifelong condition we know all too well.

“I was hooked!” Alice said. “I was addicted to turquoise and had no desire for a cure! As I traveled throughout the southwest, I would purchase all that I could, and I would wear it all daily. I soon became known as ‘the Turquoise Lady’ and to this day, I’m still recognized as such.” 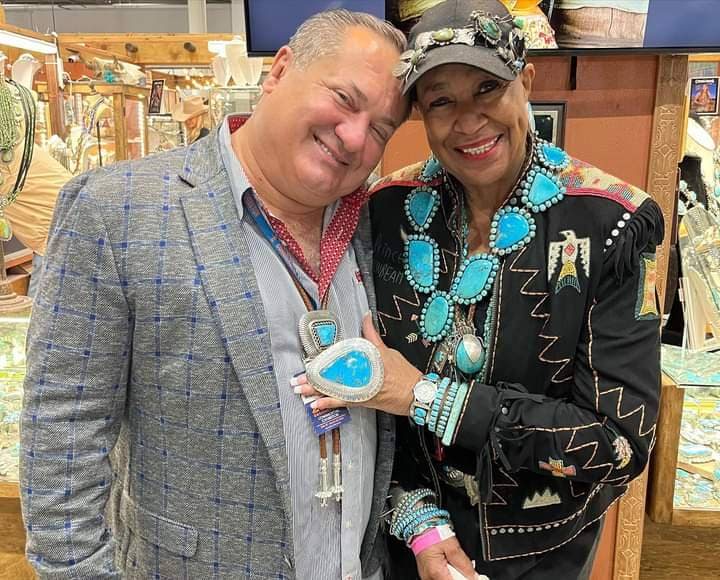 Now that’s a moniker we can all aspire to! And it’s true; before we were on a first-name basis with her, and even still sometimes when we’re describing her, we say something along the lines of, “You know, the lady with all the turquoise!” It appears to be a nickname that’s gonna stick.

“I have been an active collector of turquoise since the mid-‘70s,” she said. “And I continue to enjoy finding treasure to add to my collection. There’s not a particular piece that I’m looking for right now, but it seems the spectacular pieces always seem to find me!”

While her jewelry collection predates DDR’s existence, Alice has had an eye for the brand almost from our beginning.

“It was in 1995,” she recalled. “I was shopping with a friend in Decatur, Texas, and I discovered this awesome brand called Double D Ranch in an amazing boutique. I could not believe what I was seeing and I loved everything I saw. From that initial introduction, I began to look for DDR clothes in various boutiques and shops throughout the southwest.” 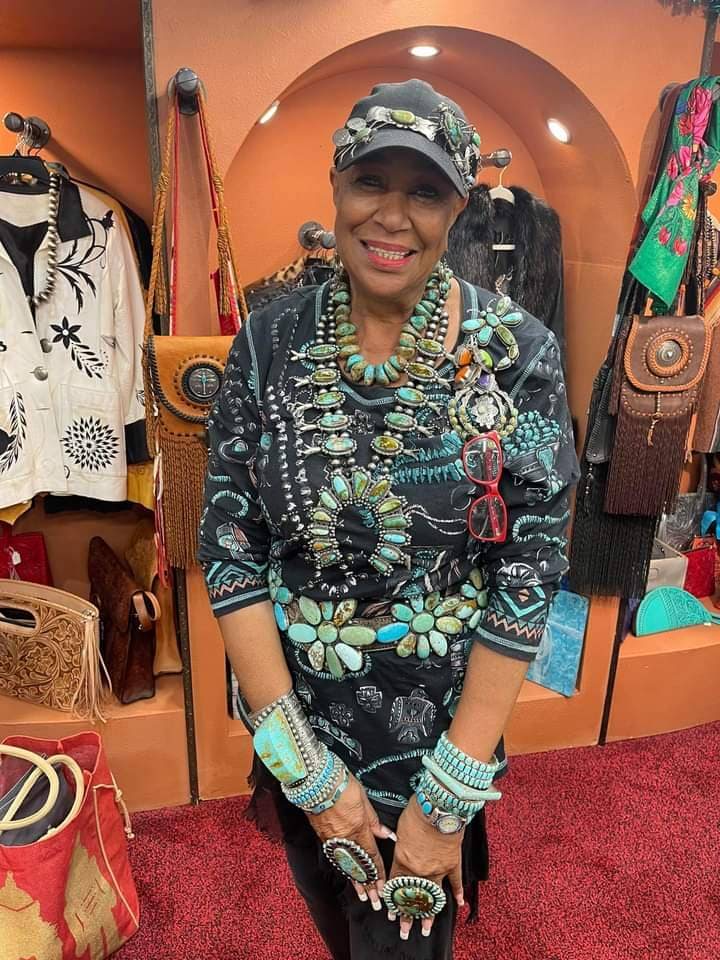 It’s always inspiring and humbling to be reminded that some of you incredible people have been along for the ride for so many years. While we’ve always stayed pretty true to ourselves, our style has definitely evolved over the decades (as all fashion does), and so we’re always interested to know a gal’s favorite pieces, past and present.

“As for my all-time DDR favorite, I would have to say The Scout Jackets,” Alice mused. “And the Turquoise World Poncho is my favorite from the current Jewelry Junket collection. However, I find all of the DDR designs to be very attractive and highly appealing.” 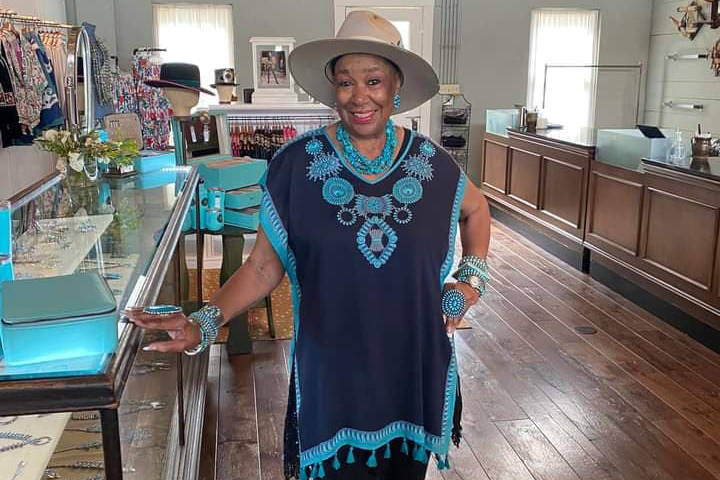 High praise coming from an absolute icon of style and individuality! *blushing*

“My mantra is I dress and accessorize with confidence, elegance and grace, and seeks no one's approval but my own!”

I love the idea of highlighting these amazing women! We met Alice last summer and was instantly drawn to her magnetic personality. She is a true beauty inside and out. Her “larger than life personality” is inspiring and parallels the brilliance of her turquoise collection. God bless Alice and DDR for sharing this beautiful story. An inspiration to us all.

Love Alice’s story. Nothing makes me feel better than wearing DoubleD which people always stop me and want to know where I got it. My sweet grandmother also introduced me to my first turquoise with a ring from El Paso. Know my collection is still growing. Life is Good and God is Good.

What a lady! I met Alice at the meetup last July. She is a true inspiration to me.❤️❤️❤️

I met Alice last year at the Yoakum MeetUp. Immediately I was impressed with her STUNNING STYLE layering turquoise like a exquisite portrait! However, getting to visit with her just totally made me an instant fan! She is sweet and genuine!!

I met Alice last year at the Yoakum MeetUp. Immediately I was impressed with her STUNNING STYLE layering turquoise like a exquisite portrait! However, getting to visit with her just totally made me an instant fan! She is sweet and genuine!!

I too was lucky enough to meet Miss Alice at the DDR meet-up last year, and lucky to meet Cheryl Luna too! (Among other wonderful Ladies). Miss Alice is certainly setting a high bar of class, and grace. Such an impressive role model for us all, and so friendly, and wonderful to talk to as well.

I met Alice at the 2021 at the annual wolf pack event . This was my first time at the DDR event . I admire her I call her the turquoise Queen.she a very wondering person .

I have admired her from afar❤️ I even had the opportunity to be in her wake at the Houston Rodeo. I love her unbridled style wearing what she wanted whenever she wanted with a flare of confidence that most can only hope to have one day. Bravo sweet lady I hope we meet in person one day here on earth, if not we will meet on those streets of gold❤️

I love seeing Alice, talking to Alice, reading about Alice! Loved learning even more about her! She’s definitely my heroine! ❤️❤️❤️

Beautiful, accurate and delightful feature about a beautiful, delightful and authentic lady. You will meet no other like Alice, and you will be blessed by encounters and friendship with her! She is a perfect portrait of so much we admire: grace, positivity, DDR, style, turquoise, classiness, tenacity, great humor and that inner light that comes from faith and Godly love. Well done, Alice! Well done, DDR!❤️❤️❤️❤️

I met Alice Fisher at an event in Santa Fe in 2019 and knew immediately she was a very special person. She is gorgeous, friendly, and has an extraordinary energy that surrounds her. Your article brought tears to my eyes. Thank you for highlighting such an incredible person.