If you’ve never been to Broken Bow, Oklahoma, we really can’t recommend it enough. It’s a beautiful piece of wilderness in the southeast corner of Oklahoma with an abundance of beautiful log cabins and lodges for rent. Broken Bow is home to Beavers Bend State Park, which has all sorts of attractions to offer, including Broken Bow Lake, a portion of Mountain Fork River, and the Ouachita Mountains. (And our personal “favorite”, an unofficial trail down to the river nicknamed ‘Cardiac Hill’ – and for good reason!)

Just a heads up, though, it’s not exactly easy to get to. We had to fly everyone into Dallas, and it’s a 3 hour drive from there. But, worth it. 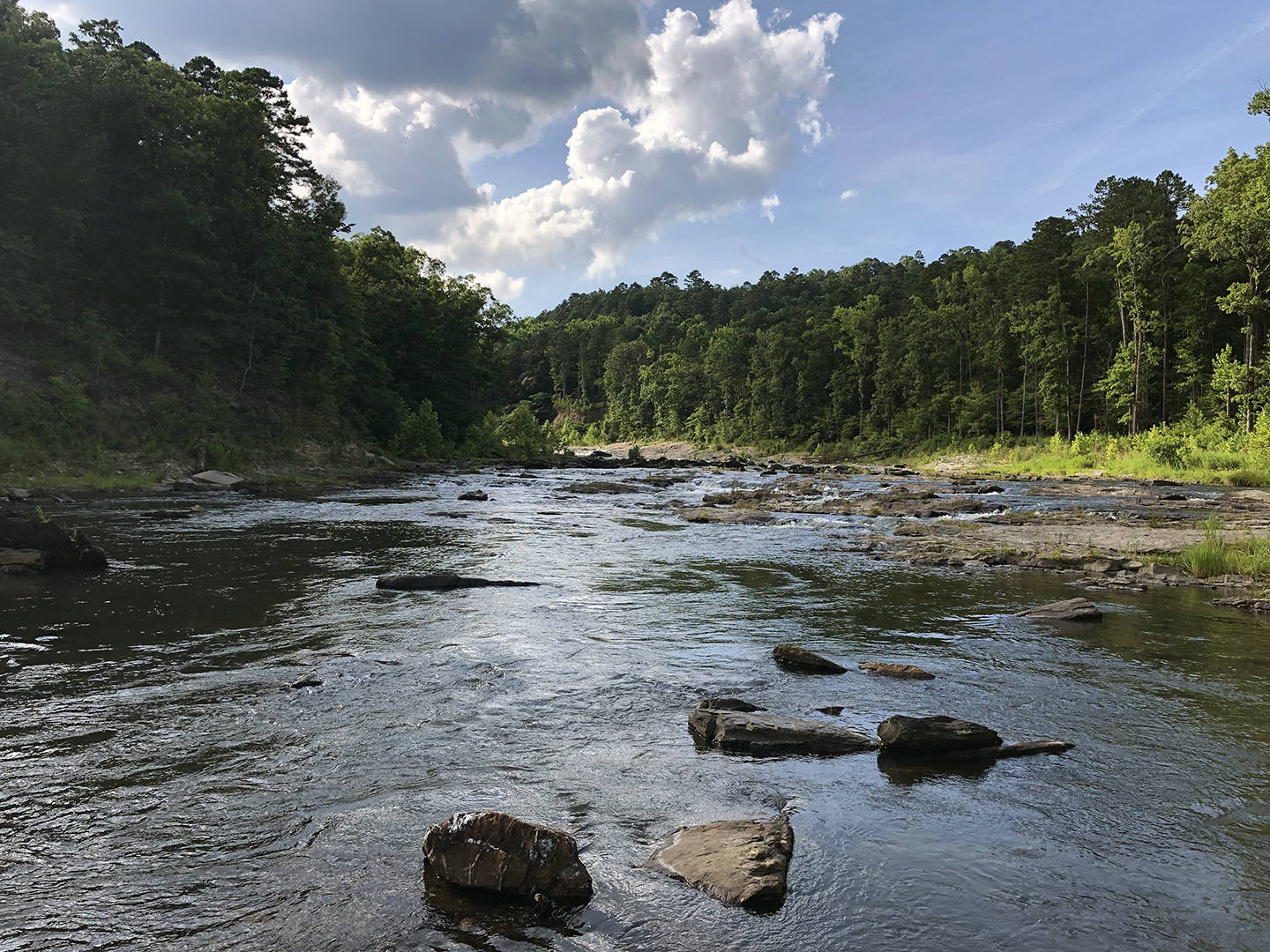 While we’re making recommendations, our fly fishing guides were top notch. Chris Schatte and Jeff Preddy with Beavers Bend Fly Fishing were knowledgeable, experienced, and above all – patient! They didn’t even complain when Kaylin accidentally hooked one of them right in the booty with her attempt to cast. Oh, and while killing time as we got models dressed and whatnot, Chris was just nonchalantly throwing a few casts and hooked a – no joke – 22”, 6 lb. rainbow trout! That’s a bragging rights catch for most fishermen, and he seemingly did it almost by accident. Casual. 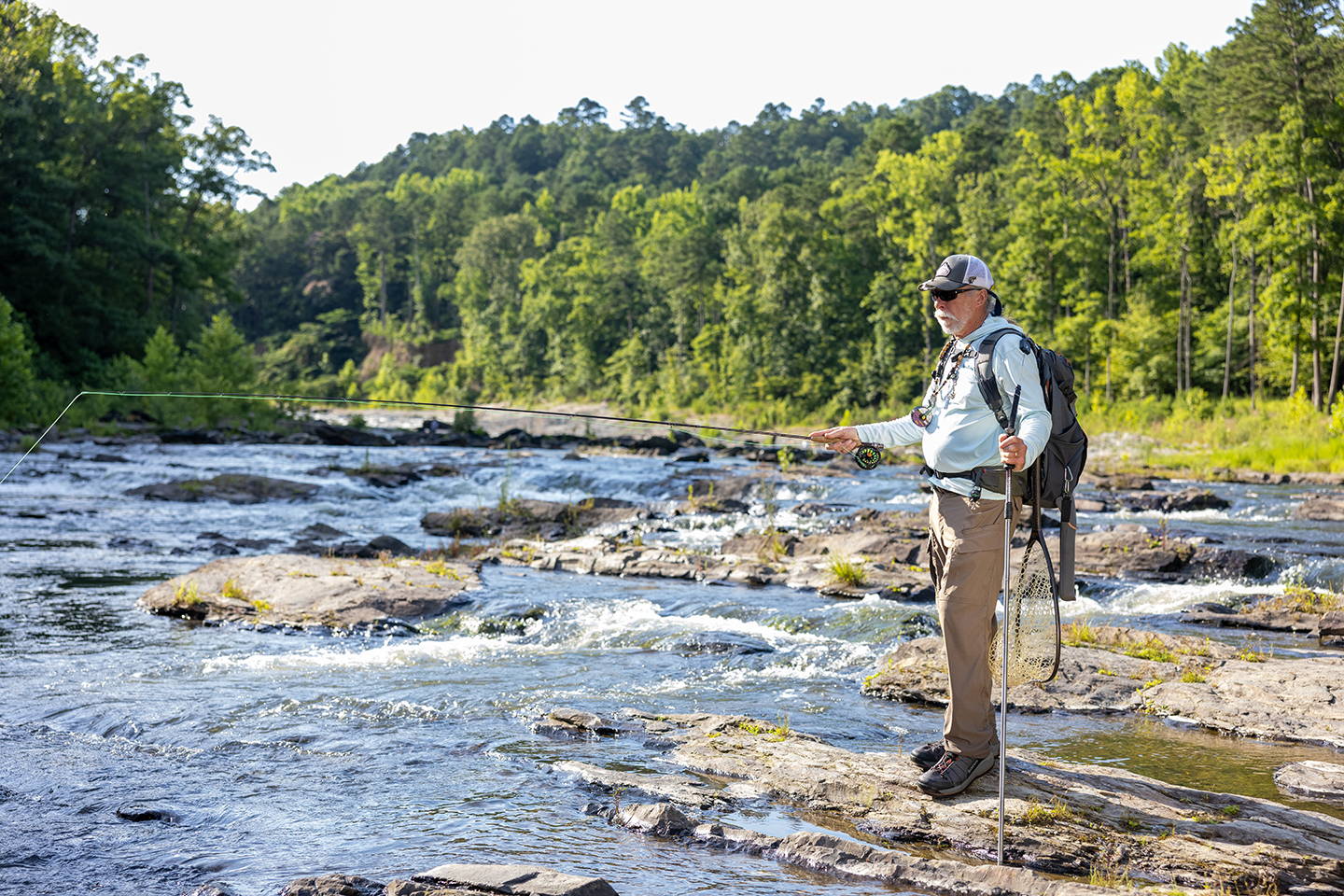 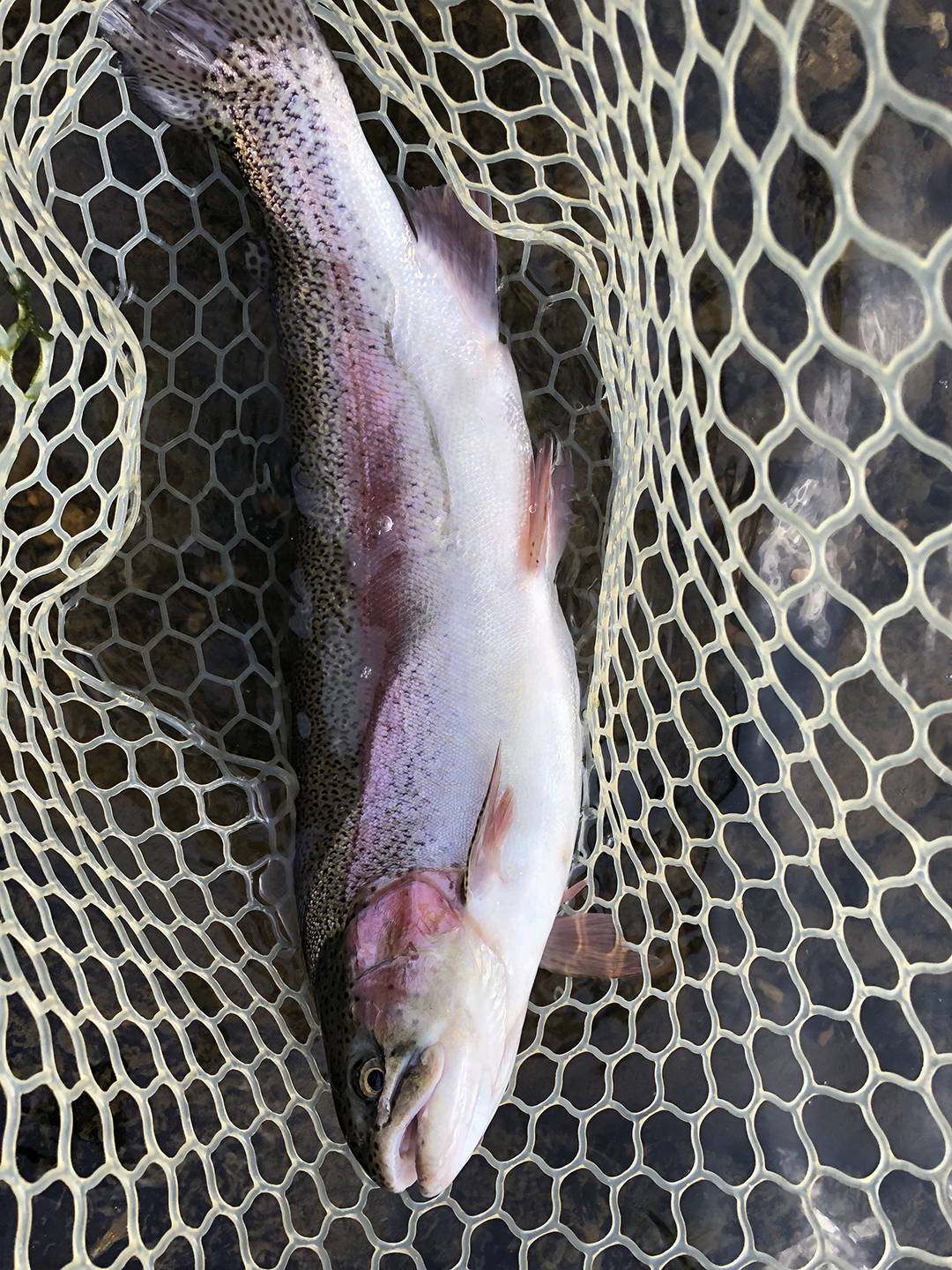 (Fun Fact: It was Jeff who gave us the idea to roll down the top of Lozzie’s waders in that iconic Roosevelt’s Ranger Jacket shot.)

Now, let’s talk for a second about the harsh realities of shooting in nature.

Y’all know by now that we shoot in opposite seasons, which means – you guessed it – we were shooting this fall collection of jackets and velvets in the middle of June in Oklahoma. And of course, the week we happened to be there, the temps were hovering dangerously close to triple digits. Y’all, you’ve never seen so much sweat. (Kudos to Lisa Martensen for keeping the girls looking on point, and not like they had just taken a water hose to the head.) 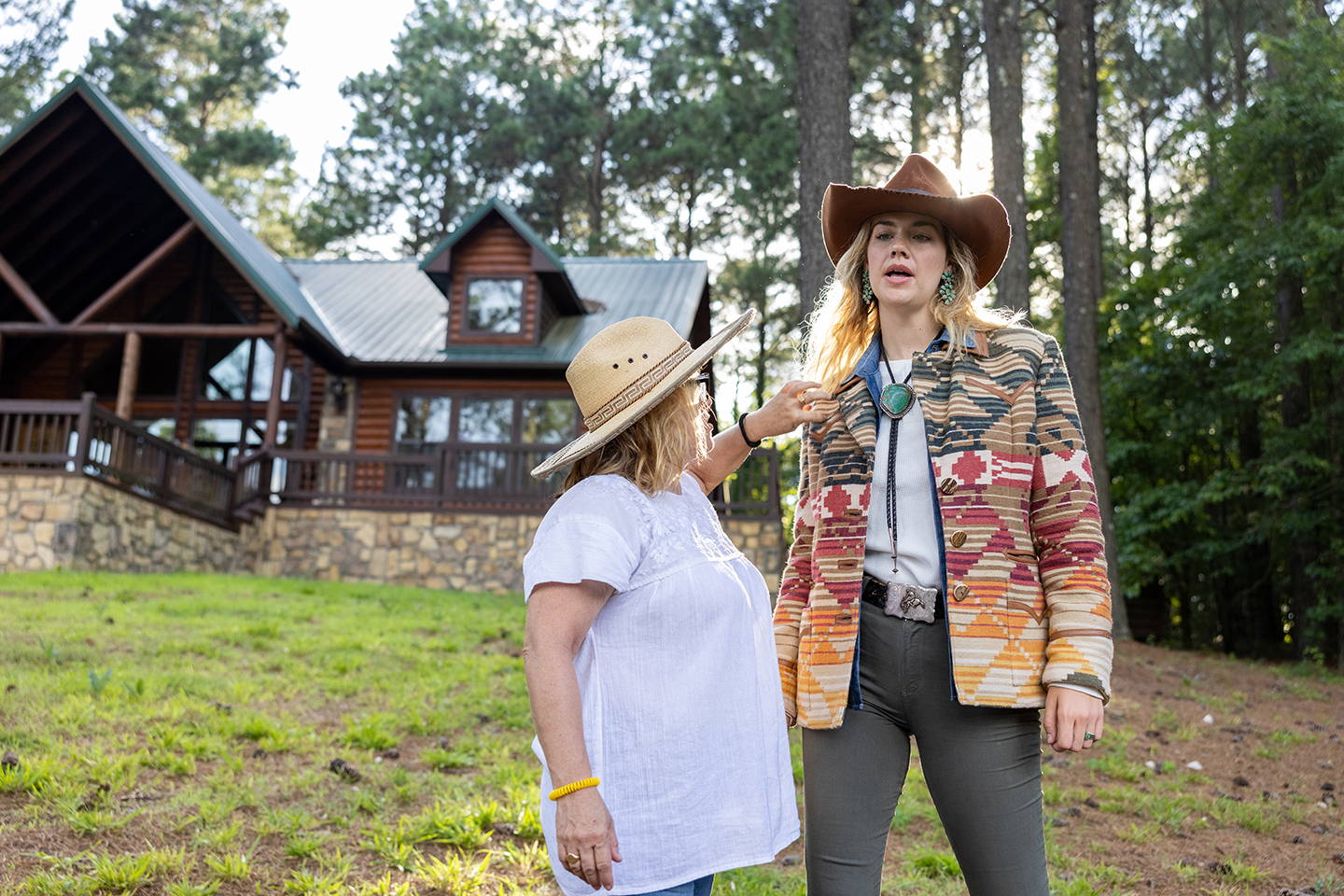 And then there were the critters. First of all, that river had some of the LOUDEST frogs we’ve ever heard. It was almost comical, because we never actually saw one, but they were clearly EVERYWHERE. But that was nothing compared to our absolute nemesis of the shoot: CHIGGERS. Y’all. They were relentless and they ate us alive. To the point we joked about producing a series of horror films: Chiggers, Chiggers 2: The Aftermath, Chiggers 3: Chiggers’ Revenge. It was bad. On the bright side, it did lead to a hilarious few days of, “Hey, who has the Preparation H?”

Speaking of comical, we had a pretty amusing (and perhaps a little frustrating) round of “bear rug Twister” when trying to shoot the porch scene. We arranged that little guy every which way. “No, that doesn’t work. Put the head where the left paw is and then tuck the back right leg under the bench.” “No, now head to right paw, left paw angled, back paws out of sight.” And so on and so forth until we got the giggles.

Oh, and y’all already know there were snacks on snacks on snacks. We did eat a lot of fresh fruit, hummus, and the like – we weren’t allbad – but there always seems to be that one “guilty pleasure” snack on every shoot. This time? Good ol’ fashioned bean dip and Fritos. Don’t judge. 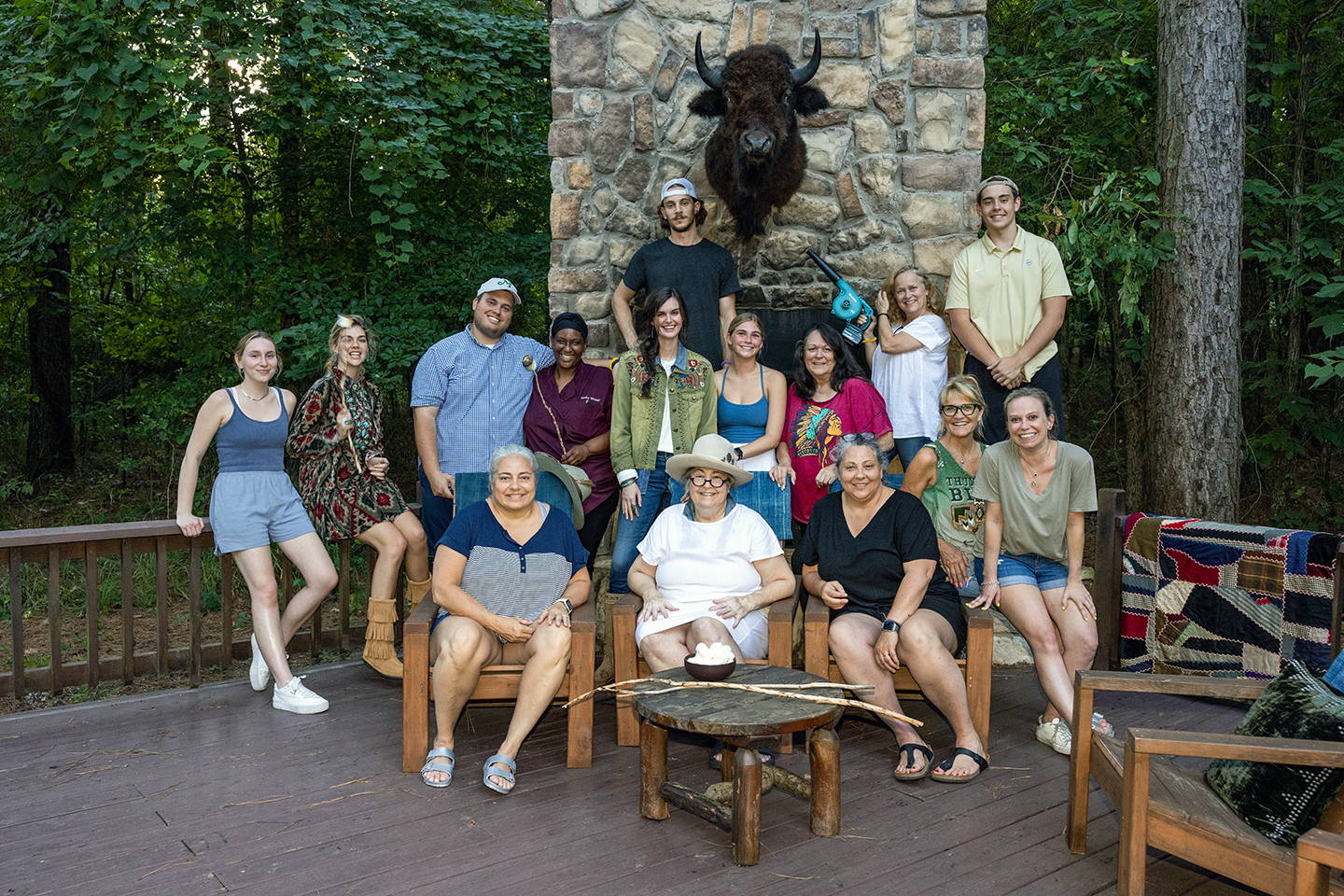 One other thing about shooting in nature: you don’t control the lighting. That means, models are out of hair and makeup and equipment is set up by first light – essentially dawn. After five consecutive days of that (we combined this shoot with Banff), you’re pretty worn out. The flipside of not controlling the light is that the sun is a bit too harsh to shoot from about 2:30-5ish, so you know what that means: afternoon naps. Followed by a friendly family debate about who, in fact, snores the loudest. (Hint: It’s always the one who adamantly declares they don’t snore at all.)

But we made it. And we have to give a shoutout to all the extra hands we had on deck: Sealy and Lynita (our favorite “married couple”); our summer intern Shelby Jordan; and last but not least, the youngest of the McMullen grandkids, Audrey’s son Harris, who now wants photo credits on Instagram for holding the reflector, and Hedy’s daughter Presley, who upon shoving the last prop into the Uhaul, wiped her brow and said, “How does Santa Claus do this?!” 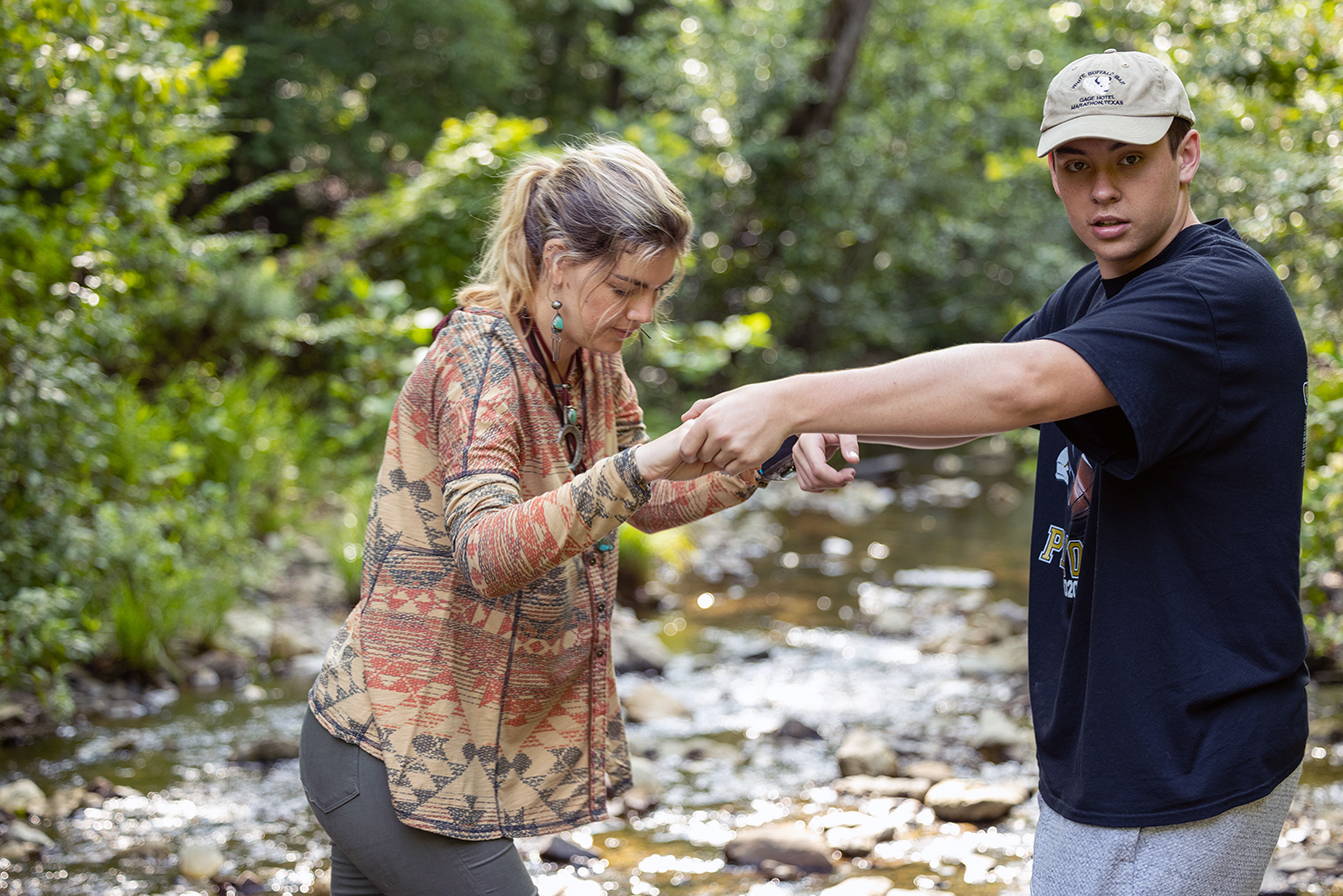 We had a lot of fun! Thank you!
Chris
Beavers Bend Fly Fishing Guide Service

That was just the best entertainment for me today. You all just keep plodding forward until the job is done. The photos are always beautiful and everyone then wants to buy everything!!!! Now, that’s the way it works. Love you all.

OMG! Now I know why I am such a fan! Only you and your group of professionals could ever endure what it took to make it all perfection! Blessings to each and everyone of you and thank you for allowing me to witness your spirit!