Whether you grew up watching him, or his show completely predated your existence, when you hear the name Porter Wagoner, you can picture him. His blonde pompadour. His even blonder sidekick, Dolly. And man oh man, his colorful blinged-out suits.

The Porter Wagoner Show ran the entirety of the 1960s and 70s, during an era when fashion was getting a lot more colorful and a lot more funky. Silhouettes had flare and skirts had swing, and the world of Western wear was full of twang.

It also coincided with the emergence of Nudie Cohn onto the mainstream scene. The illustrious tailor who got his start making undergarments for showgirls, had gotten a foothold in the western world via the musician Tex Williams, and evolved into creating garments for some of the era’s biggest stars, like Elvis Presley, Johnny Cash, and Elton John. 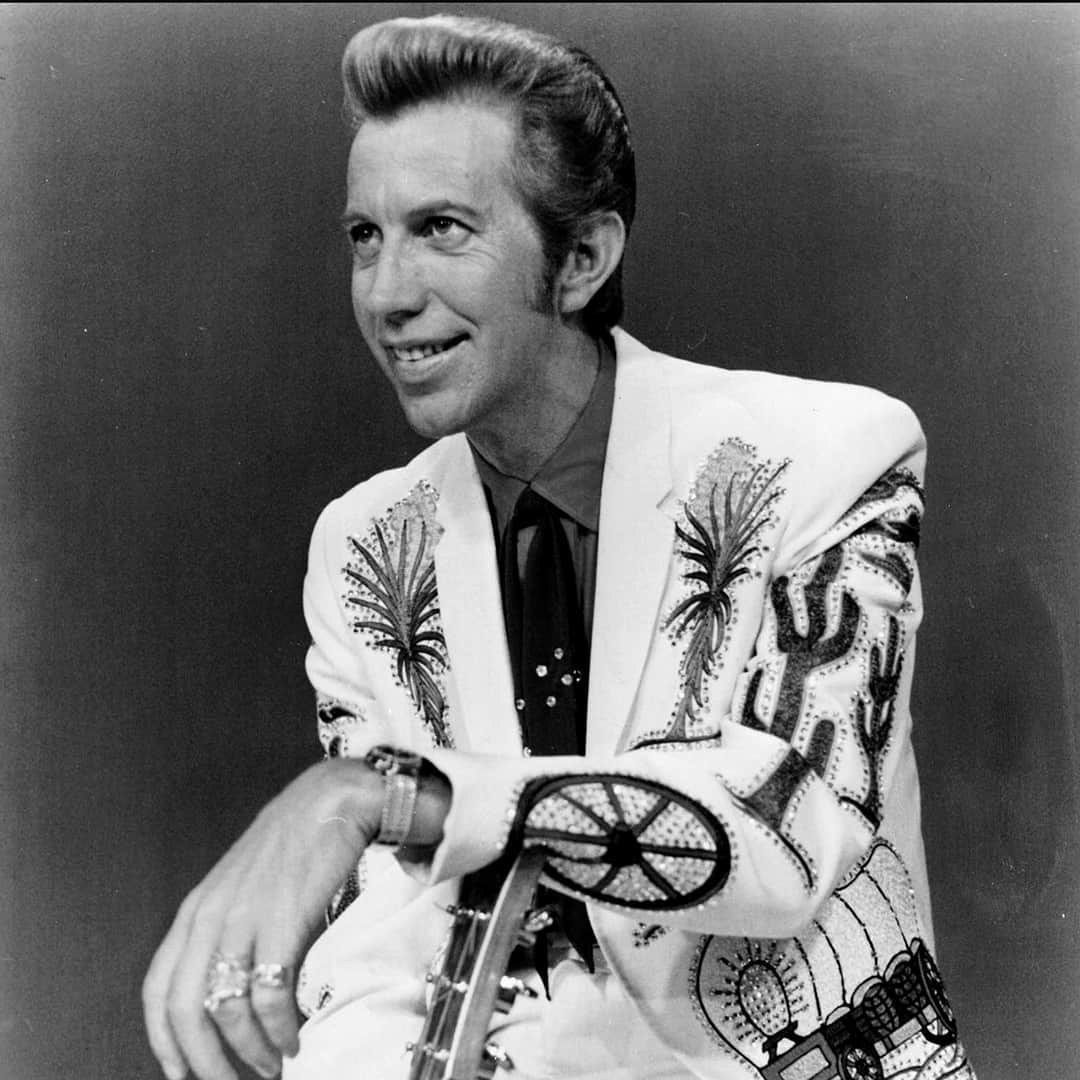 Porter Wagoner was one of them. At the time, The Porter Wagoner Show was averaging about three million viewers a week. So, Nudie made Porter a suit, free of charge, knowing that if he wore it on air, it would be better advertising than money could buy. This was 1962, and he wasn’t wrong.

Porter’s style almost became synonymous with Nudie Cohn, and the two rose to stardom in tandem. Nothing was too over-the-top -- there were bright colors and big embroidery and all the beading and rhinestones one suit could handle.

We had to bring that to the Bakersfield collection. You’ll see influences of Porter in vests, in jackets, and even some sassy Nudie-inspired suits. If the Bakersfield Sound had a look, this is it. 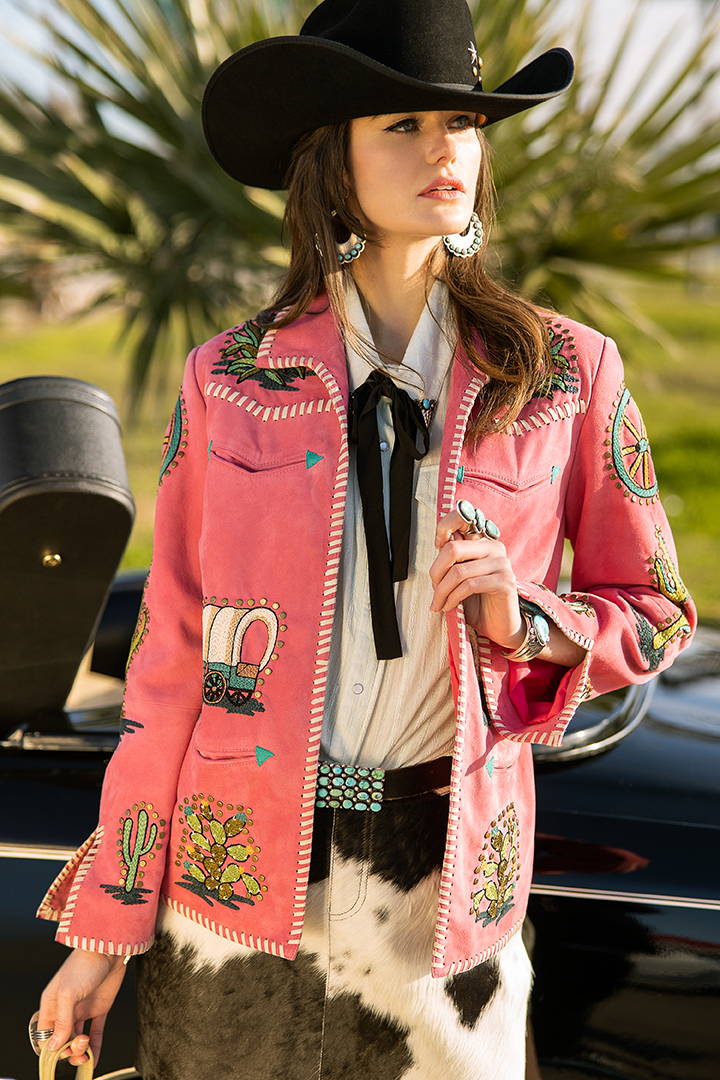 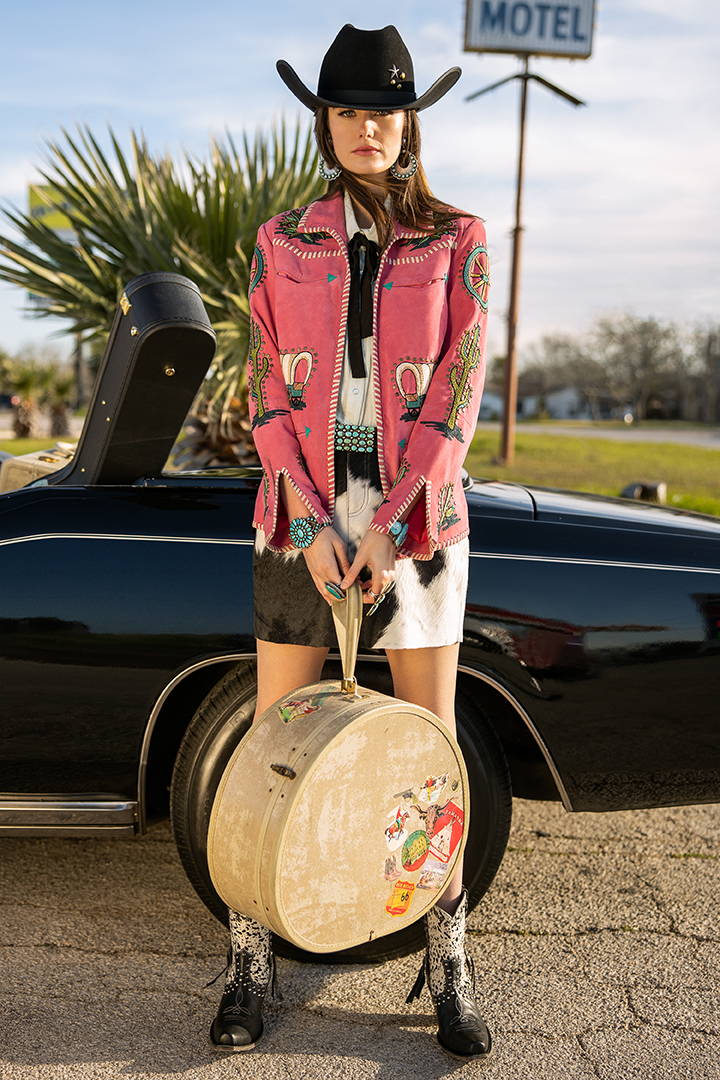 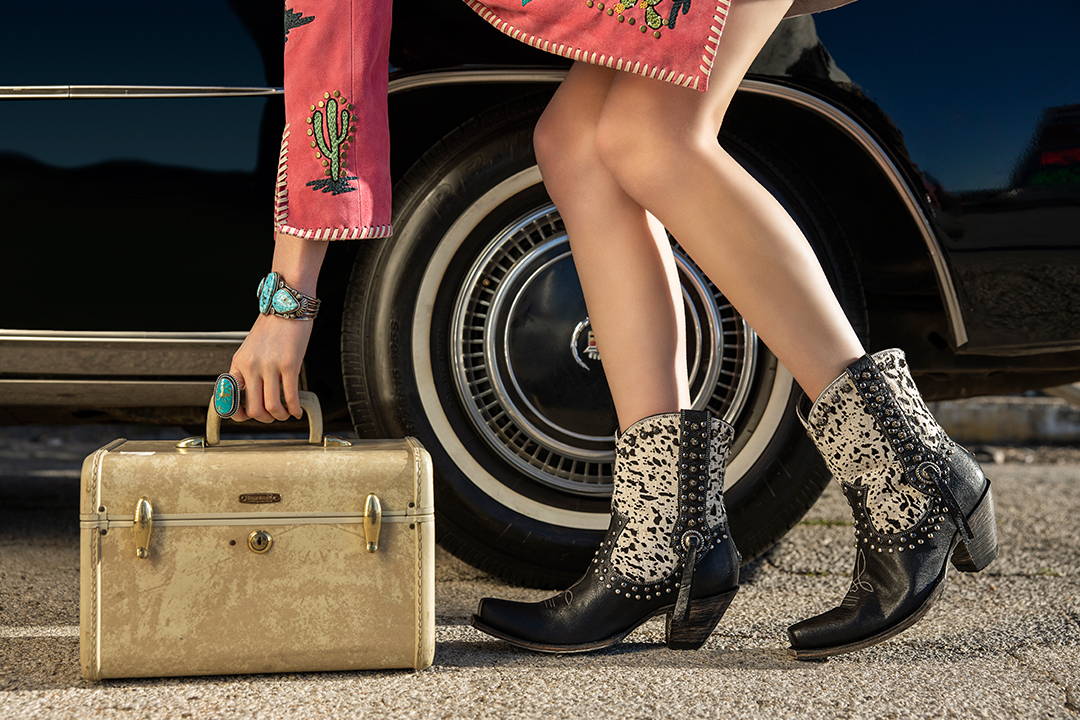 And not only was Porter Wagoner an integral character of the Bakersfield era, he was also a memorable character in the childhoods of the McMullen sisters. Ya know, it’s crazy what your brain saves space for. For instance, Cheryl can never, ever find her Chapstick, but she has a word-for-word recollection of an in-show promotion from 50 years ago.

“I remember just sitting over at my grandparents’ house, they had the plastic-covered sofa, you know, and we would watch Hee Haw or we would watch Buck Owens or we would watch Porter Wagoner,” Cheryl said. “Remember theadvertisements for Breeze Detergent? ‘You can only get it in boxes of Breeze!’ There were these towels -- you could get these floral printed towels in boxes of Breeze. I would go home and tell Mama, ‘Mama, you gotta buy Breeze so we can get a collection of those towels!’ And Porter and Dolly would pitch the Breeze. I can still hear it!”

Porter influenced her household purchases then, and he’s influencing her design aesthetic now. The Head Over Wheels Jacket is one of Cheryl’s personal favorites in the Bakersfield collection and it’s an obvious homage to his unique style. 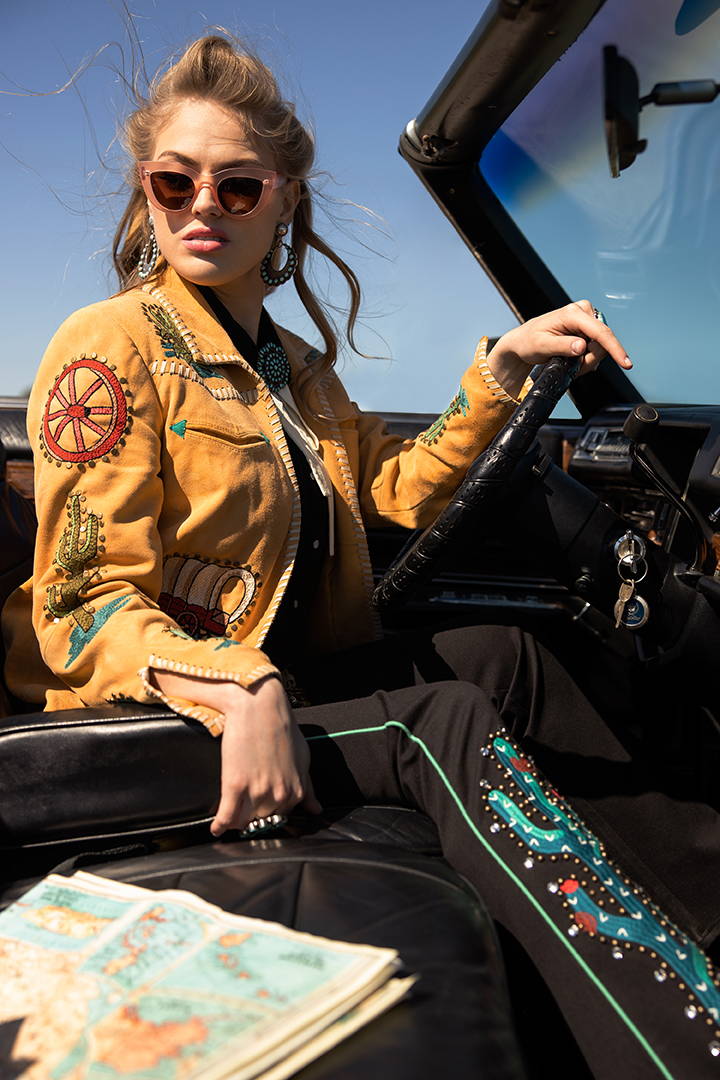 “This jacket was definitely styled after Porter Wagoner,” she explained. “You know, Nudie did wagon wheels on a lot of Porter’s suits, that was kind of his signature, so we pulled those in with some covered wagons and cactuses and put them on these fun colors. It’s one of my favorite silhouettes, because it’s so easy to wear and so forgiving. It’s the same one we did last year with Down Mexico Way. So if you have that jacket and you like that fit, that’s what this is, and it just has all this great Nudie-inspired embroidery and stitching.” 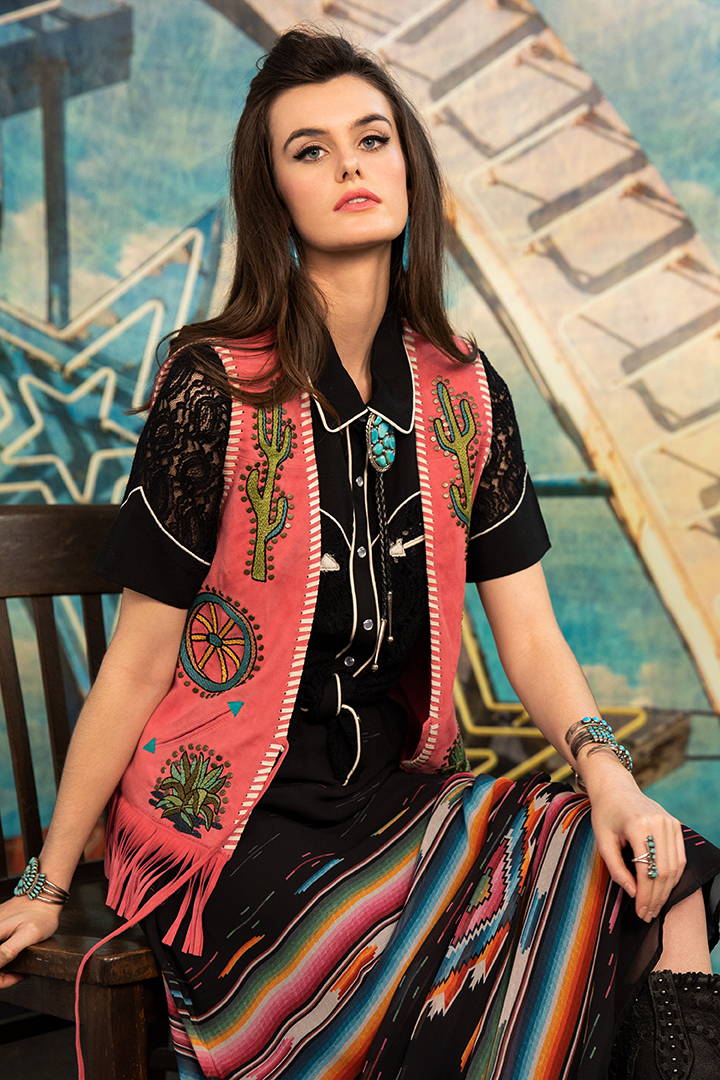 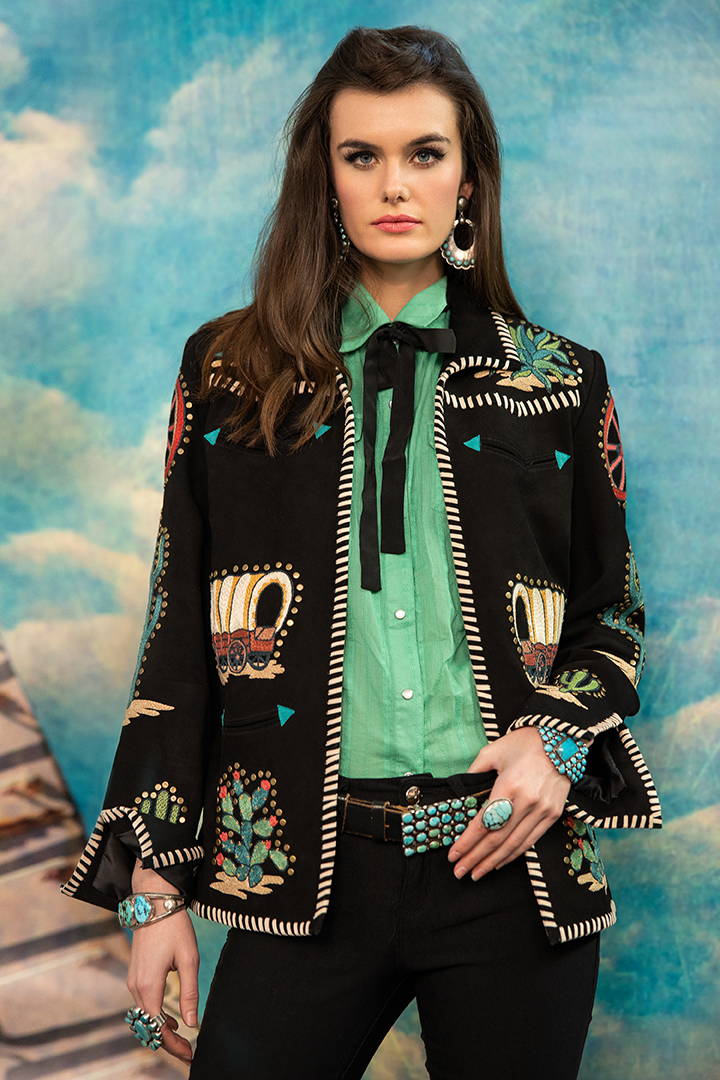 This is absolutely FABULOUS!!! I love all the details, and remember it so well from the shows although it wasnt as widely shown here in South Afica. Stunning collection!!!