Behind the Scenes in Nashville: The Second Half

Back in April, we took y’all behind the scenes of our first 18 or so hours in Nashville, with the promise of more shenanigans to come. Well, the time has come. Buckle up and ride along for the next wild 12 hours in/around Music City.

When we left off, we had just wrapped up our shoot at the historic Ryman Auditorium with the wonderfully talented Jenee Fleenor and her sweet mom, Helen. Because Double D Ranch photoshoots are perpetually running behind schedule, it was an “eat lunch in the car” kind of scramble en route to the next location, Tanya Tucker’s ranch, which, it turns out, isn’t exactly on the map. Or at least not as far as Siri knows. After about half an hour of winding through the gorgeous tree-lined roads of rural Tennessee, we could tell we should be getting close. The houses were getting farther and farther apart, the roads were getting more and more gravely, and the street signs became less and less frequent. It definitely started to have that, “if you’re from around here, you know it like the back of your hand, but if you’re not, good luck” kind of vibe. We were definitely in the latter category. We came to a fork in the road, and our two-car convoy (Mitchell, Cheryl, and Kristen leading in the suburban, Halley and her unpaid intern, aka her mom, trailing behind) had to make a choice. It was the wrong one. We made a couple of u-turns, we pulled into a couple of the wrong drives, and we tried to do some deductive reasoning by speculating on whether Tanya Tucker was a “gate or no gate” gal. Eventually, Mitchell pulled to the side of the road and rolled down the window, the universally recognized symbol for, “we’re lost”. The decision was made to head back and try the other prong of the fork, which led us to our destination. Welcome to photoshoots, where there is never NOT a hiccup.

Ok, so we had made it to where we were supposed to be. Guess who didn’t? The guy who owned the vintage convertible we had planned to use in the shoot. Turns out, not everyone runs on Double D time, and he was none too pleased about the delay. Mitchell tried to reason with him that what did it matter since we were paying him, and let me tell you, that elicited a hilarious overreaction from Mr. Muscle Car! Now, y’all all know him as our sweet little Mitchie – which he is – but don’t be mistaken, Mitchell will stand his ground in a terse dialogue, especially when he’s right. Fortunately, this guy’s reaction was so incongruous to the situation that we couldn’t even take him seriously, and when he went so far as to tell Mitchell, “you’re a sh*tty person”, we actually laughed out loud. Let me tell ya, angry people do not like making people laugh. Needless to say – there was no car.

Speaking of comically bad attitudes, Car Guy wasn’t the only one we encountered that day. While we were unloading the clothing racks and organizing the jewelry, we were startled by a loud, unexpected neigh. Inside the barn, there was a horse tied up outside one of the stable stalls, and she was making it known she wasn’t thrilled about it – periodically neighing and stomping and snorting. As if on cue, one of the trainers looked to us and said, “She’s in timeout. She has a bad attitude today. Her owners have been out of town for a little while, and she gets salty when she doesn’t get enough attention.” Well, she ought to fit right in with our crew! 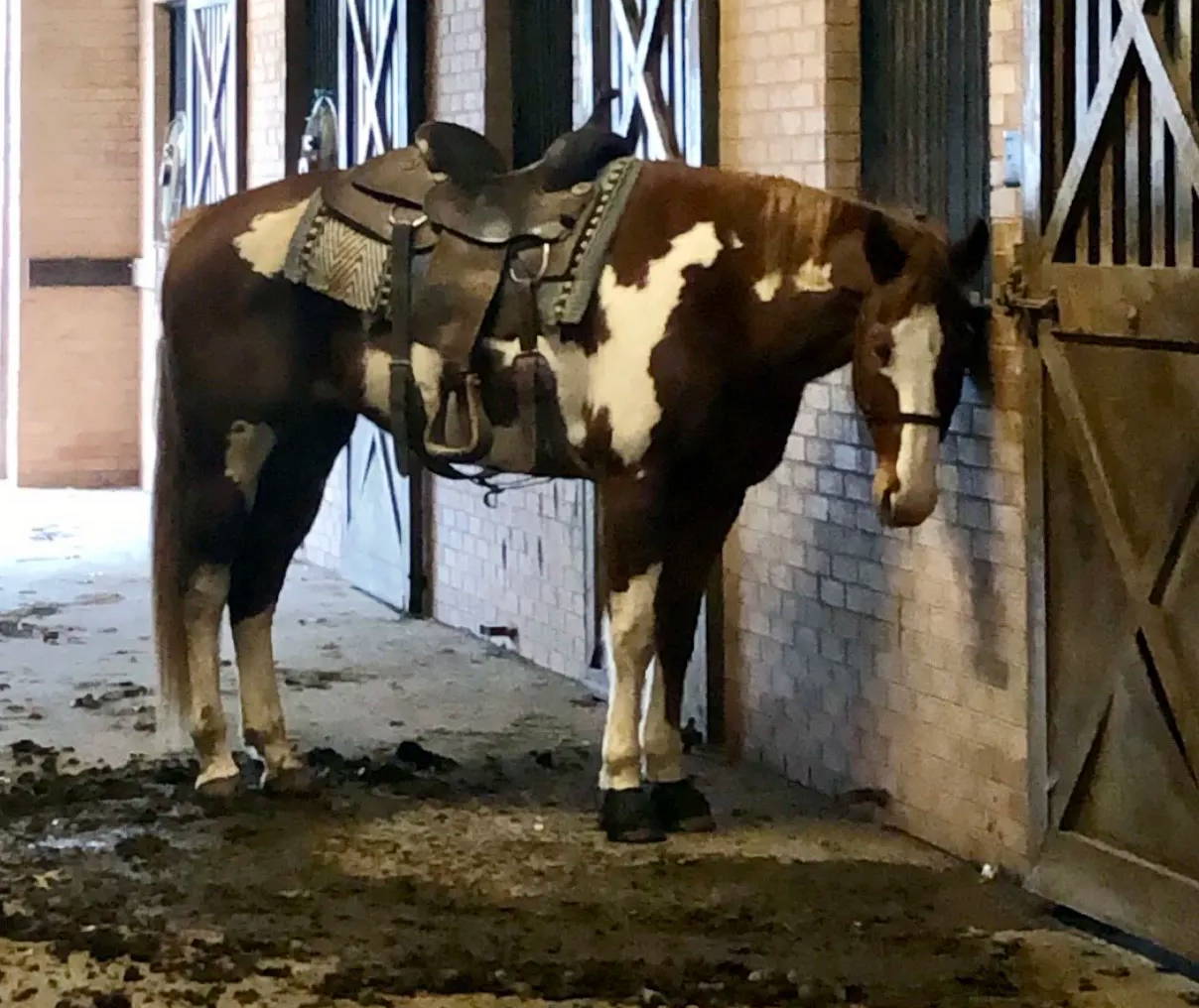 While we were prepping outfits and accessories, we all had a little pre-shoot pow wow. Basically, we ran through the order of the shoot, implored everybody to play it cool and not fan-girl too hard, and then addressed how little time we had left before sundown and how it’s critical we stay on task. “Cheryl, you’re crystal clear that you’re not supposed to talk Grammy’s AT ALL until after the shoot, yes? You know if you even bring it up, y’all will start talking about her outfits and then end up looking over sketches, and we’ll get nothing shot.” “No, no, Mitchie… I got it. I know we’re on a time crunch, I won’t bring it up.” (I’m sure you can see where this is going.) Tanya and her team rolled up, and – kid you not – the second sentence out of Cheryl’s mouth was, “I’m not supposed to bring this up, but…” When are we going to learn that the best way to guarantee Cheryl will talk about something is to tell her she can’t talk about it?! 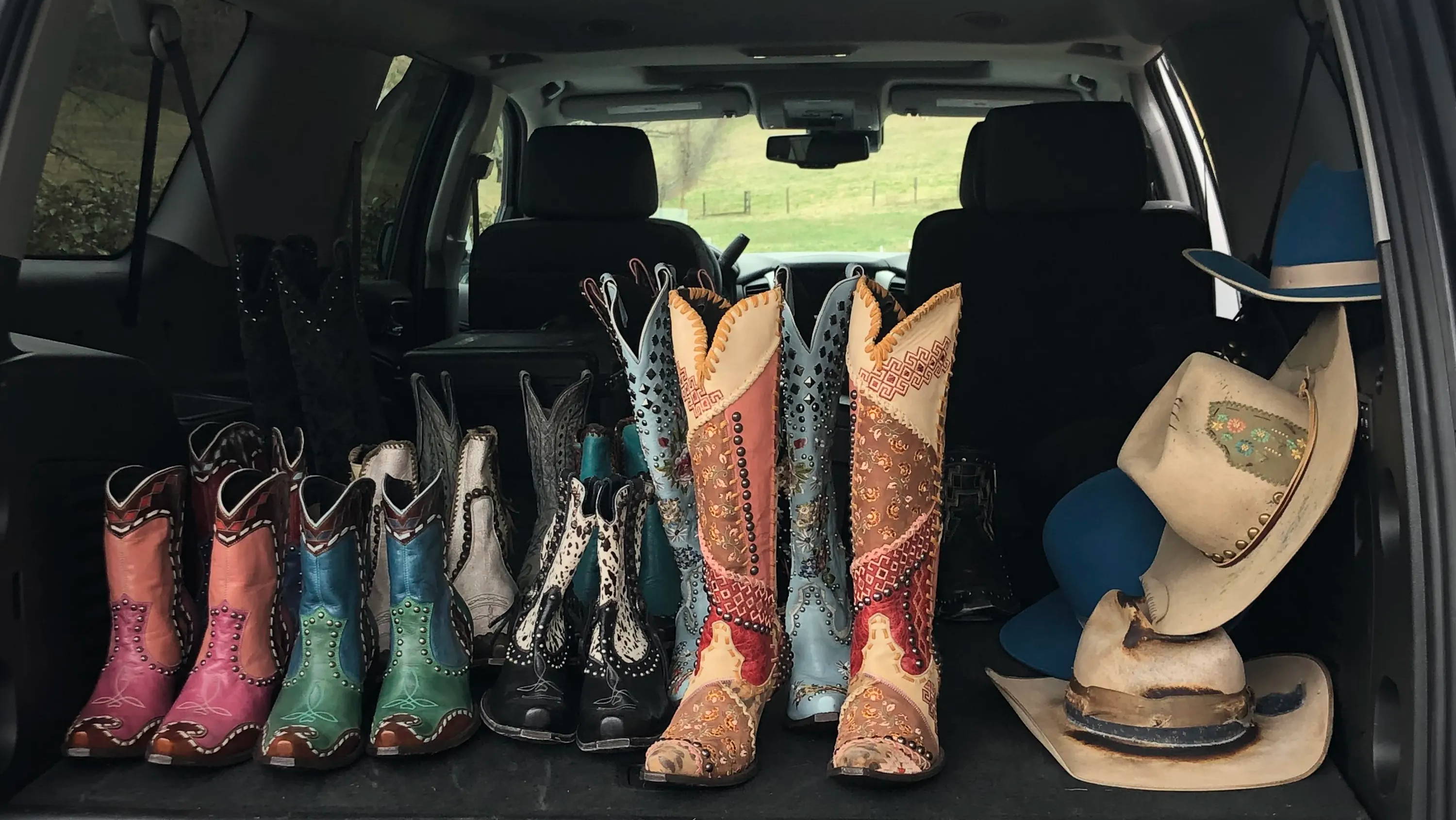 One thing we’ve learned about Ms. Tucker is that wherever you find her, you’re sure to find her beloved bulldog, Stella Quaid, not more than a stone’s throw away. Even in front of the camera. It’s no secret that we’re pet people, and Stella’s cute mug and her little waddle are pretty hard to say no to, so while we did have Tanya’s son Grayson lure her out of the frame for a few full-body shots, for the most part, we just let her do her thing and hang out with her mama. To be honest, she kind of steals the show in a few shots – you can’t NOT love her. 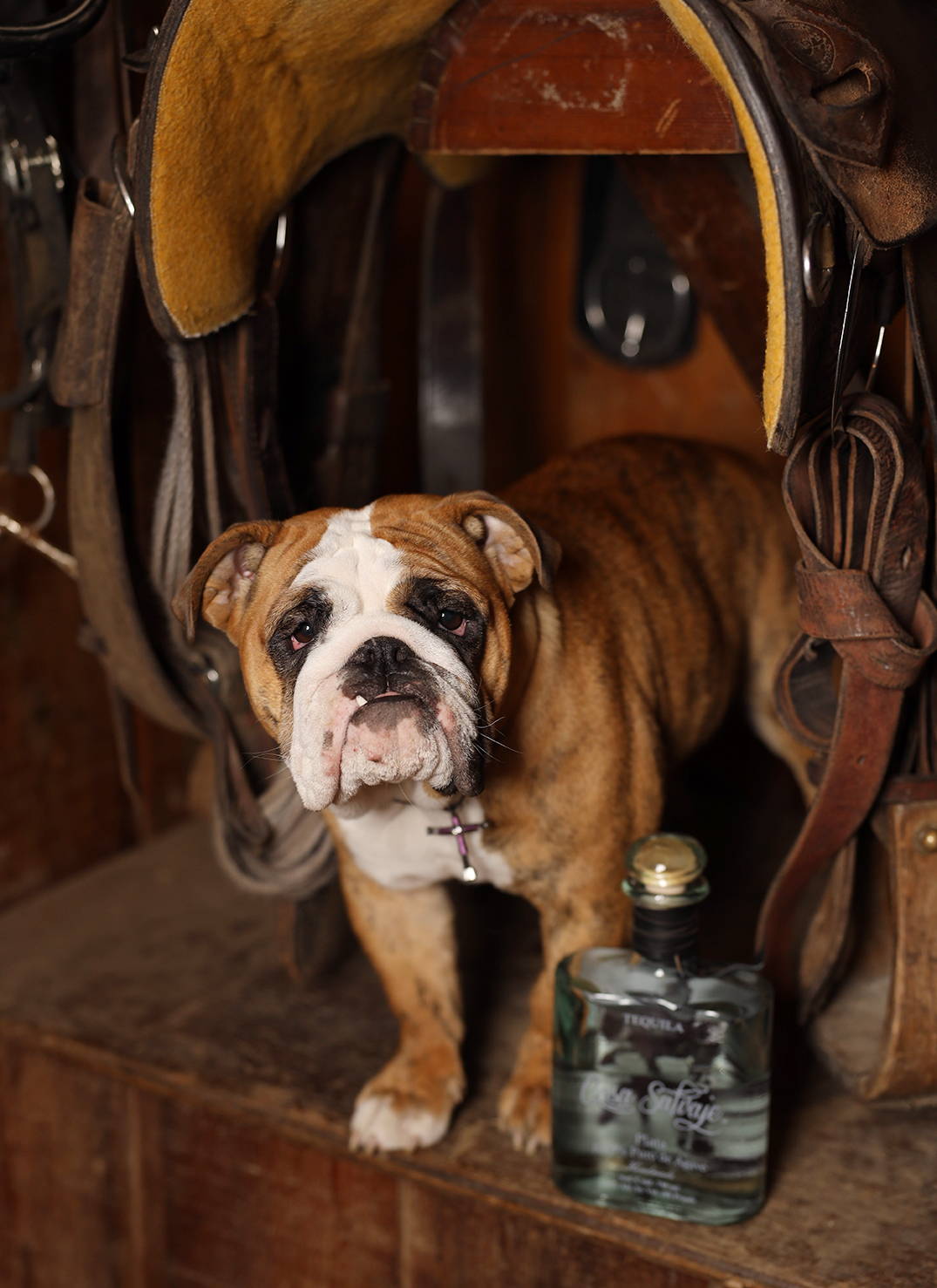 While we’re on the topic of show-stealing animals, can we just take a second to give a shoutout to Marley the Mini Horse? ‘Cause holy adorable. 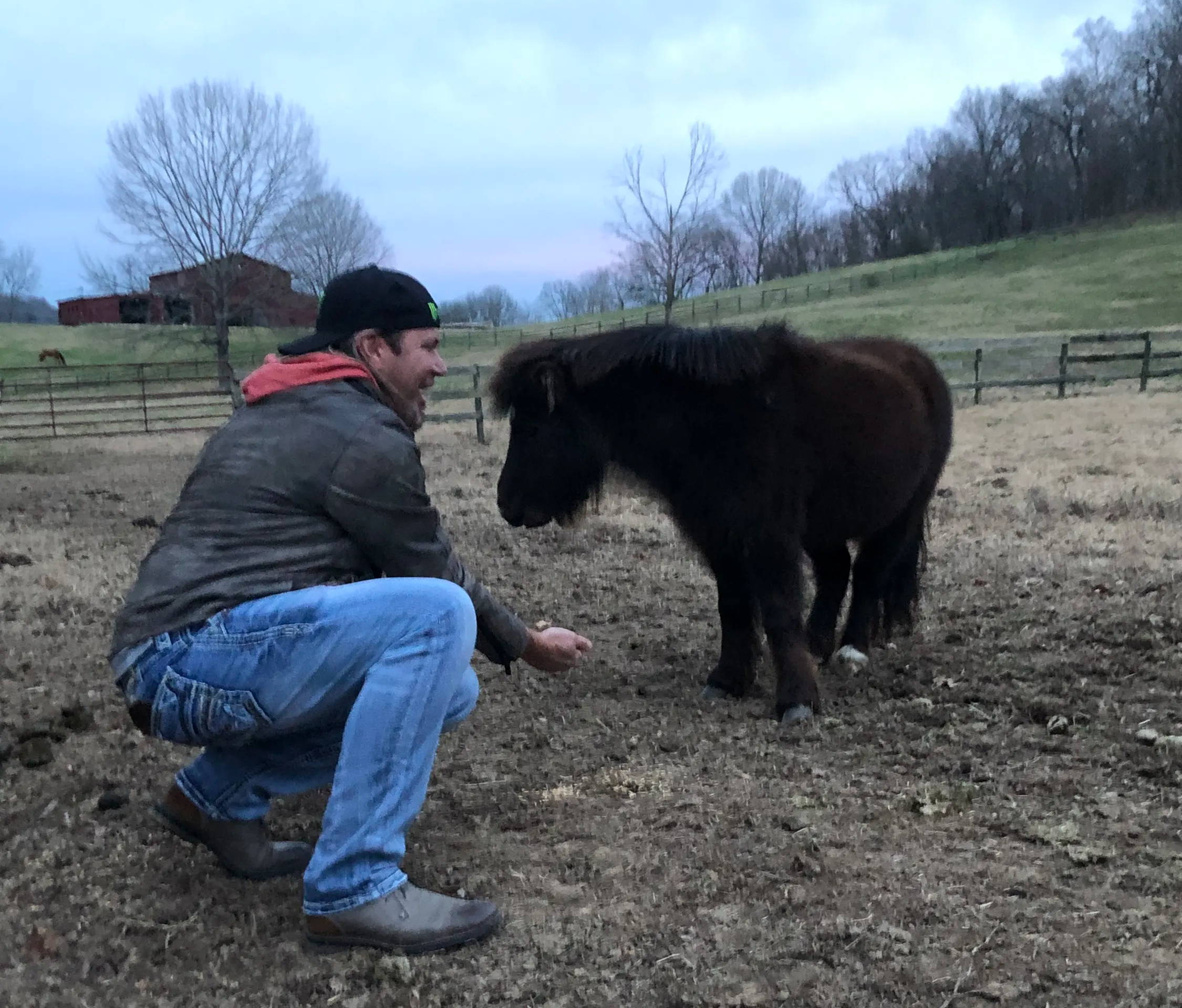 It may sound like a ton had happened already – and it had – but keep in mind that we got there after lunch and this was all before sundown, which at that time of the year, was like, 4:30 p.m. We couldn’t shoot outdoors anymore, so we snapped a few great photos in the tack room, and were ready to wrap. Ms. Tucker had another idea. Little did we know, we still had a lot of Nashville night ahead of us.

Let me relay this convo in the simplest format possible…
TT: We need to get photos of this collection down on Broadway.
Cheryl: Oh, wouldn’t that be awesome?! We may just have to set up another trip and come do that!
TT: No, let’s go!
Cheryl: Right now?!
TT: Yeah! We’ll go to Ernest Tubbs’, it’ll be great! C’mon, we’ll take the bus.
Cheryl: Take the bus to Broadway? Where on earth are you going to park it?
TT: Right out front.

And sure enough, not more than half an hour later, barricades were being moved and that big ol’ bus was parked right out front.

Bear in mind, this was in January, when people were still partying in bars and hanging out in masses, so you can imagine the curious crowd that started to gather at the sight of a tour bus on Broadway, abuzz with whispers of “Who’s in there?” and “Do you know whose bus that is?” And when Ms. Tucker emerged a little while later, she was met with enthusiastic cheers from fans that spanned generations. It was pretty cool to witness. 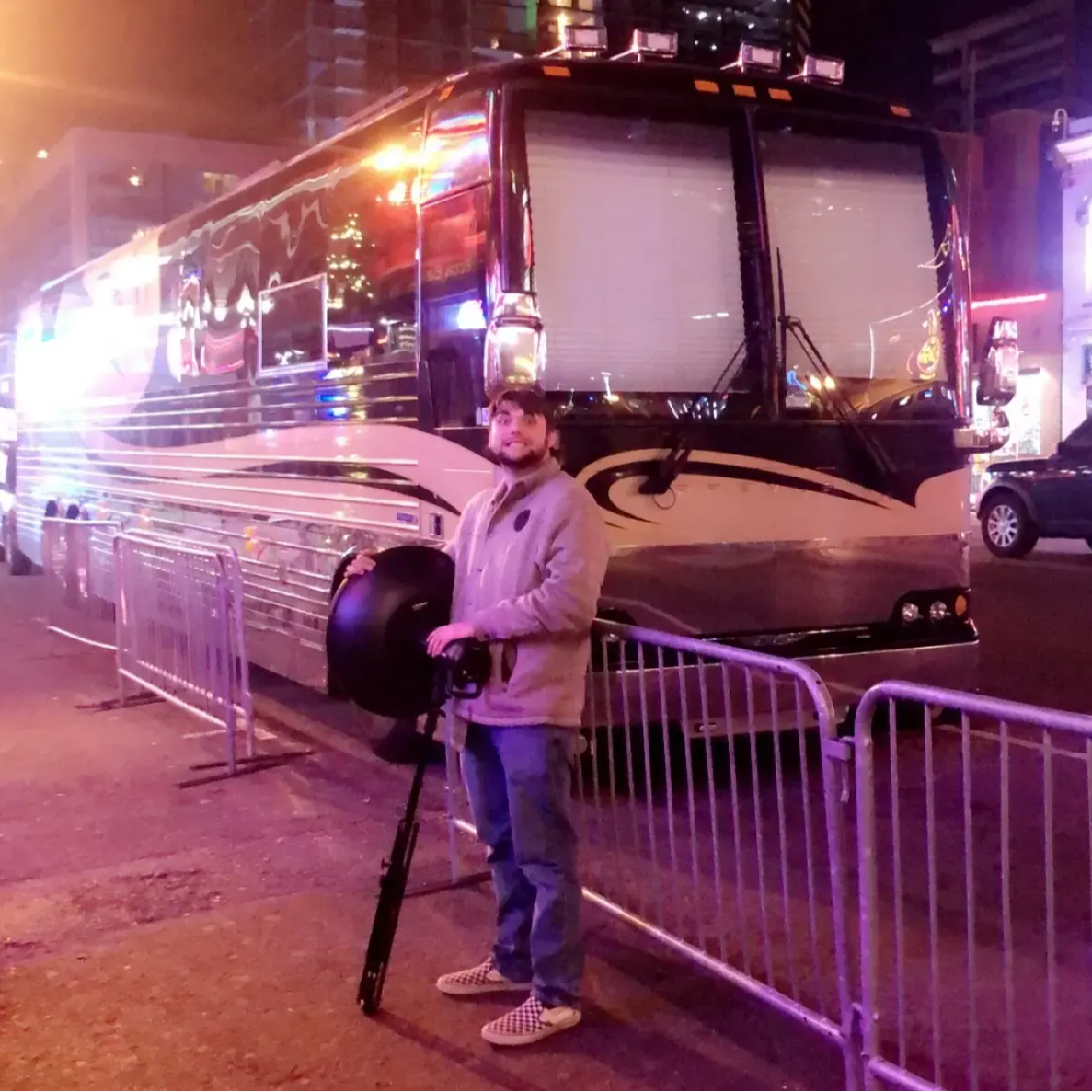 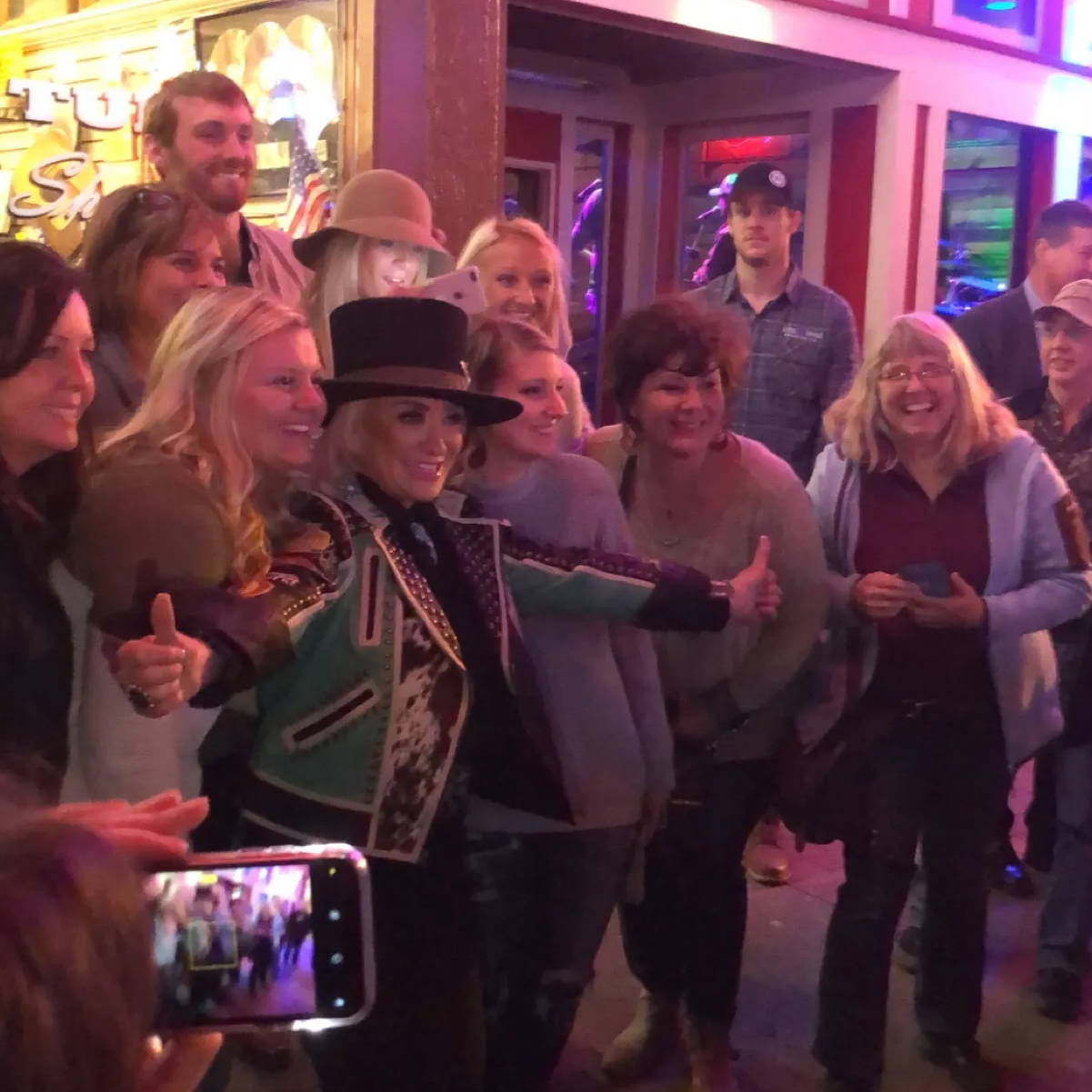 We took pictures up and down Broadway, inside and outside of Ernest Tubbs’ Record Shop, and even in the middle of the street. (Don’t worry, only in the crosswalk, and only when the little man was lit.) As you would expect, Double T was gracious to her fans – she signed a few autographs, snapped a few selfies, and responded genuinely when they declared their longtime love for her music. And for the most part, the fans were gracious in return. They kept a respectful distance, asked permission before approaching her, and stayed out of the frame when we were shooting. Well, except for one girl. During one of our trips across the crosswalk, this seemingly oblivious college-aged girl and her friend completely disregarded the giant light and flashing camera and walked right in between Mitchell and Tanya. Initially, we were in appalled disbelief that someone could be so self-absorbed that they were that unaware of their surroundings. But we soon learned we were mistaken. She was clearly very much aware of what was going on, because halfway into crossing the street, SHE LIFTED HER TOP. That’s right – we got flashed right in the middle of Downtown Nashville. We’ll spare you the visual aids. 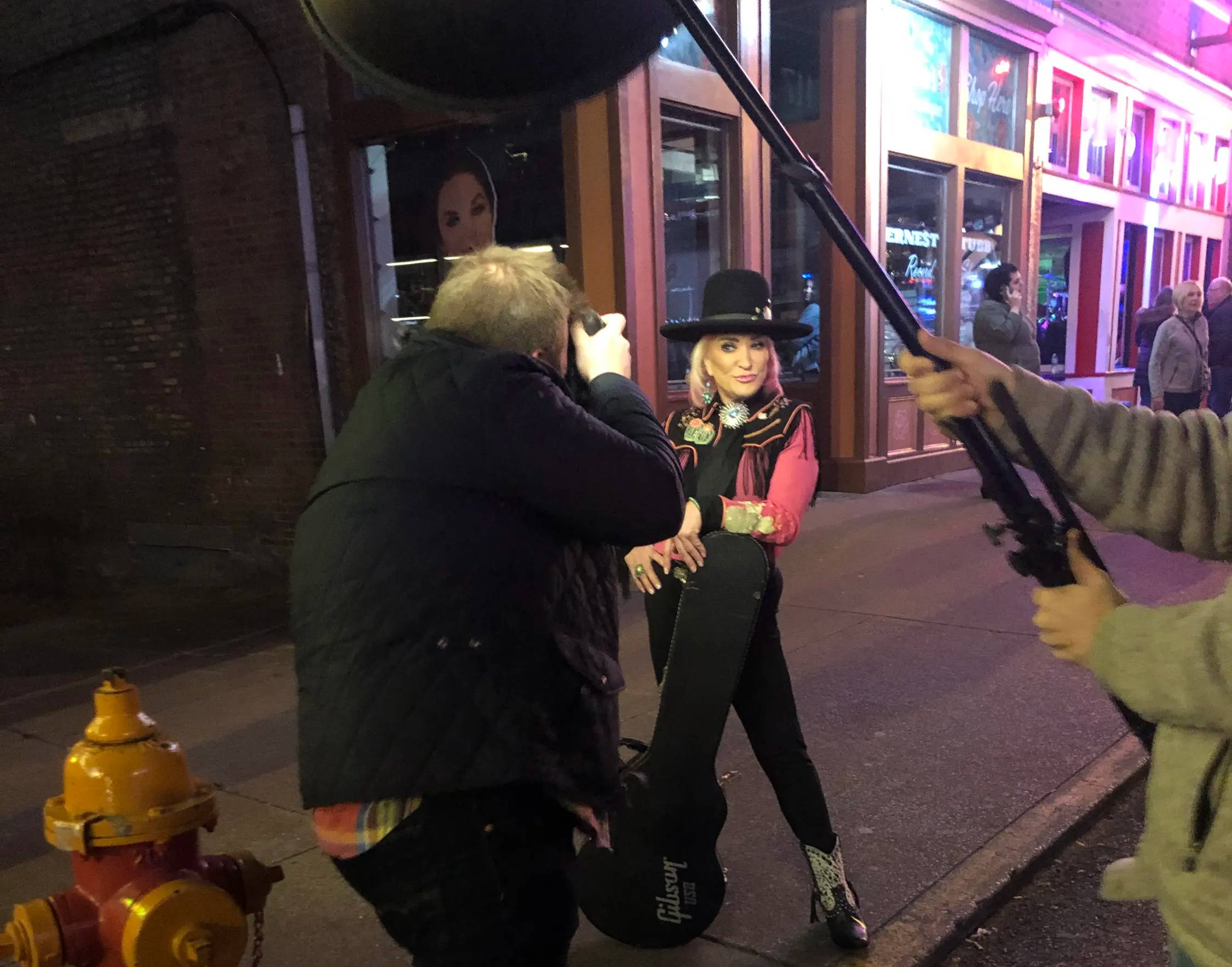 We called it quits around 9:30 and caravanned over to one of Tanya’s favorite restaurants for some much-needed cocktails, delicious food, and a whole lot of laughs. Let me tell ya, Tanya Tucker can tell one hell of a story, and man, does she have some to tell! (Sorry, those aren’t for public consumption, but she had some great one-liners that we’ll never forget.) However, perhaps one of the most memorable things that was said around that dinner table came from Tanya’s husband-and-wife management team, Jerilyn Sawyer and James Garner, in response to being asked what it’s like to manage Tanya Tucker. Jerilyn started by saying, “Oh, I don’t thinkanyone manages Tanya. We just put her in the right direction. She does what she wants, and we support her.” James followed up with, “We believe in her. I’ve never believed in someone so much before.” It was off the cuff, yet so profound, and well, it’s pretty dead on.

After passing around a decadent dessert, we gave our hugs and said our goodbyes, and declared “the end” to a day that felt like ithad to have been four days in one, but was unforgettable from start to finish.

she looks so fun I would love to meet her,we come to Nashville at least once a year and I think I have every jacket you have made..you are my favorite