Angela is one of the most talented, most sought-after restorers of beadwork (and artifacts and war-era memorabilia, among other things) in the entire country.

Her work is beautiful, and intricate, and incredibly complex. So is her life story.

Angela was the victim of child abduction by a stranger, and all of the nightmarish things that go along with it, when she was a six-year-old in the 1960s. Beadwork, which she has been doing since even before that tragic event, became more than a hobby, it was a form of self-therapy.

“I’ve been through some heavy events, but I guess what doesn’t break you only makes you stronger.”

She is entirely self-taught. And yet, when she chose to leave her previous profession in banking to take up beadwork and restoration as her profession (after canoeing across Canada, for fun’s sake), she was immediately inundated with clients. 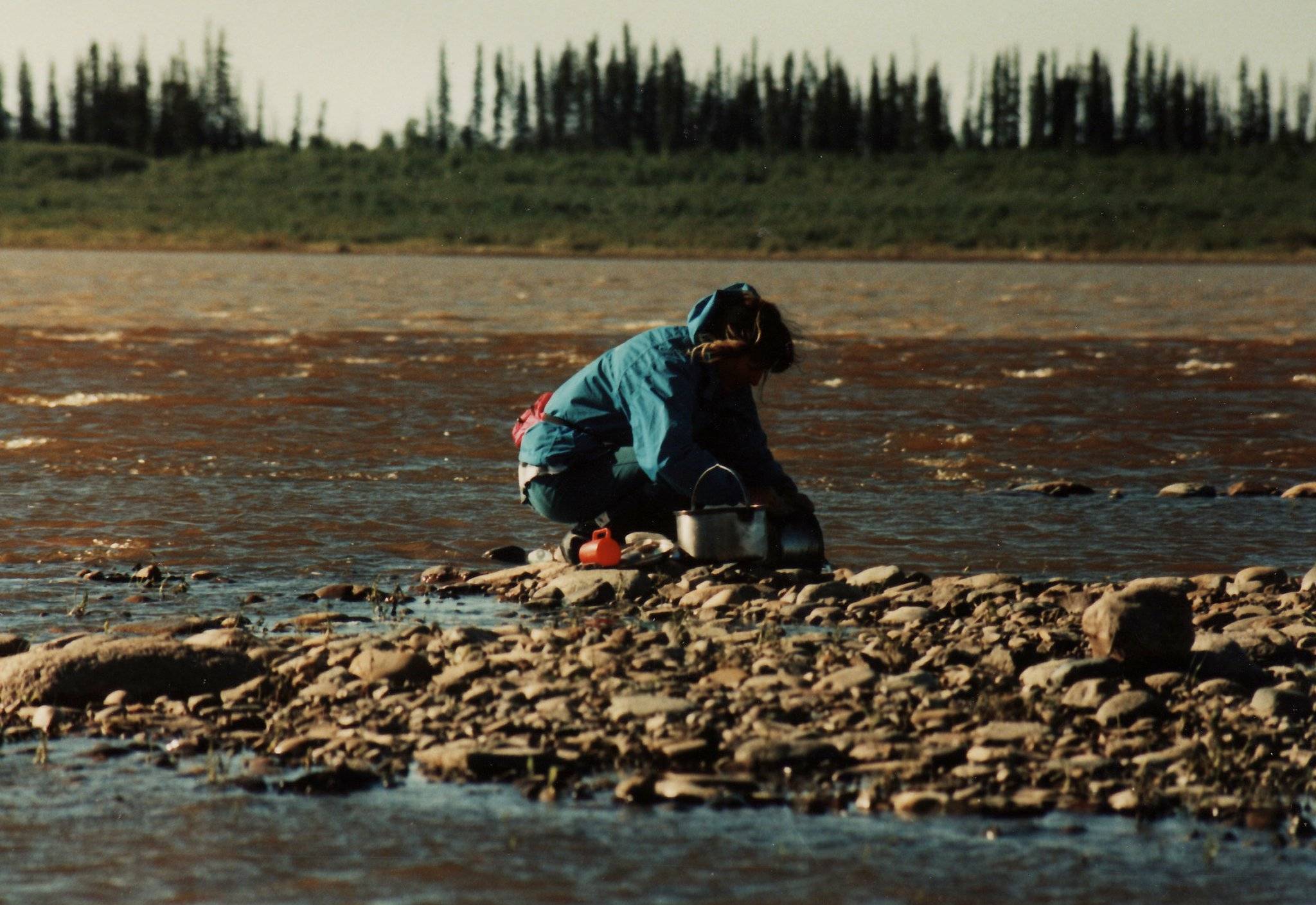 “I thought I would be going to craft fairs and setting up booths, but almost immediately, I had serious collectors coming to me saying, ‘My god, you’ve got skills. Can you also fix this?’”

She could, and she did. Soon after, she was being sought out by museums and top collectors to repair and recreate items for their collections.

While she spends the majority of her time restoring pieces for clients, Angela still makes time to create some one-of-a-kind masterpieces for herself. We are completely blown away by her interpretation of Space Cowgirl on this gorgeous black Tall Crown “Sugar Loaf” hat! But we were only half the inspiration. 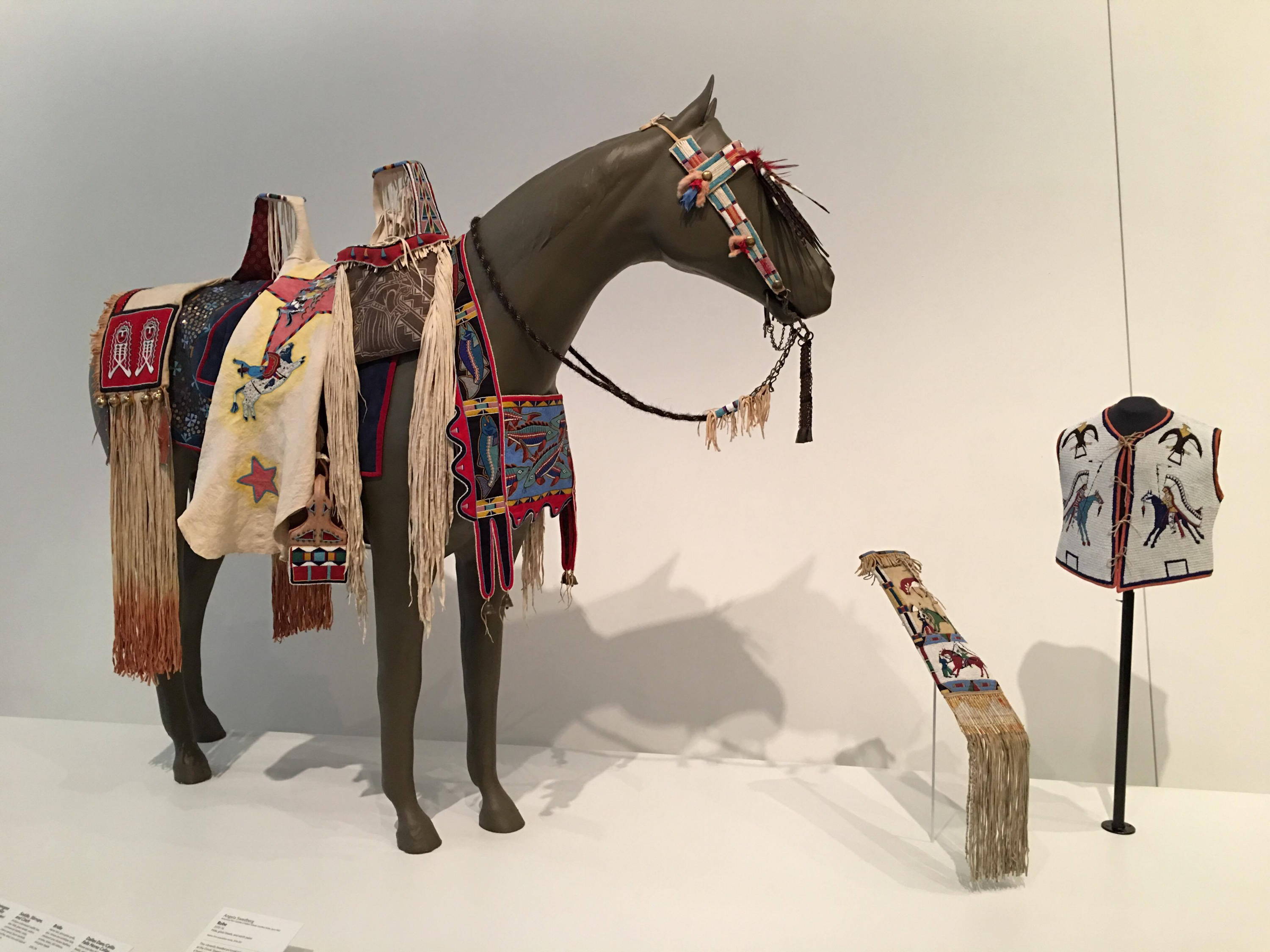 While she spends the majority of her time restoring pieces for clients, Angela still makes time to create some one-of-a-kind masterpieces for herself. We are completely blown away by her interpretation of Space Cowgirl on this gorgeous black Tall Crown “Sugar Loaf” hat! But we were only half the inspiration. 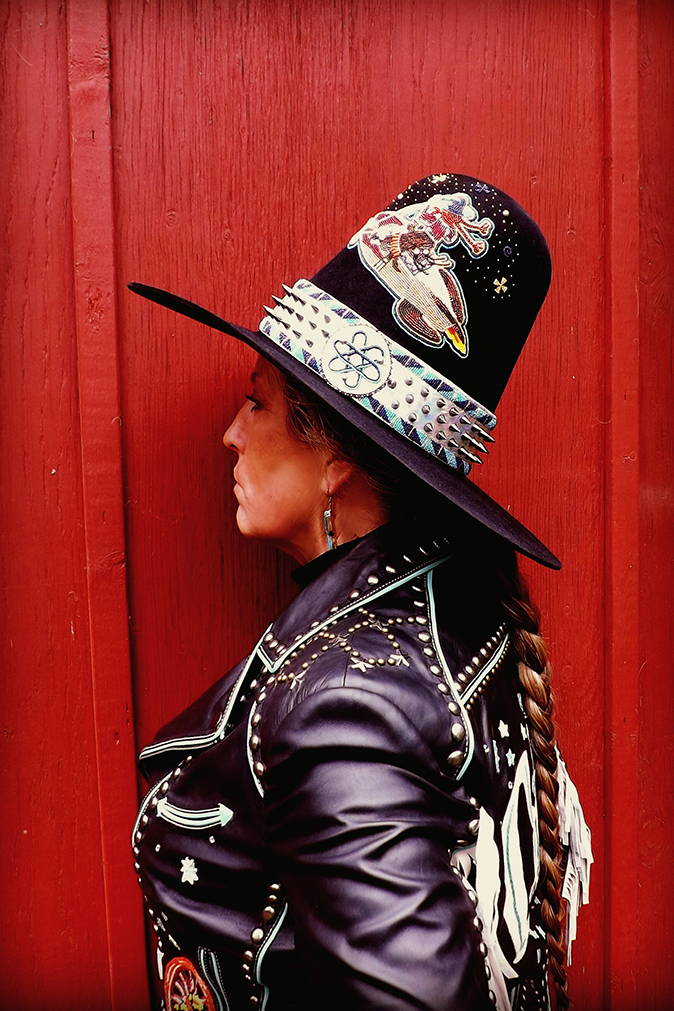 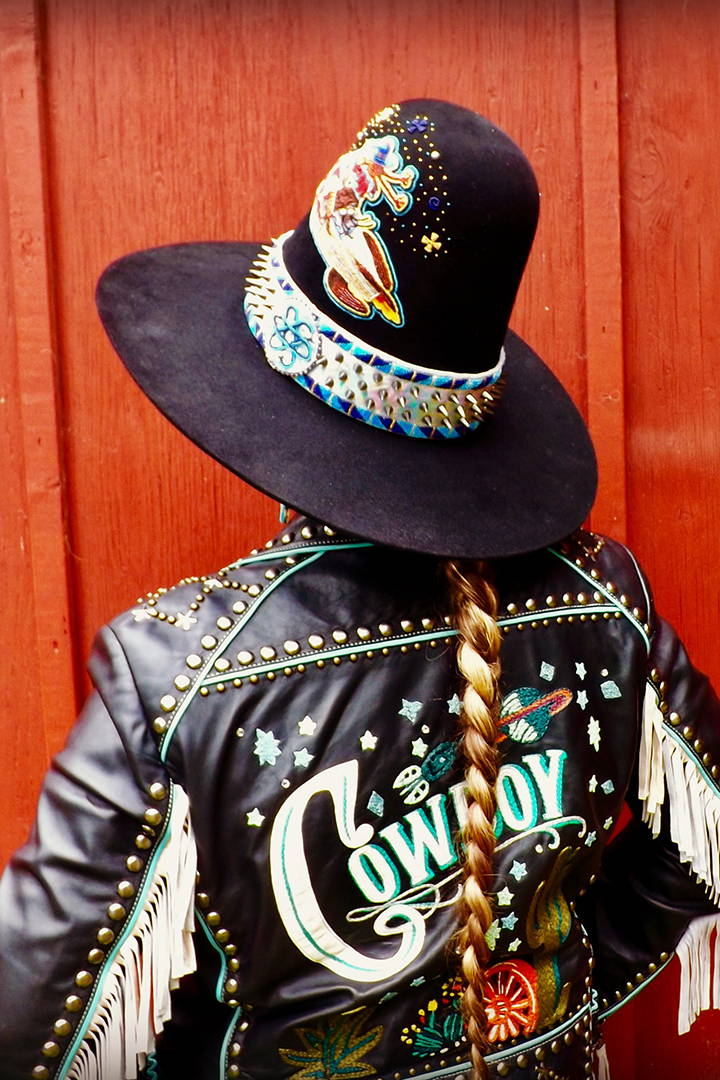 “It was a two-part thing. When I saw Cheryl’s sneak peek, I had some of these ideas in my mind already,” Angela said. “The other part was a wonderful woman who lived right across the street named Lawanda Dark. She was such a cool woman who made such an influence on me. During the moon launch in 1969, I was playing in the front yard and she called me inside and made me watch them walk on the moon. She said, ‘Come in and watch this. You’ll never forget it.’ She went from being an honest-to-goodness Oregon cowgirl to seeing men walk on the moon, all in one generation. I beaded that cowgirl riding the rocket; I was thinking of her when I beaded that hat.”

Angela used microbeads, 24-carat charlotte cut beads, and sterling silver beads on the design, which she said took her 80 hours to complete. We’d say it was time well spent! She likes to pair the hat with Double D Ranch’s Space Cowboy Biker Jacket from our Space Cowboy collection, and the combination is out of this world! 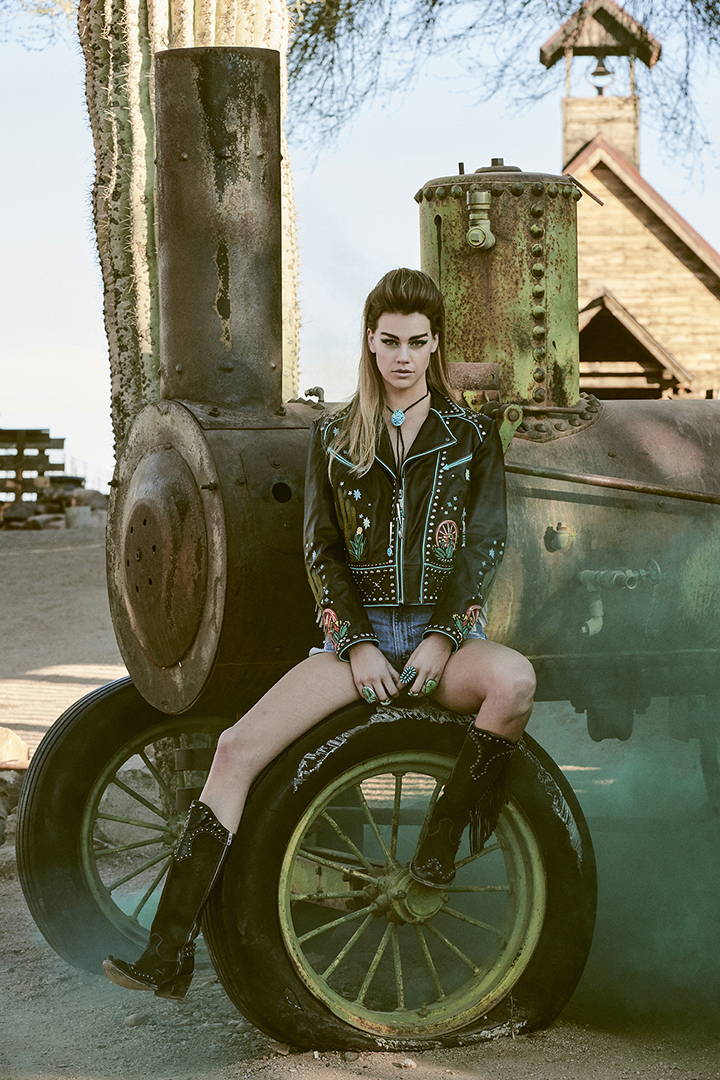 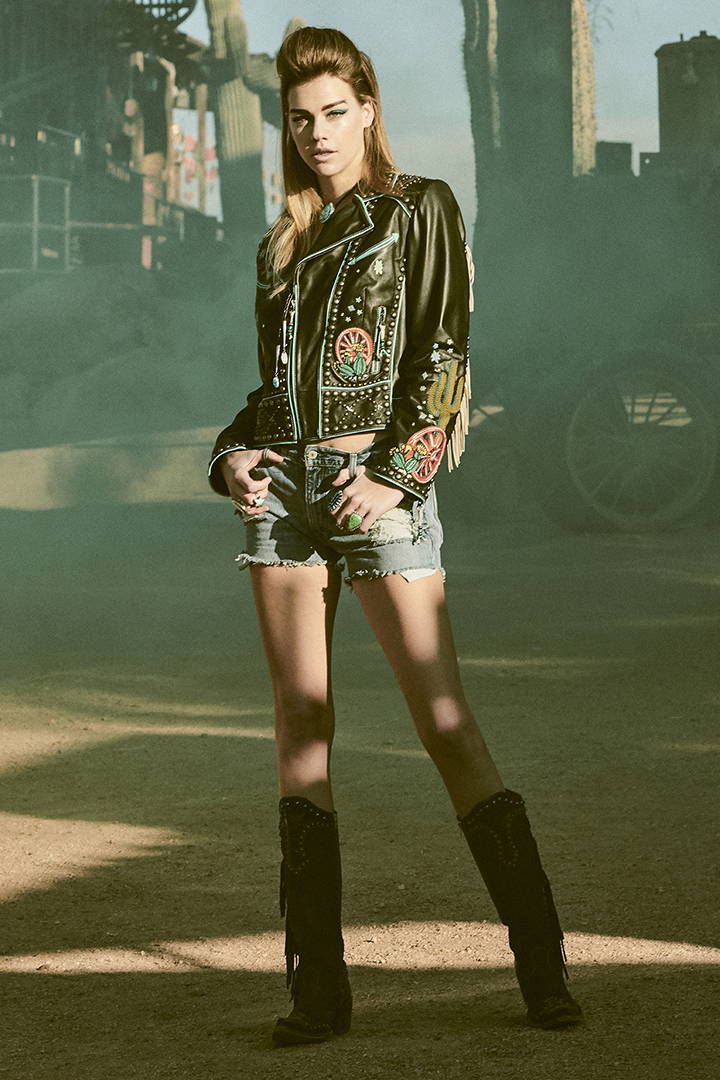 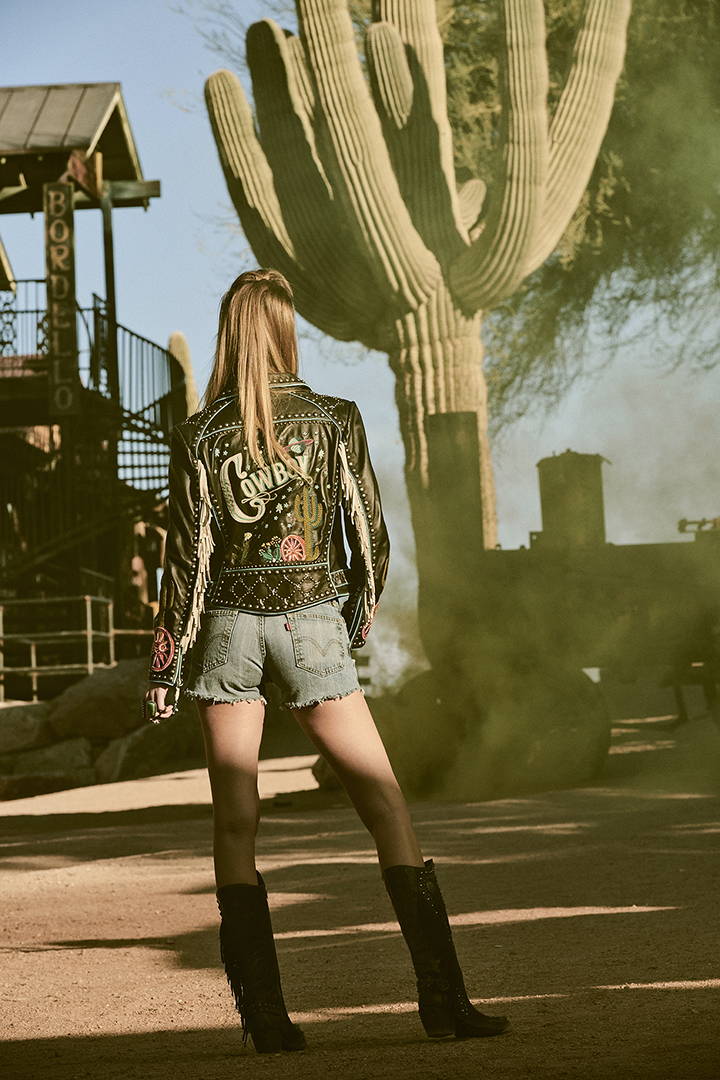