Recently, we’ve introduced you to a couple of the fresh faces from our catalogs – Quisha Matthews, Tori Monet, and of course, Penelope Joe – but we’ve been remiss in never having formally introduced to you our more familiar faces! So, without further ado, let’s get to know the stunning, sweet, and tremendously talented Kaylin Rogers. 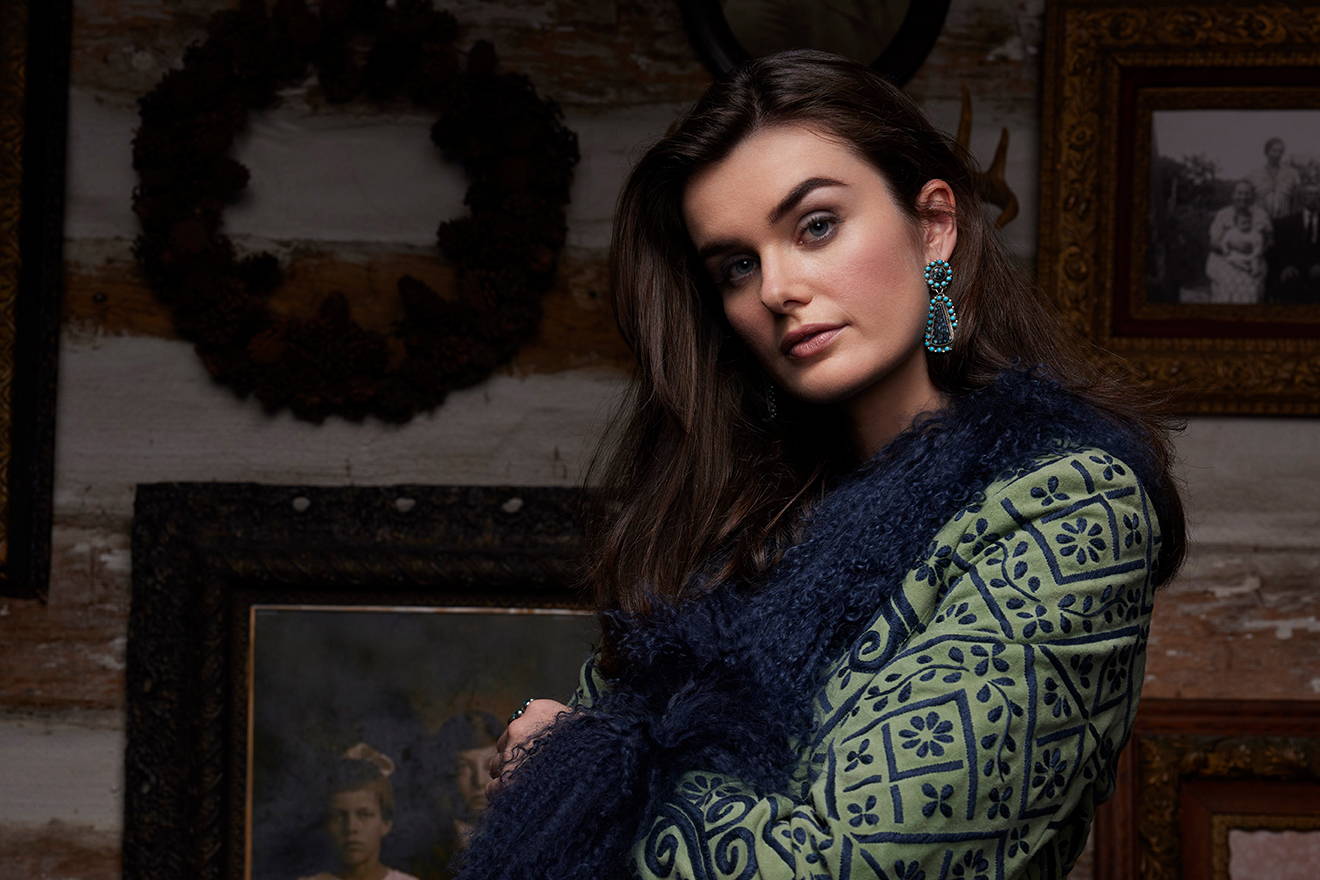 The 27-year-old is a Texas native – born in Dallas, raised in Allen, went to high school at Plano East – who has spent a good majority of her life in front of the camera.

“I have been modeling full time since I was 17 years old,” Kaylin said. “But in total I have been modeling since I was 8 years old. I spent many days in elementary and middle school going to shoots for JC Penney and other clients, bringing my schoolwork to set. My mom drove me and was there for me on every single shoot up until the day I could drive myself. She always made sure I finished my schoolwork on time and has not stopped supporting me as a model since the day I started. I remember getting into modeling after being scouted in a mall when I was around 6 years old. I did some sort of small fashion show in the mall, and I remember they wanted to shoot me for the cover of Dallas Child Magazine. The shoot went well, I decided I really loved modeling, and I signed with an agency a little while later.”

While she always had the support of her parents to pursue this passion, Kaylin says it never felt pushed upon her.

“I remember my parents always asking me if I loved modeling and being on set, and this helped me understand that if I did not like it, I could stop anytime I wanted,” she said. “But I loved it, and I always told them so.” 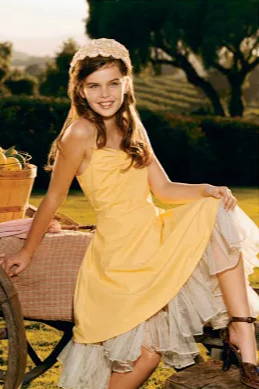 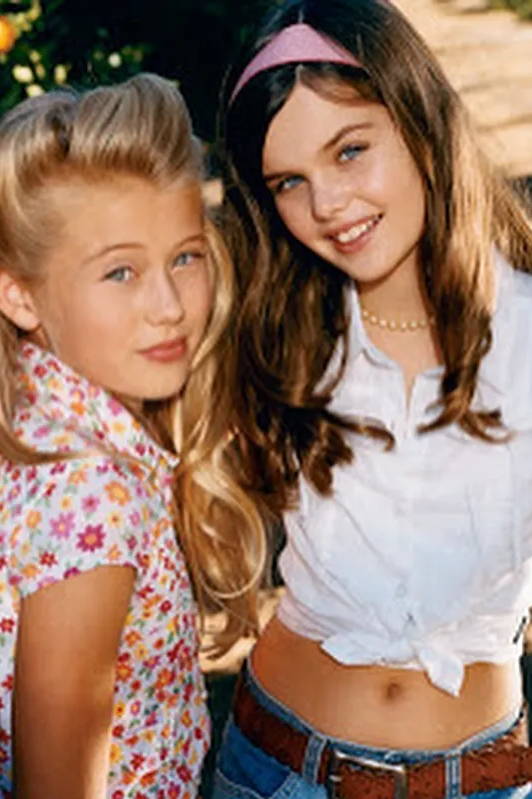 Kaylin is the oldest of three children and it seems like the industry has appealed to them all in one way or another.

“I have a wonderful family that has been there for me every step of the way and has always been supportive of my modeling dreams,” she said. “I have two younger brothers, Connor and Cole. Connor also started modeling when he was in high school, while my youngest brother, Cole, prefers to be on the other side of the camera making videos.”

You would think someone who has spent two decades having their picture taken and being published for the world to see would be the kind of gal who loves being the center of attention, but that couldn’t be further from the truth with Kaylin.

“In my personal life, I am definitely a huge homebody and more introverted than most people would expect a model to be,” she admitted. “I really have had to teach myself over my years of modeling to be more social with crew members as it’s not something that comes extremely naturally to me. I am thankful modeling has taught me to be more personable because it is really awesome going on to a new set and meeting people with different backgrounds and making connections with them. I have learned a lot, made so many friends from around the world, and met amazing people on set, one of my favorite crews being Double D, of course – in absolute honesty!” 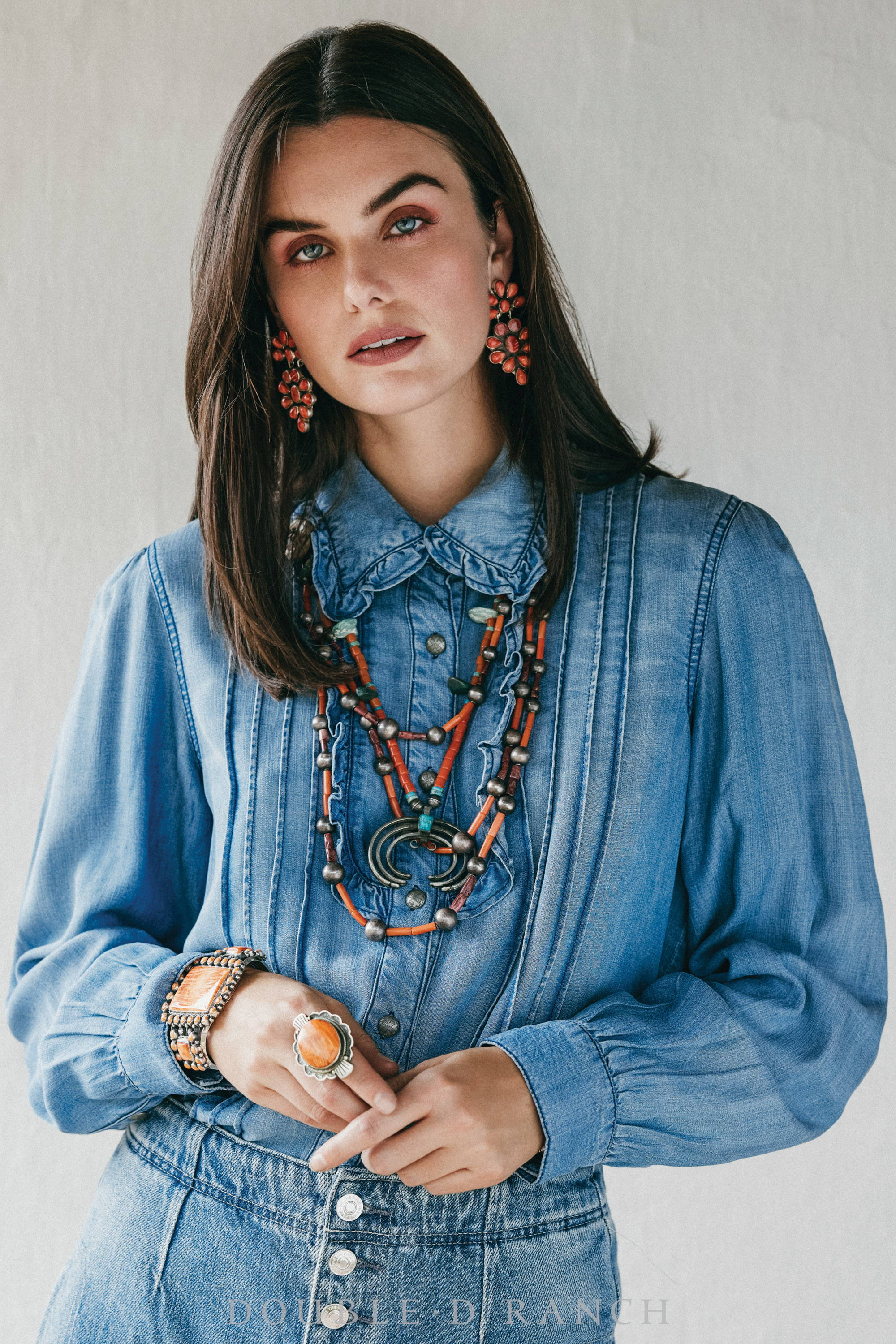 It's safe to say that feeling is mutual! Kaylin has been a darling of DDR since our first shoot with her nearly 7 years ago.

“Hard to believe I have been working for Double D since 2016!” she laughed. “Les Gauchos was my first catalog, I think. They have been such an amazing and loyal client to me over all these years. I remember the first shoot I did with DDR being on this gorgeous ranch in south Texas with horses, great scenery, and these beautiful all black outfits and fur coats. I also remember them doing all this hard work to set up this awesome tent scene in a dry riverbed area with a fire. The pictures turned out amazing all around and they have been an amazing crew to work with since day one.” 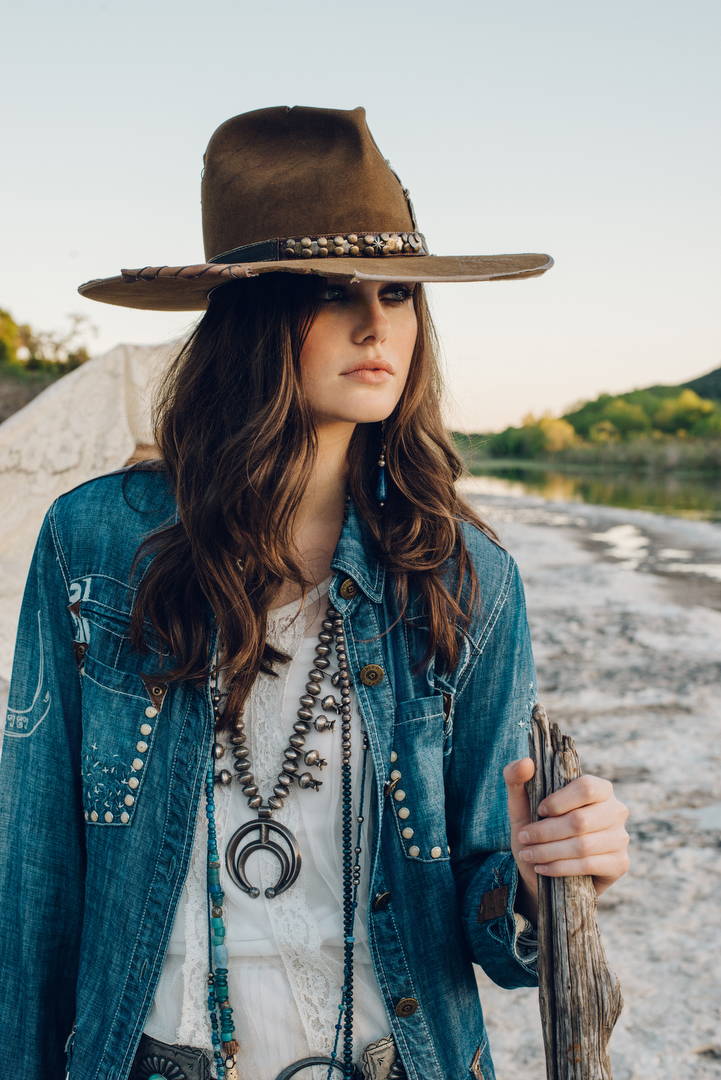 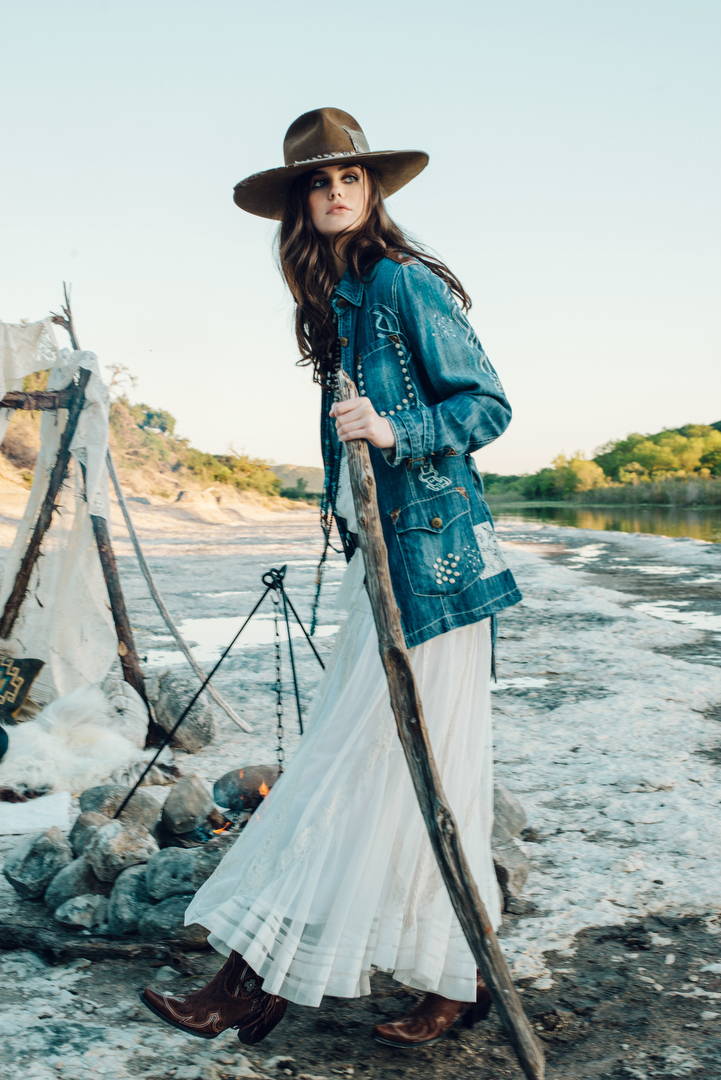 Kaylin has been featured in every catalog we’ve shot since that first one, and thankfully, she seems to love it as much as our camera (and team) loves her.

“Every time I leave for a Double D shoot, I know I am going to get to wear beautiful clothes and jewelry, travel to a cool location, work with talented, hard-working people, and make fun memories,” she said. “The Double D family is always there to take care of me on set and seriously, every one of the Double D shoots I have been on have been a favorite of mine. No matter how hot, how cold, how windy, how crazy, or how long the day is, the crew never fails to make it a good one regardless.” 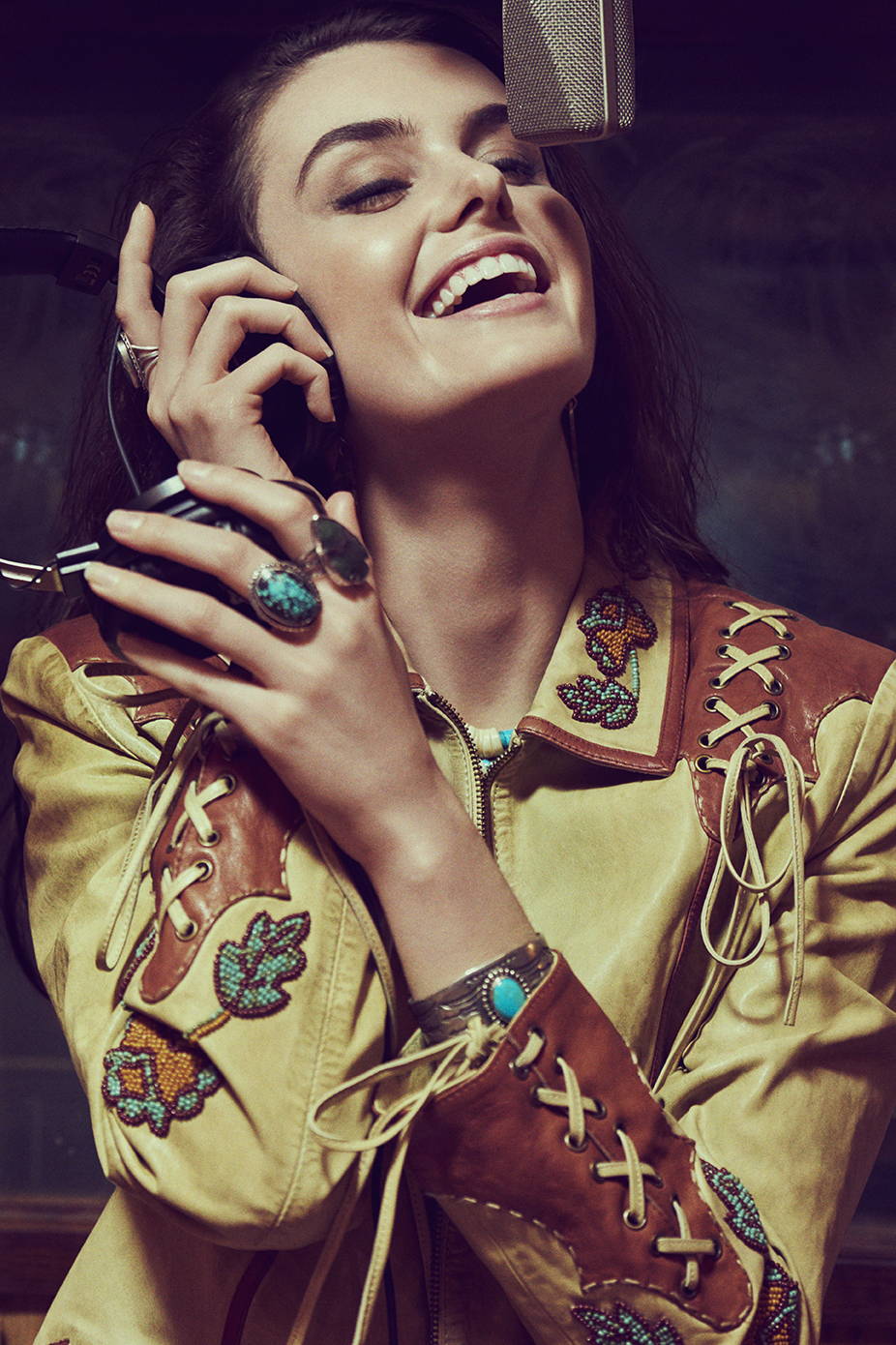 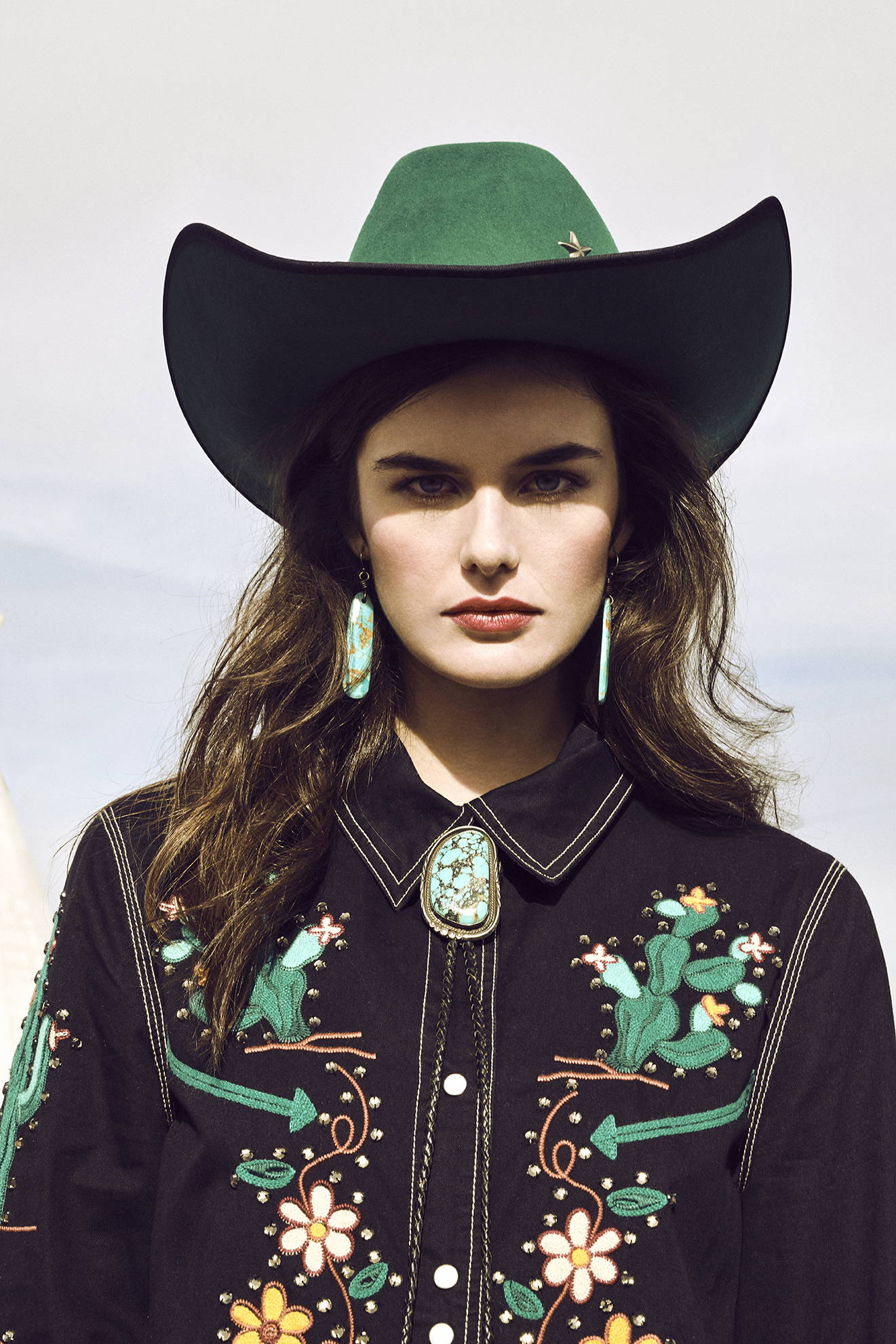 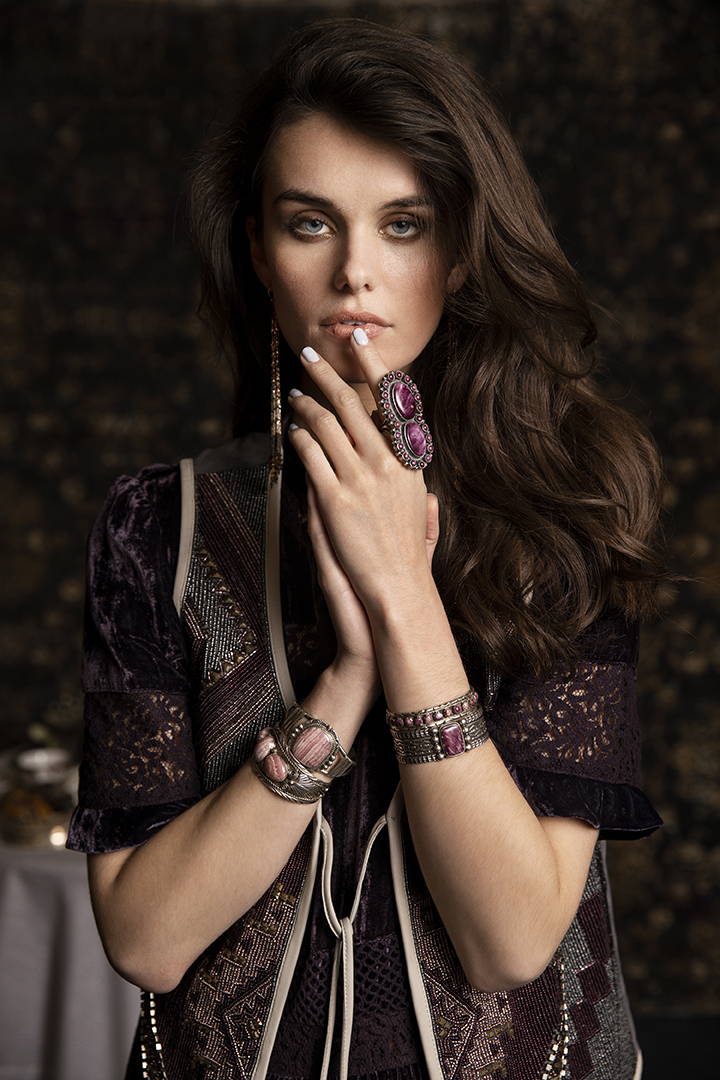 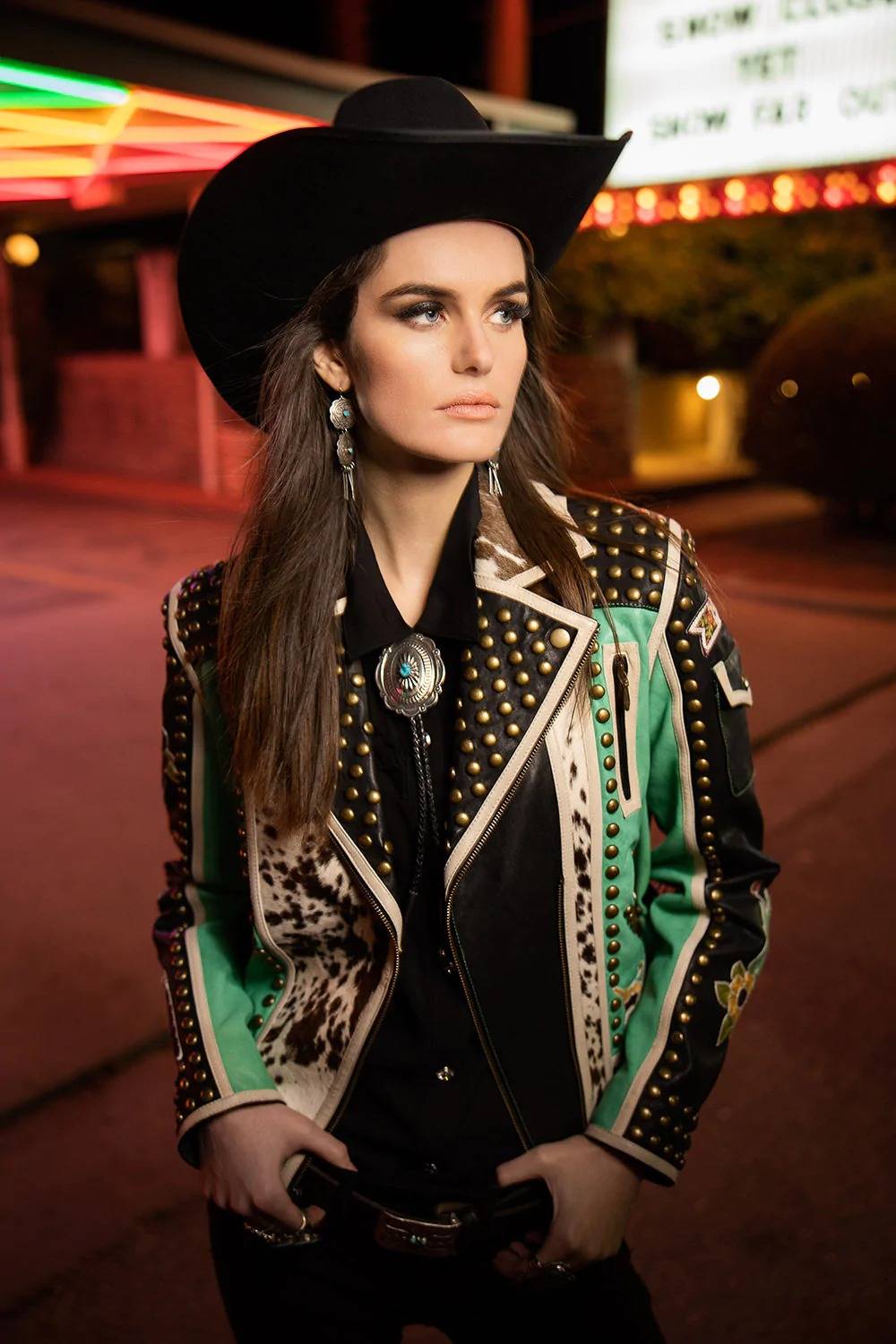 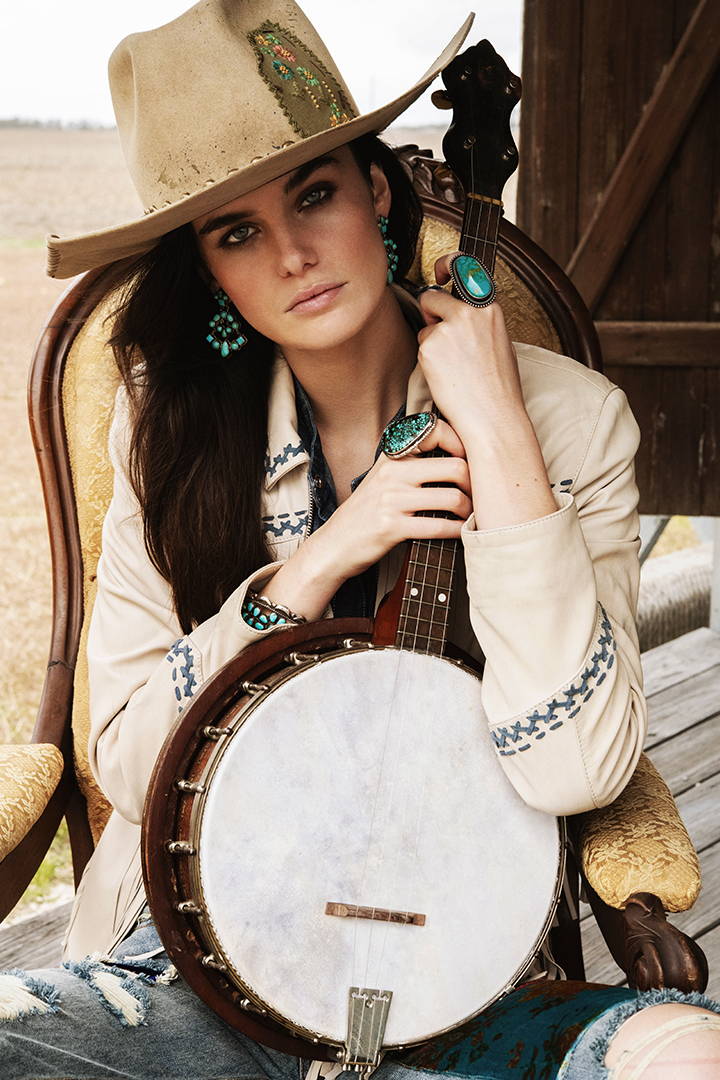 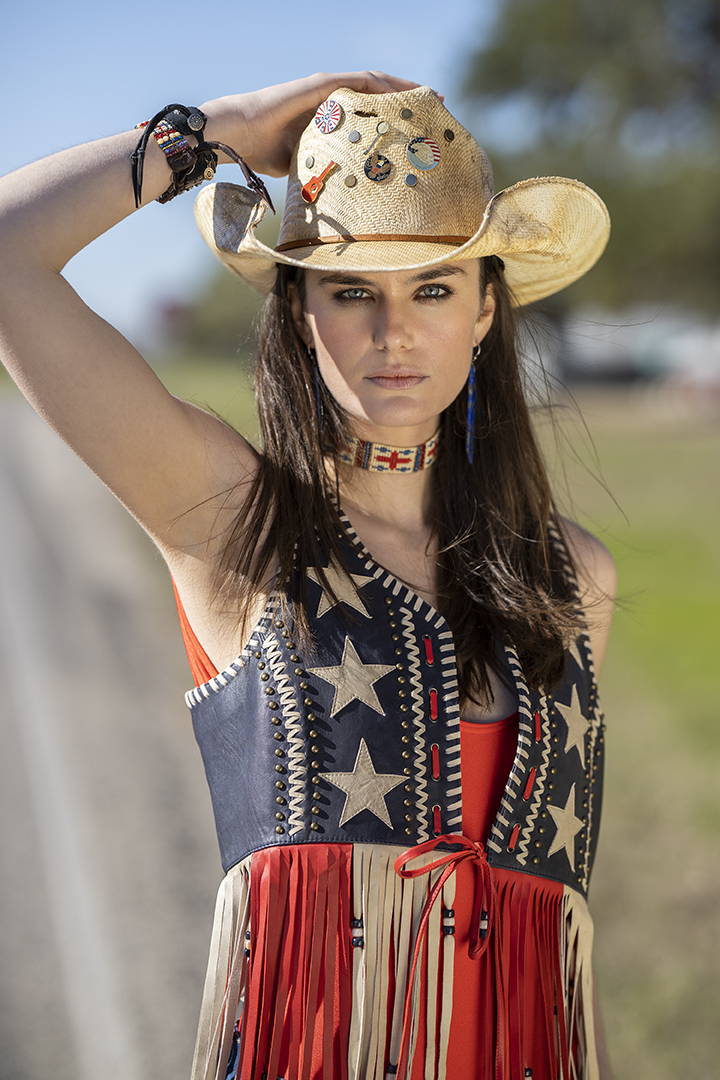 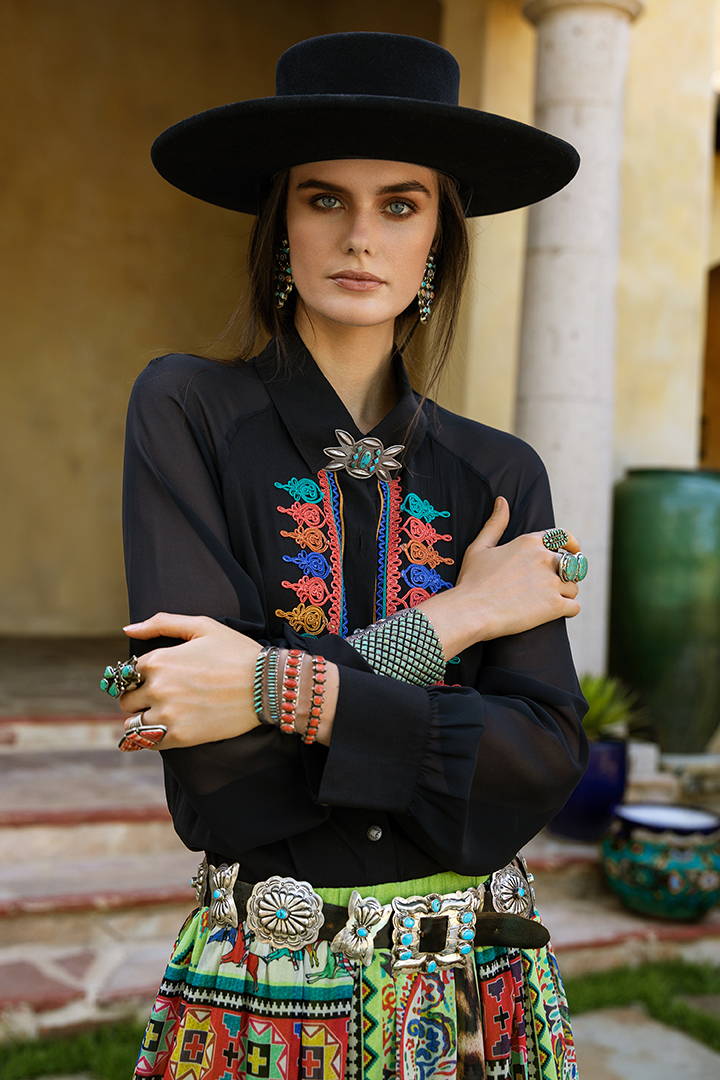 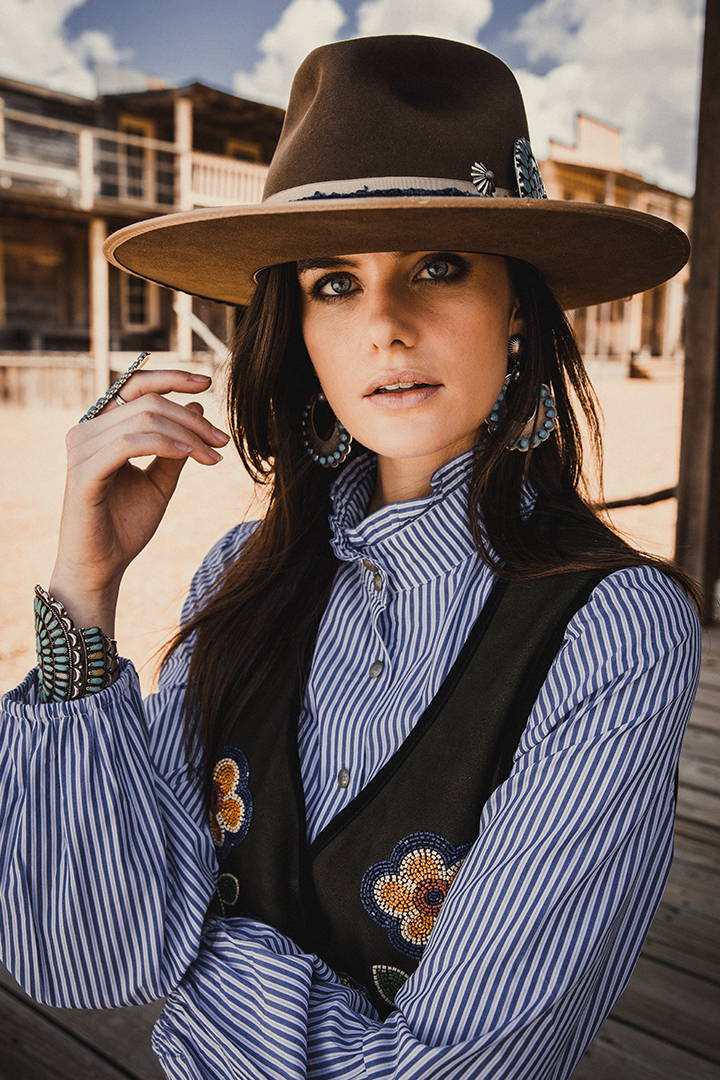 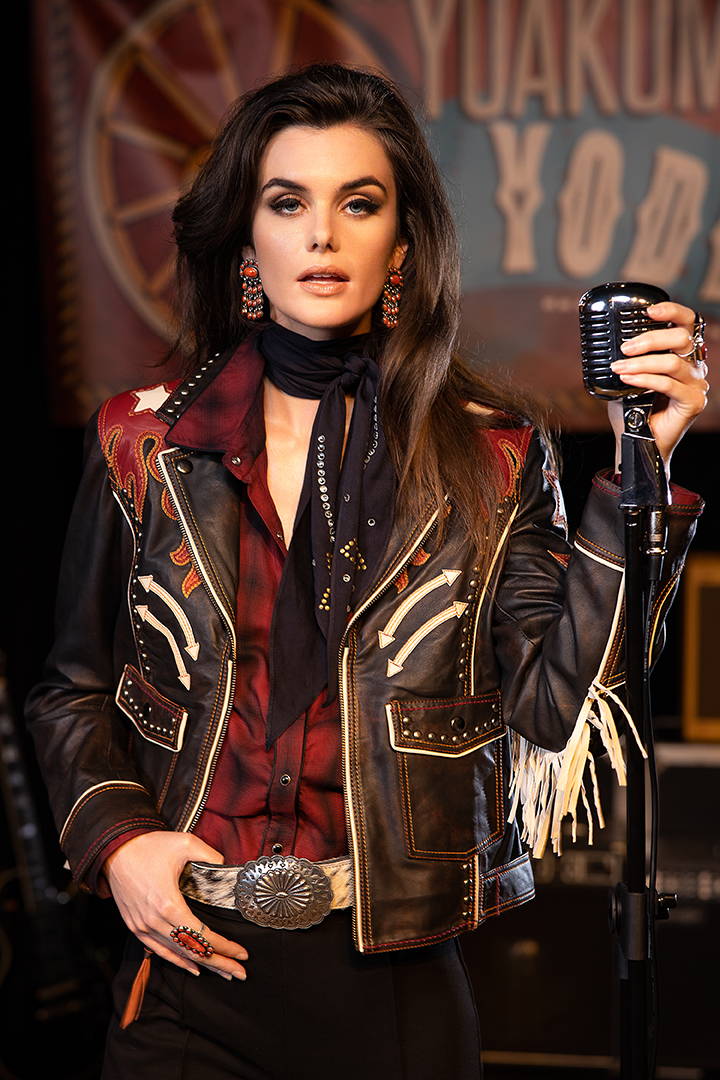 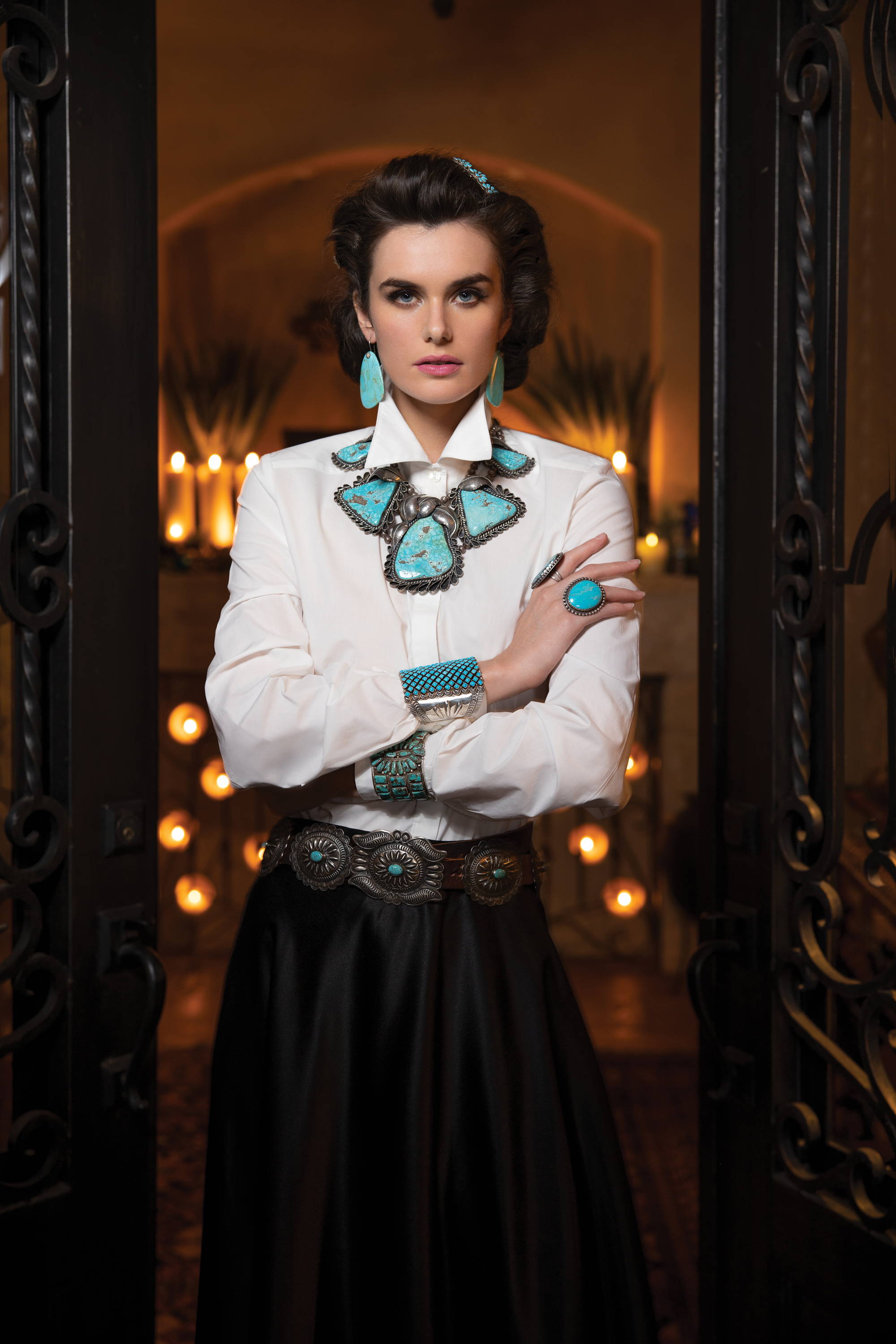 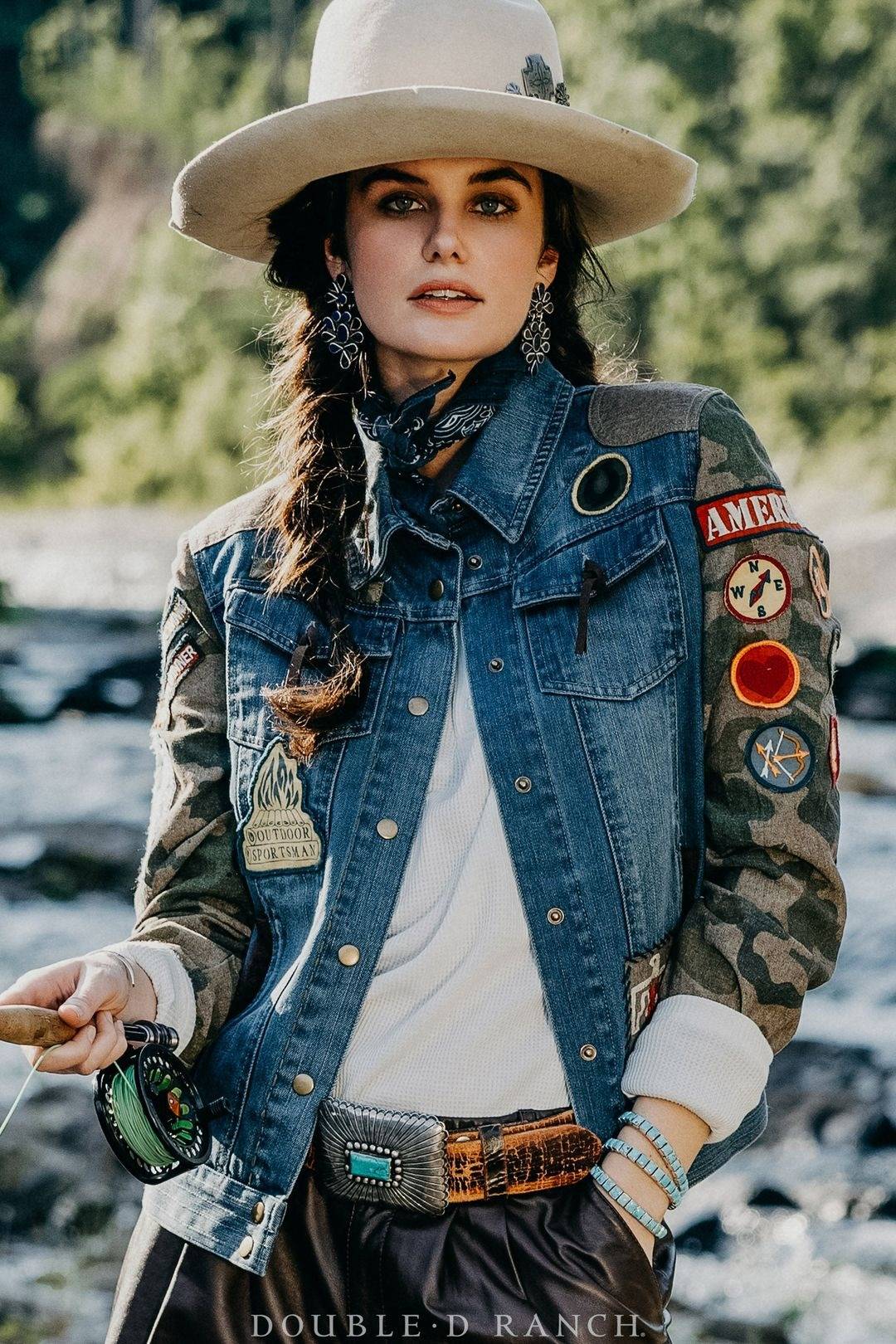 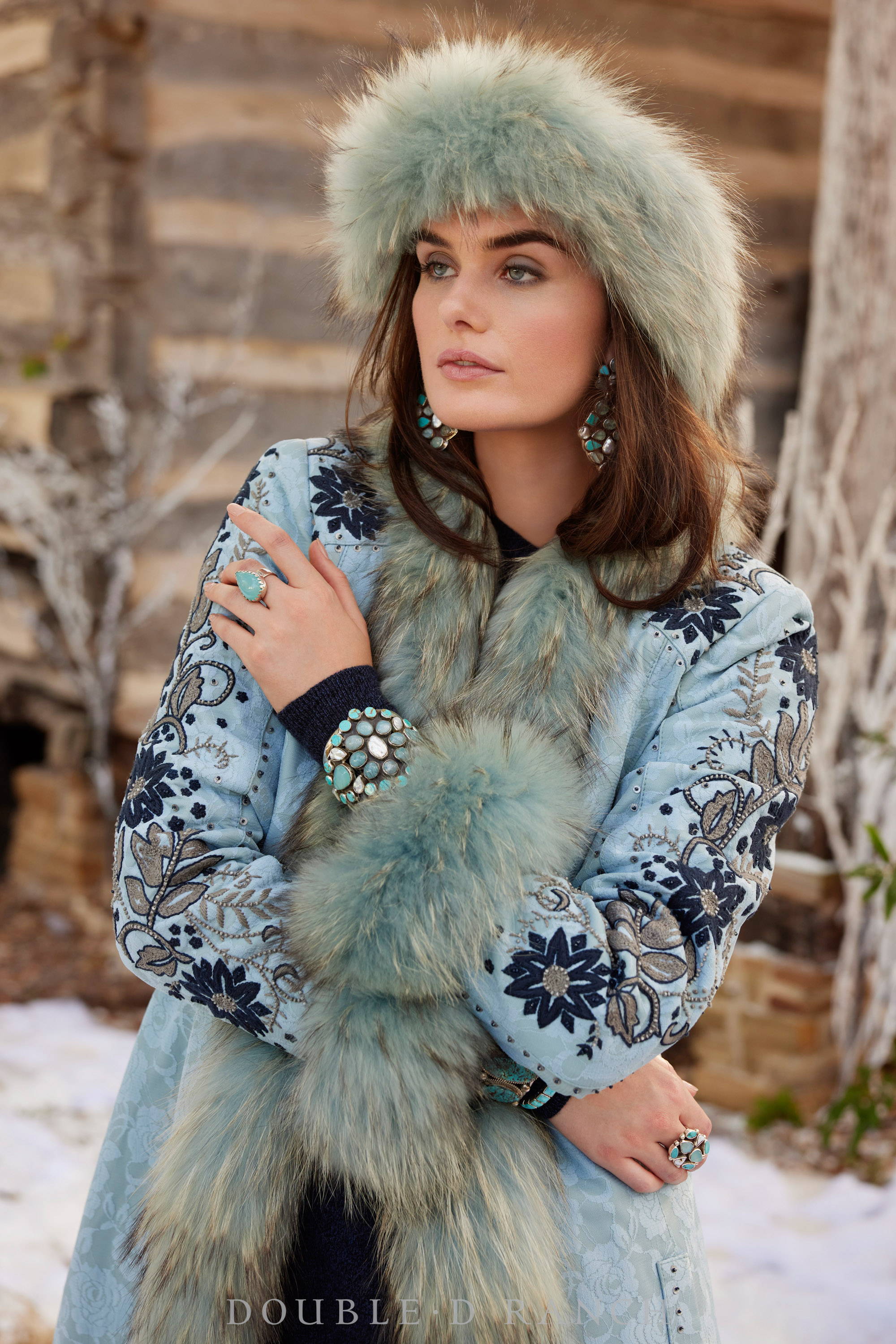 That’s awfully high praise and we hope she means it, because we do ask a LOT of our models and they always oblige, so we sometimes wonder if deep down they hate us! (Only joking – no matter what, there are always lots of laughs on set and they keep coming back, so we must not be TOO bad!) She says she’s loved them all, but Kaylin does have one shoot that stands out as a favorite.

“I would say that the Double D collection that I particularly loved was the Cody collection. I really liked the brown and rust tones, the patterns on the outfits, how tailored and fitted some of the looks were, and the overall western vibes of the whole shoot,” she said. “I think the outfits plus the location itself made it one of my favorite collections. It is actually one Lozzie and I still talk about how much we love to this day.” 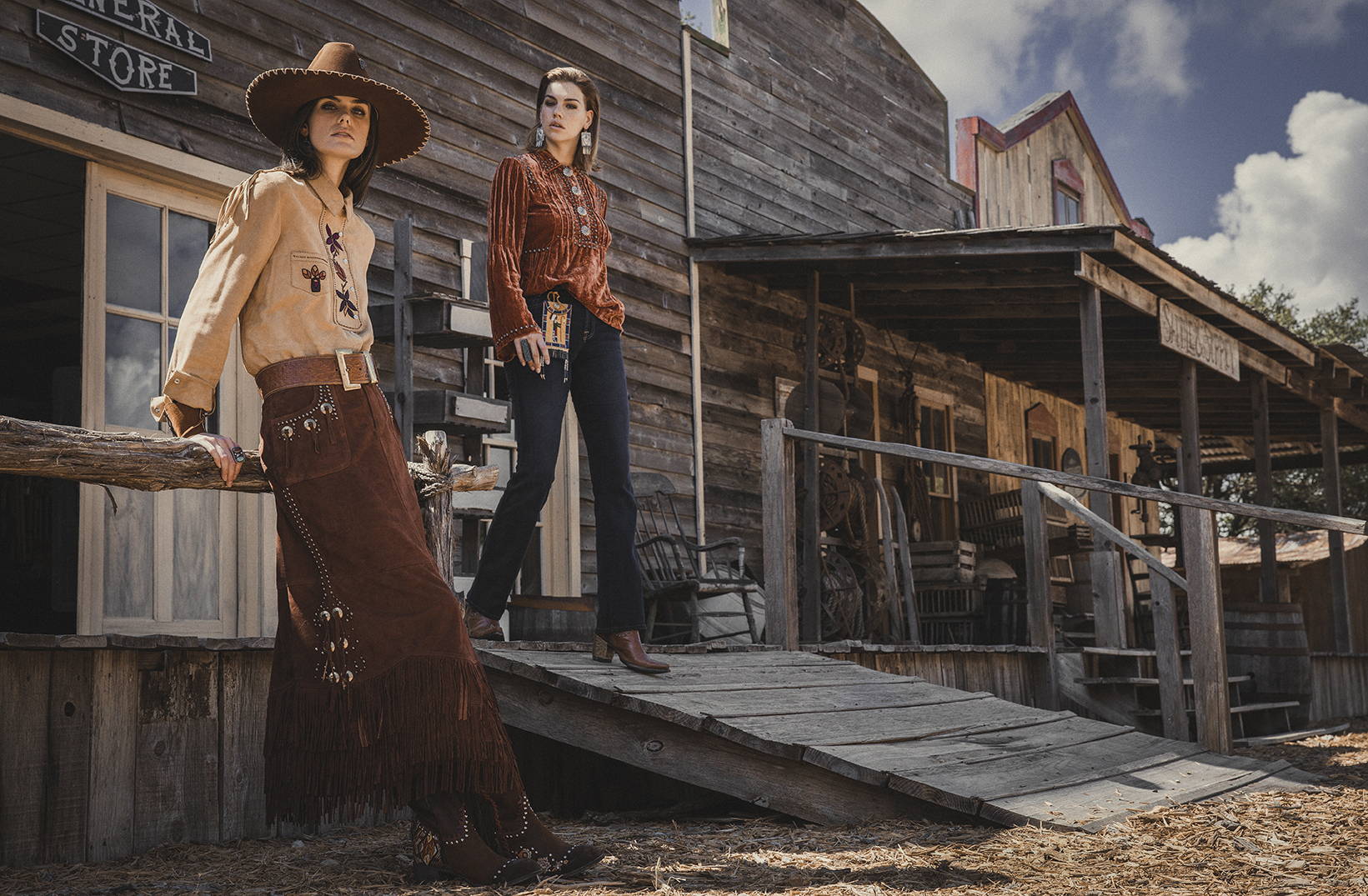 Speaking of favorites, Kaylin has dubbed the Rainbird Collector Jacket and the Cattleman Boot (of which she owns a pair) are among her all-time DDR top picks, and as for Little Mary, the Old Billy Blouse is at the top of her list.

“I wear a lot of button-ups in my day-to-day wardrobe, and I really like the pattern and colors of this one,” she said. “I also like how you can dress it up with a nice blazer or fur coat, or you can just wear it with a pair of jeans to make it more casual.”

But enough about us! What are some of Kaylin’s other favorite things?

“Fun Fact about myself: I absolutely love cats with all my being,” she shared. “I have grown up with them my entire life and have always been a cat person. I do have my little baby kitty named Hunter who I adopted in July and is my world. He is almost 10 months old and is a little American Bobtail. Another fun fact is that I love gothic horror novels; it is my favorite genre, and I am always on the hunt for a new author who can really grasp the gothic horror theme. My favorite authors are Edgar Allan Poe and Michael McDowell.” 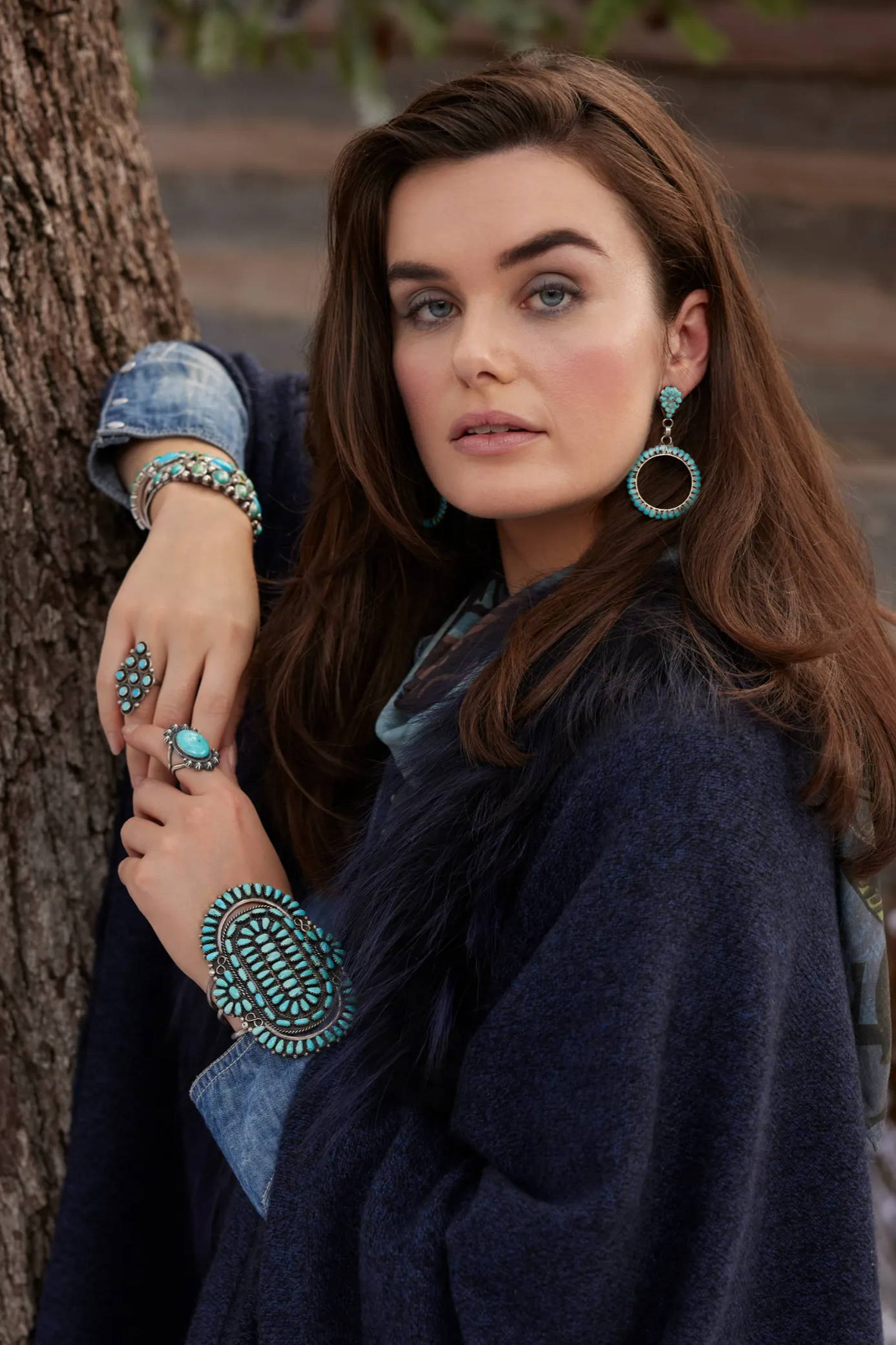 We’re sure you’ve picked up on this by now, but Kaylin is beauty AND brains. Even on set, she’s diligently using her (very limited) downtime to study and she’s on track to developing options for herself.

“I plan on modeling for as long as I can,” she admitted. “But another career path I am working towards is one in counseling psychology. I have always been really fascinated with psychology and I love the idea of being able to help people with their mental health and teach them how to understand it, take care of it, and nurture it. One thing that I have learned in the modeling world is that mental health is everything, and that working with yourself little by little every day to maintain a supportive and healthy mindset is one of the best things you can do for yourself.” 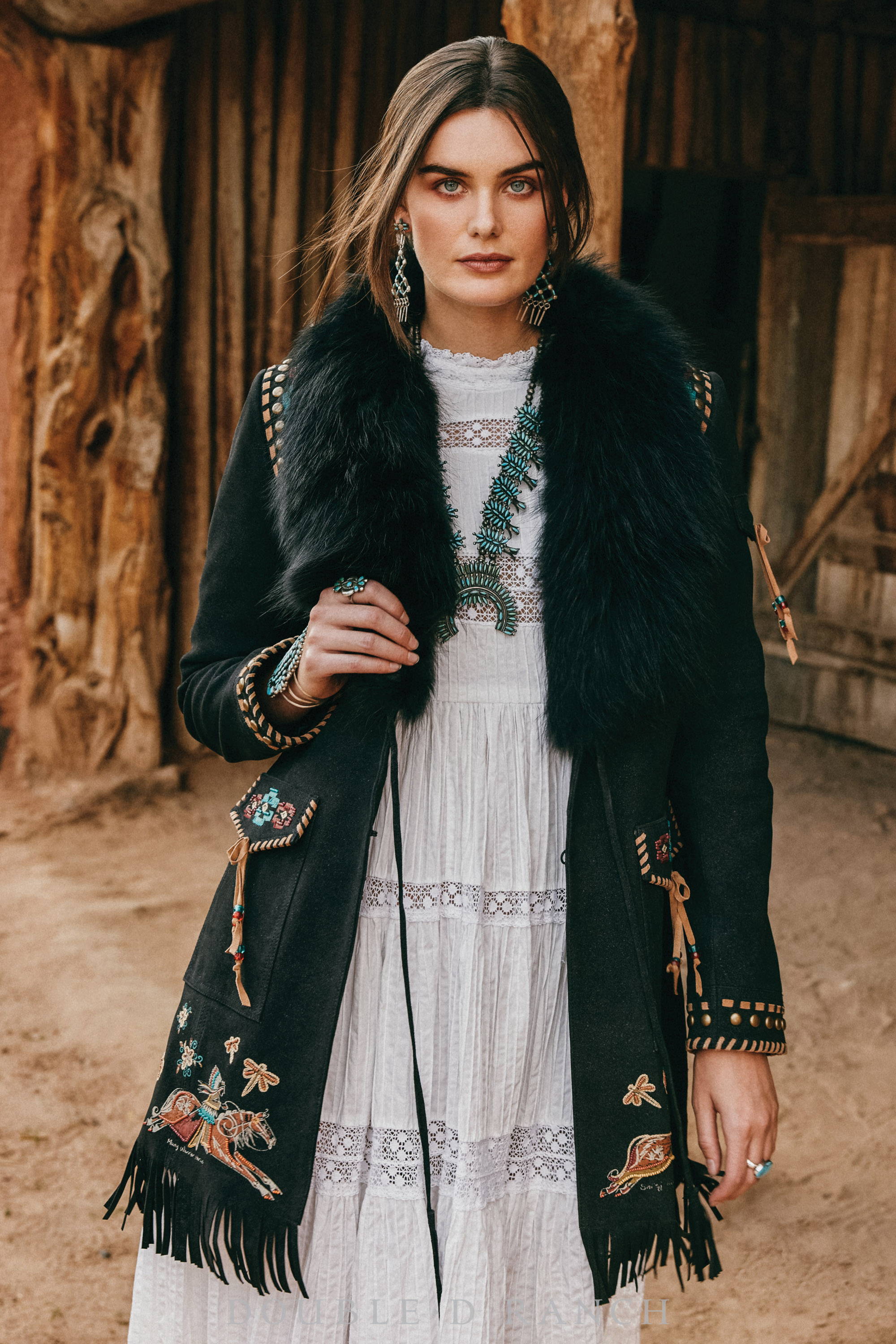 But at the end of the day, even after having done it almost her whole life, modeling is still Kaylin’s first love.

“Modeling is a career that I am thankful to have been given the opportunity to pursue and I would choose modeling as a career path over and over again.”

If you’d like to keep up with Kaylin on social media, you can find her on Instagram at @kaylinrogers

How interesting to read about Kaylin Rogers, Double D model. I have been wearing Double D for thirty years and have always looked forward to the styling of the collections, the models’ individualities and the locations chosen for each collection shoot. Living in Texas, all of the above is so special to us—it what Texans know and love! As a Dallas girl, Kaylin is not only beautiful, but she is a smart business woman with her feet on the ground. She loves where she has been professionally and knows where she is going!! What an asset for Double D!!

She is breathtakingly beautiful. She shows the clothes so well!

~ Thank you, thank you, my prayers were answered. I emailed DDR a short while ago about doing a piece (in Double Talk) about Kaylin Rogers, my all-time favorite model. Thank you for giving us insight into her life and personality. The fact that she L=O=V=E=S cats is amazing. I love them too, and my husband and I have two girls: a black kitty named Ari’el whom my husband says has a bikini bottom and is my girl. The other is our tortoise shell kitty, Brenda (she’s shy and every bit “Daddy’s girl.)” Looking forward to your next collection launch, Billy the Kid. Cheers! ~

She is a beautiful soul and we have been blessed to have her on our team !

Kaylin my favorite but I will say the blonde model you use is also a favorite. They ARE the face of DDR. Looking forward to new collection.