BEHIND THE SCENES OF BAKERSFIELD

Man, we’ve been behind the scenes a lot lately, it seems! The photoshoots this year have just been too good not to share. (Y’all just wait for Willie’s Picnic!) The Bakersfield shoot went relatively smoothly, but none of our excursions are without a few adverse conditions and interesting encounters. So, here we go!

Here’s something you may or may not know about photoshoots – or at least may not have considered: you shoot collections in the opposite season of when they launch. So, that means you’re shooting big furs and leather jackets in brutal summer heat, and you’re photographing little sundresses, tiny shorts, and tank tops in the windy, blistering cold. The Bakersfield shoot was the latter. Our poor models were doing their best to keep from shivering during their takes, wrapping up in double Cactus Cat Jackets in between. And we may have had to photoshop out more than a few goosebumps. 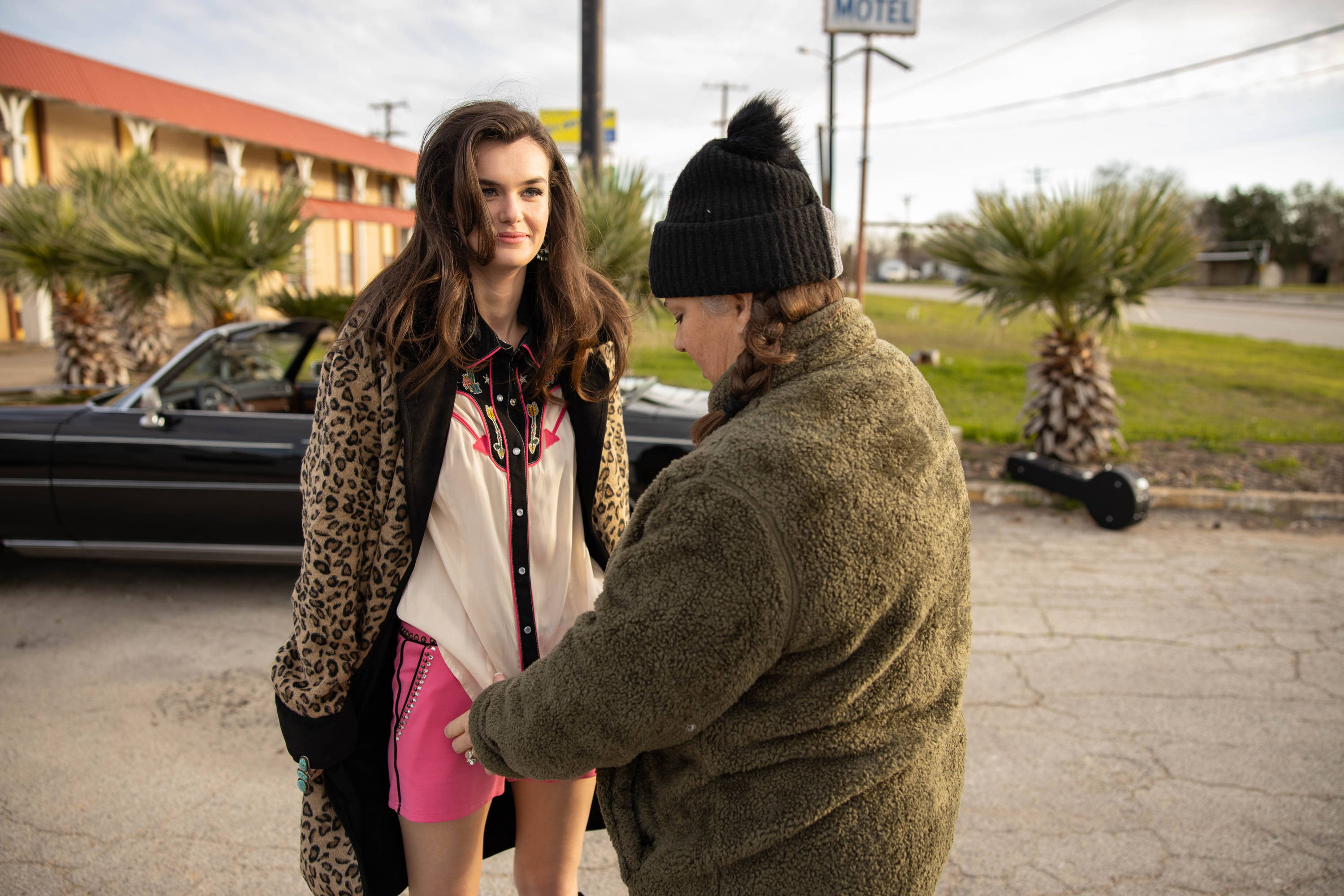 Our first location was at the Woodfield Inn in Yoakum. It’s recently been renovated by the sweetest little family who adorably kept reassuring us, “Not much to look at outside, but it’s very good inside!” It really was, the rooms were very modern and clean. But there was a minute there when we thought we might not even get to see the inside, because someone had put the key in the hands of the woman who notoriously can’t keep up with her own Chapstick. “Where’s the key to 104?” “I gave it to Cheryl.” “Why?! That was dumb.” We found it shortly after and put someone else in charge of it. 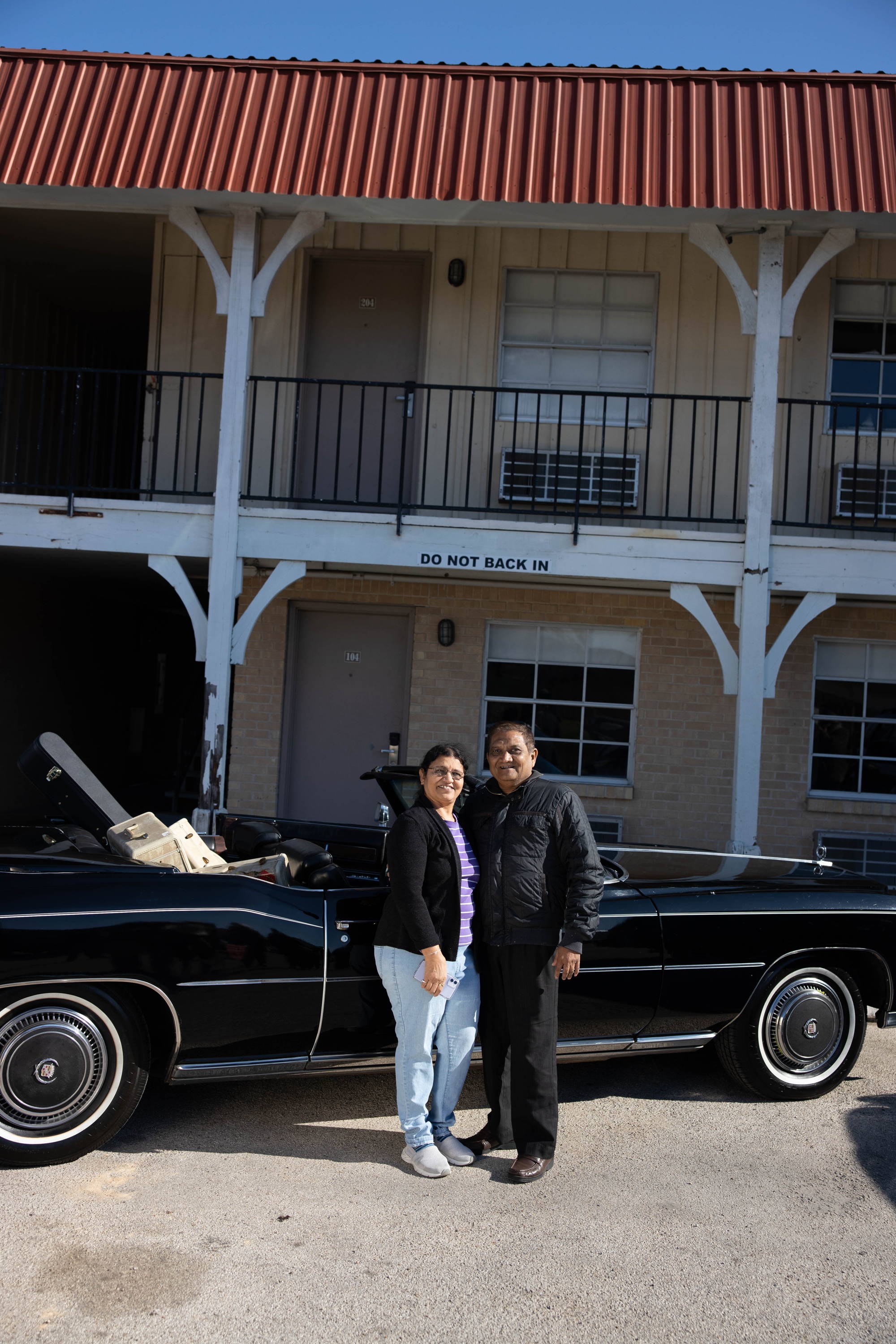 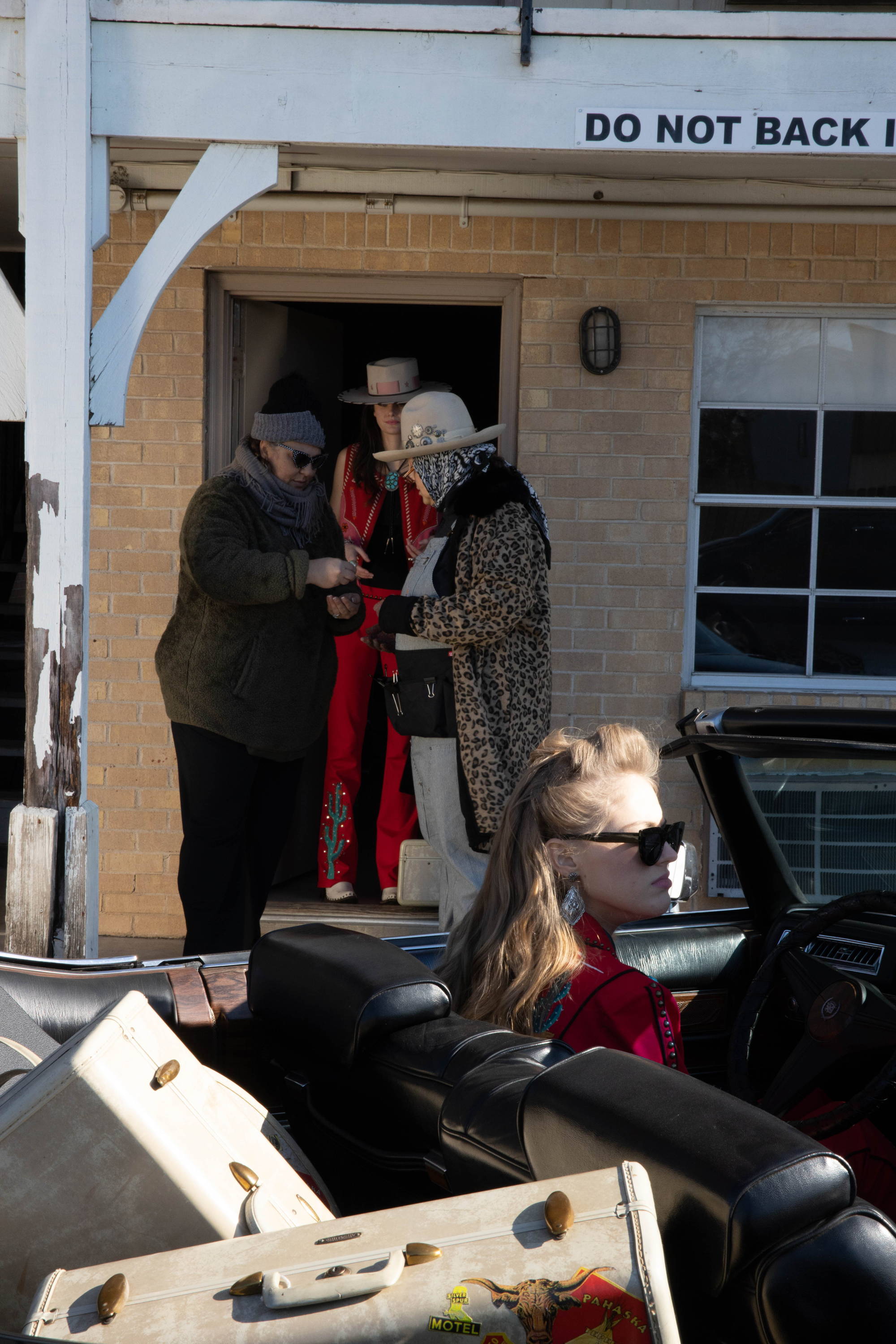 When it comes to photoshoots, everything we do is a production: we generally roll up to a location with about 10 cars, 20 people, and a 50’ trailer. In a town the size of Yoakum, you can bet that kind of entourage draws a little attention. Well, if you really want to turn some heads, try putting a couple of tall gorgeous models in skirts on the side of the road at a small-town gas station! There were a lot of screeching tires and almost-accidents from people rubbernecking to check out our precious Kaylin and Kate. (But no actual collisions, fortunately.)

We also drew the attention of some curious kids. As you might imagine, a trailer full of clothes and jewelry parked on a residential street really piqued the interest of these two darling young gentlemen on their way home from elementary school. They were full of questions and curiosity and Hedy, who is usually stationed in the trailer during shoots to pull outfits and jewelry, let them explore, answered their inquiries, and gave them a general overview of what exactly it was we were doing. And then they had some snacks, and went on their merry way. It was pretty precious, and definitely a first. 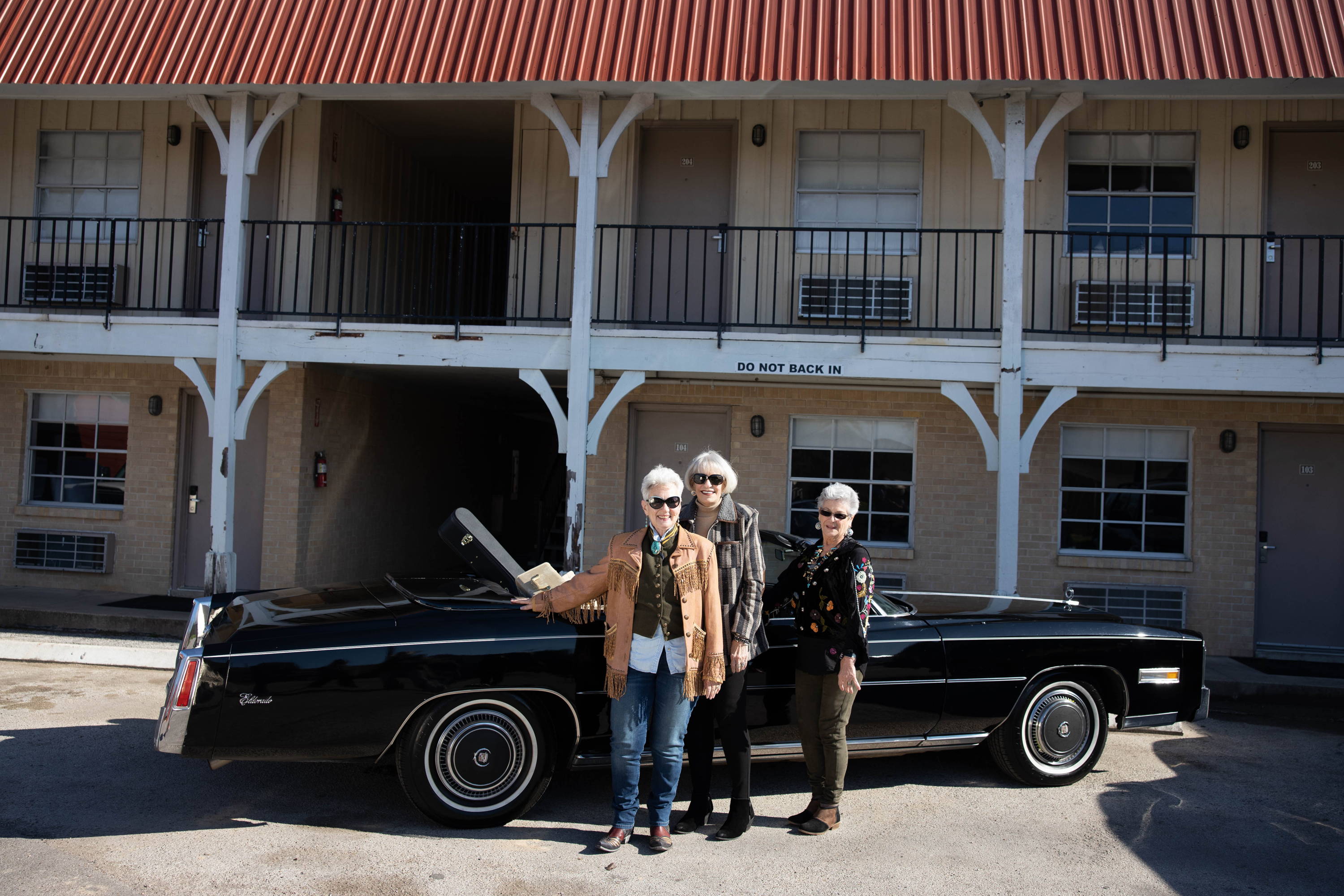 Much of the Bakersfield catalog centered around that sleek black vintage Cadillac convertible. We coordinated a deal with the owner of that beautiful machine, a man named Khalid, who kind of became a part of our entourage for the day, parking and positioning the car, and at one point – because lighting is everything – he graciously disassembled the sun visors in order to prevent shadows on the models faces during their “road trip”.

Speaking of their “road trip”, that was a comical smoke-and-mirrors endeavor in itself. It’s obvious when you really stop to think about it, but it probably didn’t occur to the average person flipping through a catalog that it’s impossible to photograph someone actually driving a car. So to capture those shots – which came out so beautifully believable – we loaded the Cadillac on to a trailer that was being pulled behind a flatbed truck. Our crew (Mitchell and Cheryl and Audrey) climbed up on to the flatbed with the camera and the preview iPad, and we positioned Kaylin and Kate as driver and passenger, and slowly drove a little loop around an empty field in Yoakum snapping shots as if they were headed down the highway. While we certainly weren’t going fast enough to be dangerous, it was enough to take off Kaylin’s hat a time or two in her stand-up shots! 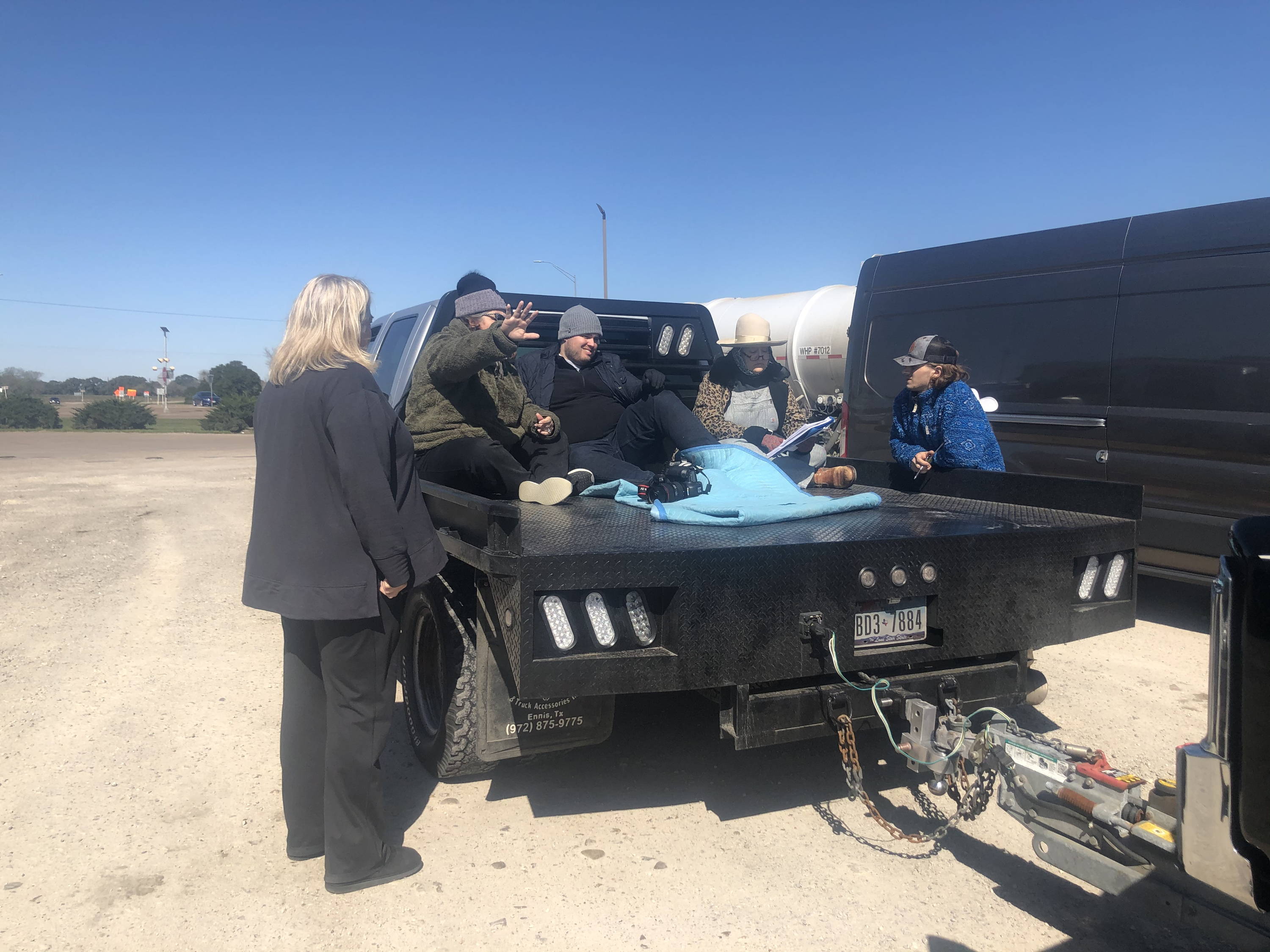 In addition to having a way to transport and store all the merchandise, one of the main purposes of that 50-foot trailer we haul everywhere is climate control for the models. Again, we’re always in the opposite season of the clothes we’re shooting, so the trailer is a respite where the models can either cool down or warm up between their shots. But in order to run the AC or heater, it needs power. While it does have the capability to run on a generator, it’s not ideal, so it’s a constant quest to find sources of electricity. Usually, we’re near enough to an edifice that we are able to plugin, but that also has its challenges. Sometimes we have to plead, pay, or even trade out gift cards to plug into their electricity. And on this particular day, we accidentally knocked out the power to an entire Valero. Whoops.

All in all, the Bakersfield shoot was fairly drama-free, and it resulted in one of our favorite catalogs. We’re calling it a win.